Bats are fascinating creatures, playing a critical role in supporting biodiversity. Because they consume their body mass in insects every night, bats also fulfill an important role in the control of nocturnal insect populations, providing economic services to many agriculture sectors, including reducing the need for the use of pesticides. Bats are also good indicators of environmental health because their populations are sensitive to decreases in insect abundance as well as to changes in water quality and environmental management practices.

Regrettably, bat populations in North America are declining due to human influences such as pesticide use, habitat destruction, and introduced diseases. For example, white-nose syndrome, a condition caused by an introduced fungal pathogen (the spread of which may be linked to climate change), has caused catastrophic bat declines across much of North America and is expected to eventually affect bats in Alberta as well.

Bat houses (also called bat boxes) are conservation tools that are being used as part of an effort by some bat enthusiasts to prevent — and hopefully reverse — bat population declines. In addition to providing suitable maternity locations, bat houses are accessible structures that enable researchers to count the occupants and track population trends.

Of the nine species of bats found in Alberta, only two commonly use artificial roosting structures: little brown myotis (now listed as an endangered species) and big brown bats. These bats can roost alone or in groups that can number over a thousand individuals. Males typically roost alone, so bat houses occupied by large numbers of bats are usually exclusively adult females and their pups.

Ellis Bird Farm (EBF), a Nature Alberta affiliate located northeast of Red Deer, became actively involved in bat conservation in 1994 when it erected two large bat houses on site. The houses were built and donated by Zoltan Gulyas of Calgary. The boxes were mounted on the south sides of old buildings, one on a calving barn and one on an old grain elevator.

The Alberta Community Bat Program (ACBP) is dedicated to bat conservation, education, and research (albertabats.ca). Its mission is to raise awareness of bat conservation issues, provide information to help residents manage bats in their buildings, and to collect data needed to monitor and better understand bats in the province. EBF teamed up with ACBP to learn more about the bats on their site, track bat house use, document internal box conditions, and promote bat conservation by hosting an annual bat night at the farm.

Until 2016, monitoring of the EBF boxes was done on a sporadic basis, with the boxes being checked each season only to determine whether or not they were being used. A webcam placed in the grain elevator box in 2016 revealed that the box contained a surprisingly large number of bats. This prompted us to start conducting exit counts, using a click counter to record each bat as it left the roost for the evening to feed.

From 2016 to 2018, counts were conducted at least four times between April and October, with most checks undertaken during the breeding season (June–August). In 2019, under the mentorship of ACBP, a more detailed survey was conducted. Between April 20 and August 17, we recorded exit counts between sunset and one hour after sunset, noting the time when the first bat emerged and the time when the count concluded. Once the bats had all exited, a flashlight was used to facilitate counting of all remaining adults and pups. Temperature probes were also installed to record maximum and minimum internal roost temperatures and humidity levels. ACBP also installed a webcam near the grain elevator to capture footage of exiting bats.

Dry guano was collected beneath each box in July and August 2019 and submitted to ACBP, who then submitted samples to a genetics lab for DNA barcoding. The guano tests confirmed that the grain elevator box was used by little brown myotis while the calving barn box was occupied by big brown bats.

Interestingly, during two of the 2019 surveys, two great horned owls, one adult and one juvenile, landed on the roof adjacent to the roost. Although we had no visual confirmation of them preying on the bats, we presume that the owls, which have nested near the grain elevator for many years, did capture some bats as they exited the boxes.

From 2016 to 2019, the number of little brown myotis exiting from the grain elevator roost ranged from a low of 135 in 2016 to a high of 607 in 2019 (Figure 1). The 2019 peak represents the highest number of bats ever recorded in a box monitored by ACPB. Big brown bat occupancy of the calving barn roost was, by contrast, much lower and more sporadic (Figure 1). Counts ranged from a low of four in 2017 to a high of 62, in 2018. Box checks in September of 2018 and 2019 indicated there were still big brown bats in the roost, even though there was already snow on the ground.

A total of 14 exit counts of little brown myotis were conducted at the grain elevator box in 2019. The bats arrived at the box between April 20 and May 9, and the occupancy ranged from just one individual on both April 20 and 27, to a high of 607 on July 4 (Figure 2). A total of 16 exit counts of big brown bats were conducted at the calving barn box. The bats arrived at the box sometime between the May 9 and May 26 counts. Numbers remained relatively low and stable after June 4 (Figure 2).

It is not known why the little brown myotis population has increased in the grain elevator box. In part, it could be a result of ongoing efforts to maximize biodiversity at the site. While some herbicides are applied on EBF crops, no insecticides are used anywhere on the 640-acre (259-ha) farm. This being the case, we assume that the insect populations in the vicinity of both bat boxes are healthy.

The low and fluctuating numbers of big brown bats is not unusual, since this species tends to use several maternity locations each season, even switching roost sites if one becomes too crowded or does not meet their temperature requirements.

The peak exit count of 607 little brown myotis, on July 4, 2019, occurred during the period between when the pups are born and when they reach independence. The numbers decline as the pups begin to disperse and the bats start to depart for their overwintering locations.

Despite the summer of 2019 being generally wet and cold, there were some days of extreme heat. ACBP has suggested that internal box temperatures above 40°C can cause heat stress, especially during the nursery stage when both mothers and pups risk dehydration. Fortunately, the temperature inside the grain elevator box remained generally below this threshold, so the little brown myotis adults and pups would have been comfortable through the nursery period.

Ellis Bird Farm will continue to monitor the site’s bat boxes and work in cooperation with ACBP to conduct research, raise awareness, and promote bat conservation.

Acknowledgments:
We would like to thank Ellis Bird Farm for supporting this research and offer a special note of gratitude to Cory Olson of the Alberta Community Bat Program for his continued mentorship and support. 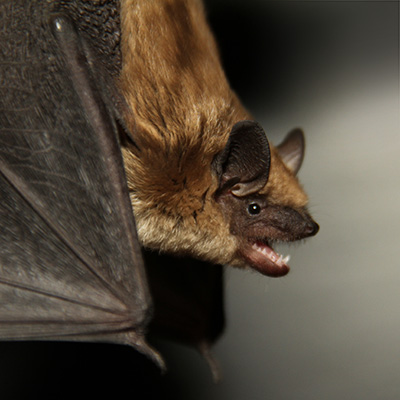 True to its name, the big brown bat is one of the larger types of bats in Alberta, typically weighing between 15–20 g. CORY OLSON