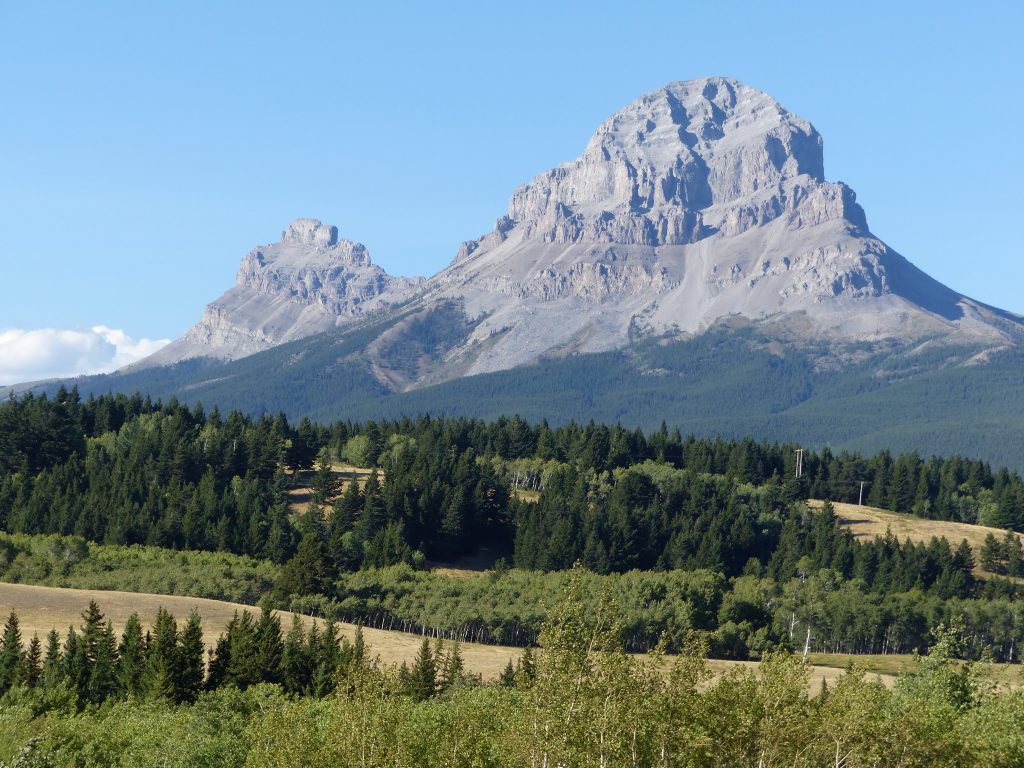 The distribution of plants and animals in Alberta is closely tied to the landscapes in which they live. Though there are some generalists, like coyotes, most species are adapted to specific landscape types. The development of these landscapes is in turn intimately related to Alberta’s geological history, together with ongoing geological processes. Here we will explore several important examples, including eroding mountain peaks, glaciated landscapes, deeply entrenched river valleys, and arid interior plains located in the rain shadow of the mountains.

The Rocky Mountains and Foothills did not always exist in the form they are now. What we see today is the result of nearly 60 million years of erosion whereby kilometres of sediment were eroded from the mountains. Mountaintop ridges are made of erosion-resistant Mississippian and Devonian dolomite, limestone, and quartzite. Intervening valleys have been cut by rivers flowing through more easily eroded Triassic to Cretaceous shales and sandstones. Erosion is still ongoing, with debris flows, landslides, rock falls, and talus accumulations creating alpine habitat.

Mountain goats have adapted to thrive on steep, rugged alpine terrain where they can safely feed on nearby mountain meadows yet easily escape from potential predators. RICK PRICE

A wide variety of animals are uniquely adapted to mountainous terrain. For example, mountain goats can survive literally hanging onto the edges of steep, rugged alpine slopes. Mountain goat adaptations include large, powerful forequarters to pull themselves up steep rocky precipices. In addition, their hooves have protruding soft pads to provide better traction on the rocks. These adaptations allow the goats to forage for vegetation on exposed windswept ledges and nearby alpine meadows, largely immune to predation.

To find and observe mountain goats in the Canadian Rockies, it’s best to first check out the local geology. Mountain goats require salt for nutrition, and they travel far during summer to get it. The Mount Kerkeslin Goat Lick in Jasper National Park is perhaps the best place in Canada to view mountain goats. The origin of the lick is tied to the geological history of this area. It is a deposit of light-coloured silt, called rock flour, that accumulated in a now-drained glacial lake. Minerals in the silts such as phosphorus, sodium, and sulphur were eroded by valley glaciers in the Athabasca River valley from limestone and dolomites in the surrounding mountains.

Even the debris from mountain erosion is important habitat for some species. For example, eroded talus and rock falls close to patches of mountain meadows represent prime habitat for pikas. Pikas depend on landslides, rockfalls, and scree deposits for protection from predators. All summer long, pikas gather, pile up, and dry out grass, twigs, and flowers to be stored as hay piles on the talus surface. These are later tucked under rocks for winter consumption. Talus and rock piles also provide protection from predators.

Every spring and fall, thousands of golden eagles make their way to and from their Arctic summer breeding grounds to winter in the United States and northern Mexico. Their migratory route takes full advantage of wind patterns created by the thrust sheets of the Rocky Mountain Front Ranges.

Individual thrust sheets are oriented such that the prevailing westerly and southwesterly winds rise up the slopes, creating updrafts above and in the lee of mountain ridges. During times of strong westerly winds, a standing wave develops, which provides lift for soaring golden eagles.

When the winds are not strong but the weather is warm, eagles soar on thermals over the peaks. Thermals are masses of warm air that rise convectively above the ridges. Eagles take advantage of the rising air masses to gain elevation with minimal energy expenditure. It is not uncommon to see several eagles circling around in a thermal, gaining elevation and then gliding gently downwards to the next thermal to begin another circular rise.

From the right vantage points, it is possible to see hundreds of golden eagles migrating in a single day. Peak spring golden eagle migration is mid-March to early April. In the fall, peak migration is from late September to late October. Classic eagle viewing sites are found along ridges of the eastern Rocky Mountain Front Ranges in Jasper National Park, Kananaskis Provincial Park, and the Crowsnest Pass.

The evolution and survival of the Banff Springs snail is all about a unique set of geological conditions. The snails thrive in the thermal springs of the Cave and Basin National Historic Site and surrounding area at the base of Sulphur Mountain in Banff National Park.

Sulphur Mountain was named for the sulphur-laden hot springs that flow from its base. The hot spring water is derived from snowmelt and rain falling at elevations above 2,200 metres on nearby Mount Rundle. Water circulates downward through permeable carbonate rock to a depth of 3.2 km, where it is heated geothermally. The hot water then returns to the surface by hydrostatic pressure. Some of the carbonate rocks the water percolates through are rich in gypsum, and this gives the springs their high calcium and sulphate content. Anaerobic bacteria convert dissolved sulphur into hydrogen sulphide, creating the springs’ characteristic rotten-egg smell.

This combination of temperature range and geochemistry at the thermal springs have created a unique habitat for the endangered Banff Springs snail to thrive. This half-centimetre-long snail lives nowhere else on Earth, thriving in the 30–36°C water temperatures and the dissolved minerals in the water.

During the last ice age, the ice was so thick that its enormous weight depressed the ground below. As the ice receded, the land rebounded upward, forcing rivers to cut deep to maintain their gradients. The resulting deep river valleys are today a prominent and important feature of Alberta’s plains, and several species have adaptations allowing them to thrive in these areas. 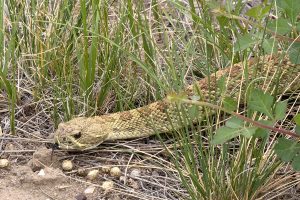 A good example is the prairie rattlesnake, found in southeastern Alberta mostly along the drainages of the deeply entrenched South Saskatchewan, Red Deer, Bow, Oldman, and Milk Rivers. Its preferred habitat is mixed-grass prairie associated with river and coulee bottoms, badlands, and sage flats. Wintering dens, called hibernacula, are usually in south and southeast-facing slopes offering wind protection. Hibernacula are typically found in slump blocks, meandering river scarps, badlands piping features, rocky outcrops, and mammal burrows. Temperatures in the hibernacula stay just above freezing. In the spring, females may find small burrows at the rims of entrenched valley escarpments for birthing of young, a setting that provides good sun-basking conditions and allows escape from predators.

Southern Alberta is situated in the rain shadow formed in the lee of the Rocky Mountains, a setting that has existed for tens of millions of years. Warm, dry winds descend eastwards onto the prairies, resulting in an arid to semi-arid climate. The great distance from large water bodies also gives the climate a continental influence, contributing to major seasonal temperature variation. As a result of these climatic influences, open grasslands began to appear about 30 million years ago. Fauna composition changed in response, with fewer browsers and more grazing and mixed grazing/browsing mammals.

Pronghorn antelope have adapted well on the semi-arid, rolling and flat glaciated landscape located in the rain shadow of the Rocky Mountains. TOM KOERNER

Pronghorn antelope thrive in rolling prairie grasslands. Much of their preferred terrain is glacial in origin, including proglacial lake sediments and moraines created under the ice sheet or as the ice melted. Antelope have adapted to living in open habitats, with relatively long legs that allow them to run at high speeds to evade predators. In fact, they are the fastest land animal in North America. Though they live on the open prairies, forbs and shrubs are their preferred forage rather than grasses.

Burrowing owl habitat is also located in the glacial-origin terrain of open prairie grasslands. The owls typically occupy the burrows of Richardson’s ground squirrels, avoiding rocky soil, hilly terrain, and lowlands that may flood. They require open areas with short and tall grasses containing mice, voles, and grasshoppers. Open landscapes also help them spot approaching predators. Unfortunately, there are only a few hundred pairs of burrowing owls left in Alberta. The remaining birds can be found in southern Alberta near Hanna, Brooks, and Suffield in areas of flat to undulating, lightly grazed pasture. Burrows must be present.

Burrowing owls live in someone else’s burrow on the treeless glaciated terrain of the southern prairies. The owls require wide open spaces containing their prey and to be able to watch for approaching predators. ASHLEY TUBBS

In conclusion, if you want to find and view Alberta’s diverse wildlife in spectacular landscapes, it helps to know a bit about the geology of where these animals live. From mountains, to the rain shadow of the prairies, to deeply entrenched rivers, geology and geomorphology have a strong impact on the distribution of much of the province’s biodiversity. 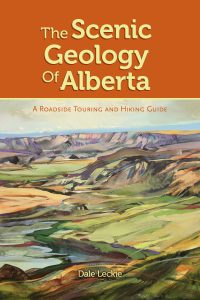 Dale Leckie, PhD, P.Geol., has written two best-selling books on the geology and landscapes of Alberta. The Scenic Geology of Alberta: A Roadside Touring and Hiking Guide (2021) encourages people to get out and explore the natural beauty of the province.