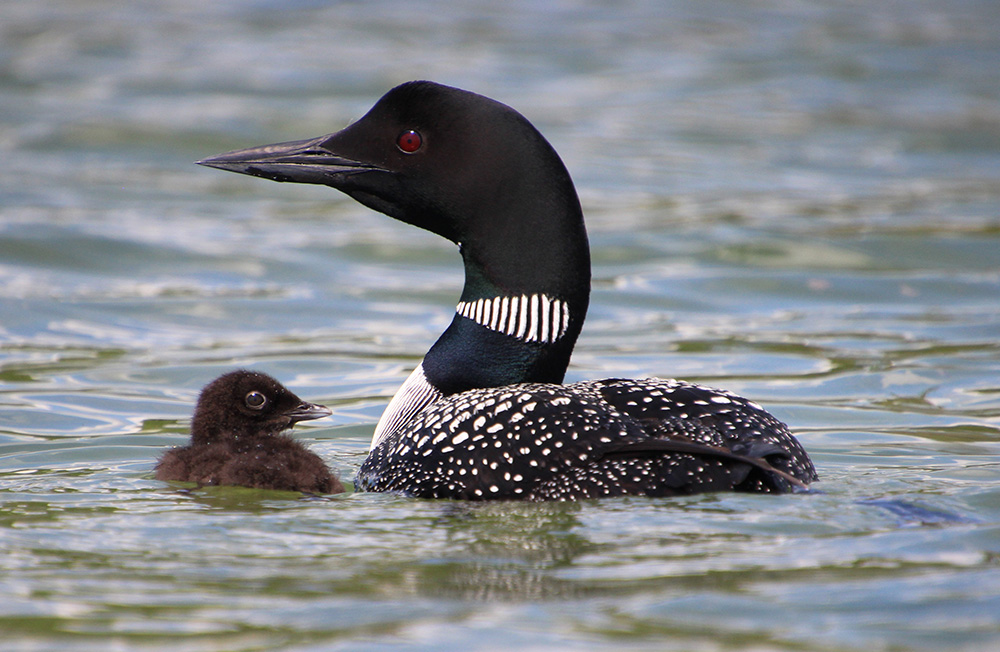 Like most people, I’ve always been excited to spot a loon or to hear its call when I’ve been near a lake. But it wasn’t until I started working with loons as a biologist that I realized how fascinating and important these birds truly are.

I started studying loons in 2019, when I began work as a postdoctoral researcher with Birds Canada and Acadia University. I had two jobs. The first was to analyze almost 40 years of loon monitoring data from over 1,500 lakes, and the second was to spend a summer canoeing around northern Ontario to look for loons. You can imagine which job excited me the most.

My summer looking for loons was one I will never forget. I spent the better part of three months driving over rugged logging roads, bushwhacking through the forest, and paddling across countless waterbodies to study 69 lakes near Sudbury, Ontario. My goal was to figure out which lakes had loons and to count how many of those loons had chicks. Specifically, I wanted to determine the number of six-week-old young per loon pair—a measurement loon researchers refer to as “productivity.” Most predation losses occur within the first six weeks of life, so the number of six-week-old young per pair is a good indicator of the number of loon chicks that will survive to become adults.

Measuring loon productivity is also an excellent indicator of lake health. As top predators, loons are sensitive to damage at lower levels of the food chain. For example, processes that decrease the number of fish in a lake can cause food shortages, especially for young loons. Being a top predator also makes loons more vulnerable to pollutants, like acid rain and mercury.

Acid rain occurs when sulphur dioxide and nitrogen oxides are released into the atmosphere by vehicles, power plants burning fossil fuels, and industrial processes like metal smelting, manufacturing, and oil refining. Once in the atmosphere, these chemicals transform and make rainwater acidic, which lowers the pH of lakes over time. In highly acidic lakes (pH less than 6), fish growth and survival can become reduced, leading to lower productivity in fish predators like loons.

An additional consequence of acid rain is that it speeds the transformation of elemental mercury into its organic and more toxic form, methylmercury. As a result, the mercury naturally present in the environment can become damaging. Additional mercury enters the environment through the burning of fossil fuels (especially coal), certain industrial processes, and waste incineration. Mercury from such sources is stable in the air and can travel far from the initial point of release.

Because mercury is not broken down when ingested, it becomes increasingly concentrated at higher levels of the food chain. The implication is that top predators, like loons, can ingest high concentrations of mercury as they eat contaminated fish. Adult loons with high mercury in their bodies spend less time caring for chicks, and chicks with high mercury in their bodies are worse at fighting off infections and avoiding predators. As a result, there are fewer six-week-old young per pair on lakes with higher mercury levels.

In theory, the lakes I visited for my field work should have provided excellent habitat for loons. They were all remote lakes with very little human disturbance, and to my eye, the lakes looked clean and unpolluted. But of the 69 lakes I visited, only four had loon chicks. On average, there were just 0.09 six-week-old young per loon pair on these lakes. That is just 20% of what previous studies have suggested is required to maintain a stable number of adult loons. These results suggest that the loon populations on these lakes are in trouble.

Unfortunately, similar declines are also being observed in other locations. Data from the Canadian Lakes Loon Survey, a citizen science monitoring program managed by Birds Canada, indicate that loon productivity in Canada has dropped from over 0.8 six-week-old young per pair per year in 1981 to under 0.6 in 2018. Other studies have shown similar declines elsewhere.1 Therefore, even though loon populations are currently considered stable in Canada, if this trend continues, we could start to see fewer and fewer common loons every summer.

Determining the specific causes of the observed decline in loon productivity is no easy task because there are numerous interacting threats to untangle. Besides acid rain and mercury pollution, there is also shoreline development and boating activity to consider. And there are natural challenges as well, such as depredation of loon eggs and chicks by other animals and harassment from biting black flies. Sorting this all out was the goal of my desk job.

Working with a team of colleagues, I analyzed 38 years of Canadian Lakes Loon Survey data from 1,577 Ontario lakes. I focused on Ontario because this province had the longest dataset and included the largest number of lakes. In all, I examined the effects of 16 different factors on loon productivity, including lake acidity, fish mercury levels, fish abundance, lake size, lake location, spring temperatures, spring and winter precipitation, and the presence of loon predators and competitors. What I found was that lake acidity and mercury are key drivers of common loon productivity declines.2 Lakes with higher acidity (pH less than 6) had lower productivity and showed steeper declines in productivity over time. I also found that loons produced fewer chicks on lakes with higher fish mercury concentrations.

What about loons in Western Canada, far from the mining developments and dense human populations of Ontario? Unfortunately, acid rain is a problem here as well. In Alberta, sulfur dioxide and nitrogen oxides are emitted from urban centres and by oilsands projects, and both sources are projected to increase acid rain production across northeastern Alberta in coming years.3 Moreover, soils in northern Alberta have a low buffering capacity, so even small amounts of acid rain can cause lakes to become acidic.4 This combination of high acid rain production and soils with a low buffering capacity poses a big problem for loons, which breed in the northern half of the province.

Mercury also poses a significant threat to loons in Alberta. Many lakes in Alberta currently have mercury concentrations that exceed the province’s safe consumption limits.5 If eating fish is not safe for people, you can bet it is not safe for birds that eat nothing but fish. Mercury contamination is of particular concern in northeast Alberta because oilsands operations are a significant source of methylmercury emissions.6

Climate change may also intensify the problems that acid rain and mercury pose for loons in Alberta and elsewhere. A study from Ontario found an association between recent changes in climate, including warmer temperatures and higher precipitation, and increased fish mercury concentrations.7 Climate change is also predicted to cause more frequent and extreme water level fluctuations, and this can increase lake acidity and the amount of mercury in loons.8

What You Can Do To Help

There are many meaningful ways for you to support loon conservation, and thankfully, there is still time to avert serious population declines. By learning more about loons and the threats they face, you can help spread awareness of their plight and can get others interested in protecting this amazing species. Another way is to support Birds
Canada (birdscanada.org), the country’s leading science-based bird conservation organization.

You can also help by becoming a citizen scientist yourself and participating in the Canadian Lakes Loon Survey: birdscanada.org/loons. My research would not have been possible without the amazing efforts of thousands of survey participants. By taking part in the loon surveys, you can collect critical information to help conserve loon breeding pairs and their chicks.

Finally, for anyone who lives on a lake or who enjoys visiting a lake in the summer, there are a number of simple ways to have a positive impact. Slow down while boating, especially near the shoreline. This helps to minimize wakes and prevents washing out loon nests and separating small chicks from their parents. Allow native wetland plants to grow in wide strips along shorelines to provide shelter for small loon chicks and habitat for the fish that loons depend on. Use non-toxic, lead-free fishing tackle, which prevents loons from ingesting toxic lead jigs and sinkers. Anglers should also properly dispose of fishing lines to avoid loons becoming entangled and injured. By working together, we can ensure that this beloved species is around for years to come.

Kristin Bianchini is from St. Albert, Alberta. After completing her Ph.D. at the University of Saskatchewan, she moved to Ontario, where she is currently working as a postdoctoral researcher with Birds Canada and Acadia University.