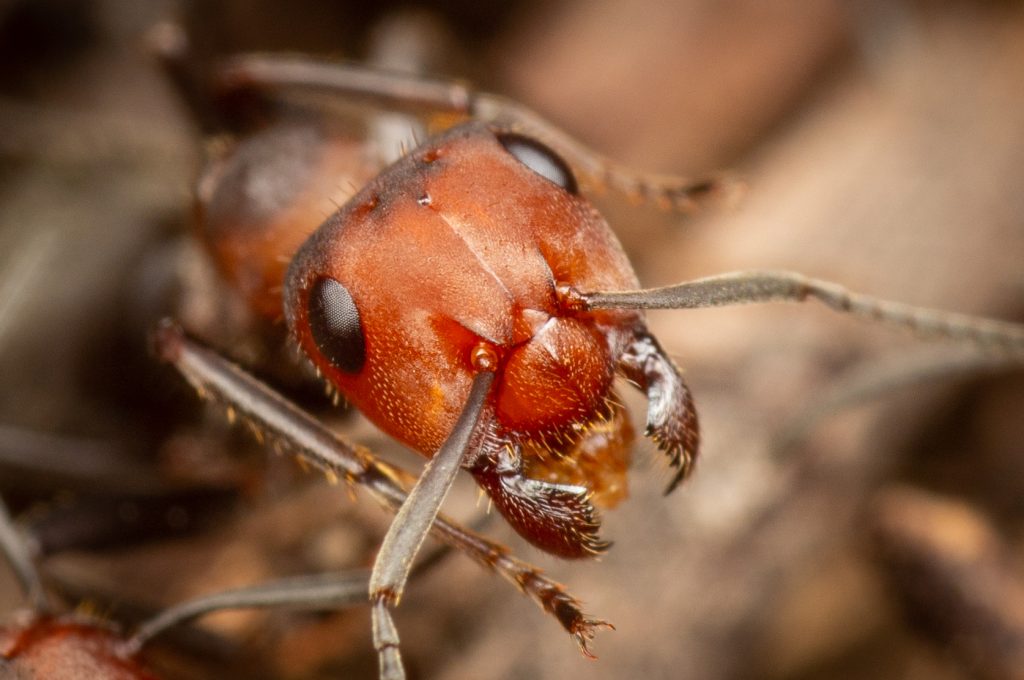 Ants are an integral and ever-present part of Alberta landscapes. Most people accept ants in their backyards, though some, like my neighbours, are at constant war with them, drowning them with the hose, pouring gas on them, or applying insecticides. Despite these efforts, I’m pretty sure their lawns have just as many ant mounds from one year to the next. Besides being resilient, ants are diverse, numerous, and ecologically important. A recent peer-reviewed study estimated that there are 20 quadrillion ants on our planet (that’s 20 with 15 zeros behind it).1 A number of such unimaginable magnitude emphasizes how impactful they are to our world. 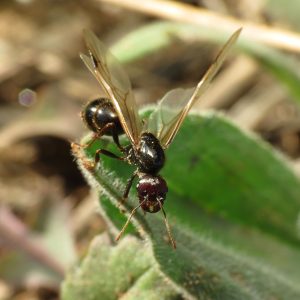 Any winged ants you see are part of the reproductive caste composed of queens and drones. Katja Schulz.

Before I delve into Albertan ants, there are a few general things everyone should know about ants. The study of ants is called myrmecology. Ants evolved about 100 million years ago (the age of the dinosaurs) and share a common ancestor with wasps and bees. Because of this evolutionary connection, all three groups are placed in the order Hymenoptera; each is in its own family, ants being in the family Formicidae. Scientists estimate there are currently about 25,000 species of ants worldwide, most of which are found in the tropics.

Ants are eusocial insects, living in colonies that have nonreproductive and reproductive castes. Most of the ants you will encounter are wingless workers. These are all sisters and all are sterile. Winged ants are the reproductive caste. Queen ants remove their wings after they mate, while male drones die after mating.

The story of ants in Alberta goes back at least 74 million years.2 Fossilized amber from Alberta has preserved several ant species, including the strange-looking hell ant (Haidoterminus cippus), which has elongated mandibles that moved up and down instead of side to side like most ants. The more modern-looking Chronomyrmex medicinehatensis looks like an ant you might see living today. Both ants lived in a tropical coastal environment very different from Alberta’s present climate. 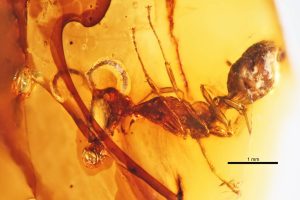 In modern Alberta, there are many remarkable ants, though only limited research has been done on them. Janet Sharplin laid the groundwork with her excellent 1966 report, The Annotated list of the Formicidae (Hymenoptera) of Central and Southern Alberta. This report documented 40 ant species from Alberta, including notes on nest shapes, natural history, and even reports of frogs hibernating in ant nests.

Sharplin’s work and ant collection, stored in the E.H. Strickland Museum at the University of Alberta, provided an excellent starting point for my own research, beginning in 2008. By collecting additional ants from across Alberta, exploring museum collections, and reviewing newly published literature, I was able to publish a key to the ant species of Alberta in 2013.3 In this report, my co-authors and I added 54 species to Sharplin’s list, bringing the number of known ant species in Alberta to 94. Fast-forward to 2022, and the list now sits at 117 species. This dramatic increase suggests there is much more we have to learn about ants in our province.

Given that there are only 117 ant species in Alberta (a far cry from the ant diversity of the tropics), why are they considered to be ecologically important? By comparison, there are thousands of species of beetles in Alberta. Even birds number over 300 species. The answer lies in ant abundance. Though there may not be many species, there are many individual ants. And they play several important ecological roles. 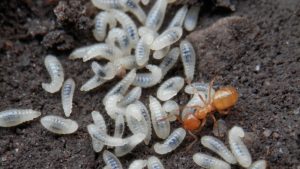 Ant larva are an important food source for many animals. Ryan Hodnett.

In Alberta, many vertebrates rely on ants for food. During July, some bears will eat ant larva almost exclusively and some birds, such as woodpeckers, feed on ants year round. Ants are also important for nutrient cycling, bringing nutrients into the ground and turning over soil by excavating their nests. Ants are also major predators of other insects, even pest insects such as spruce budworm. A single colony of ants can consume tens of thousands of insects a year.4 Lastly, ants create habitat for smaller organisms; their colonies provide protection, food, and a temperature-controlled home.

Organisms that require ants to survive are called myrmecophiles, and they include beetles, collembola, mites, spiders, leafhoppers, aphids, and butterfly larva. For example, the caterpillar of the endangered half-moon hairstreak butterfly (Satyrium semiluna) relies on ants for protection from predators and parasites, and in return it provides a sugary excrement for the ants to eat. In contrast, Ulke’s sap beetle (Amphotis ulkei) relies predominantly on ants for food. It tricks ants into feeding it by using its antennae to beg, as if it were another ant. The ant, believing it has met a hungry sister, regurgitates food for the beetle to eat. There are many other invertebrates that rely on ants for survival, making the presence of ants integral to invertebrate biodiversity. 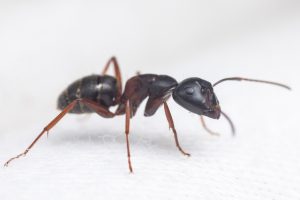 The Hercules carpenter ant (Camponotus herculeanus) is a common species that has large colonies under rotten bark and in rotten logs and stumps. Jason Headley

The study of ants is not for the faint of heart because some ants are notoriously difficult to identify. Separating species can come down to the number or shape of teeth on the mandible or how many setae (hairs) are on the head — using a microscope is sometimes the only way to get a positive identification. Of the 22 genera of ants in Alberta, Formica has the most species (45 recorded). At a glance, Formica take the form of a typical ant, but the range of variation is extraordinary. Individual species can be shiny or dull and coloured black, light amber, dark brown, or both red and black. They can range from large, 7 mm thatch ants to small, 2.5 mm field ants. Formica are one of most ecologically important ants because they can live in large colonies (up to 100,000 individuals), are major predators, and can be found provincewide.

Even though Formica ants are the most common, there is much we do not understand about their life history, habitat preferences, and potential conservation issues. The same holds for many ant species found in our province. More work is needed to better understand ants, their ecological impacts, and the impacts of land use, climate change, and invasive species in our province. We have a lot of work to do to understand how our changing world will impact these species.

Ants are awesome, and in Alberta they can be found almost everywhere. The next time you find an ant mound, in your lawn or elsewhere, I hope you will pause, take a closer look, and appreciate ants just a little bit more.

James Glasier did his undergrad studies at the University of Alberta and then travelled to Australia to complete his PhD at the University of New South Wales studying ants and insect ecology. He then returned to Canada and has focused his studies on biodiversity, conservation, and biological interactions. He currently works at the Wilder Institute – Calgary Zoo leading the Half-Moon Hairstreak Conservation Project.