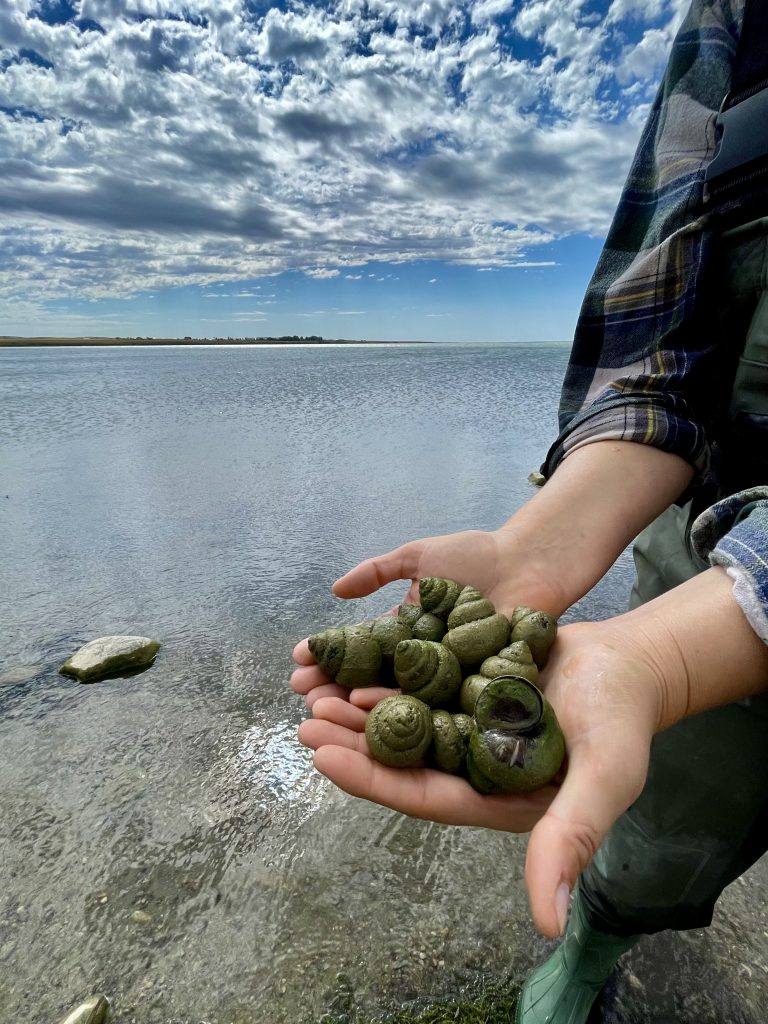 What the Shell… Chinese Mystery Snails in Alberta?

Since the Age of Exploration, the transfer of plants and animals across continents has been very common. For example, 25% of Canada’s vascular plants are introduced, non-native species. Many of these transfers were intentional, and others were by accident. Regardless of the reason, the unintended and unwanted consequences of such introductions are now, in hindsight, much better appreciated.

One of these non-native species is the Chinese mystery snail (Cipangopaludina chinensis), first introduced to North America in the 1890s through food markets in San Francisco. Since its introduction, the snail has become established in 34 U.S. states and has also been found in Eastern Canada and British Columbia. In 2019, it was officially sighted in McGregor Lake Reservoir, near the village of Milo in southern Alberta. Its method of spread remains unclear. It could be from deliberate “seeding” into lakes, release from the ornamental pet trade, unintentional spread by recreationists, or even birds carrying them.

Now, you might be thinking, what’s all the fuss about a snail? Well, in Alberta, they are classified as an aquatic invasive species. A species is considered invasive if it spreads readily upon entering an area outside of its native range and has adverse economic and ecological effects in the new area. Not all non-native species are invasive — some merely extend their range into a new region without causing adverse effects.

A feature of the Chinese mystery snail that enhances its ability to survive in new regions is its ability to tolerate being out of water for up to nine weeks. It does this by tightly sealing the opening of its shell with an operculum, or a “trapdoor,” effectively protecting it from drying out when water levels are low. This mechanism also helps it withstand unfavourable water conditions. You can imagine how this adaptation facilitates the snail’s spread — successfully evading chemical management or helping them survive transportation out of water by recreationists!

Another important attribute of the Chinese mystery snail is that, instead of laying eggs like many other snail species, it releases fully formed young, typically between May and October. When these juveniles emerge, they are larger than many of our native snail species, potentially outcompeting them for resources. Chinese mystery snails may also alter nitrogen-phosphorous ratios, increasing the likelihood of lake eutrophication (which leads to algal blooms and reduced lake oxygen levels) and food web changes. These snails also have the potential to block water pipes. Finally, their shells can wash up on beaches, making these areas less desirable for recreationists.

Given its recent arrival, we do not yet know the extent to which freshwater ecosystems in Alberta will be impacted by the Chinese mystery snail. I am currently conducting research at the University of Alberta that will hopefully shed some light on this question.

At present, resource managers are trying their best to manage the spread and population growth of the snail. Monitoring is essential since small organisms like this may otherwise not be noticed until the moment they are actually causing problems that are difficult to reverse. Think of the impact of the zebra mussel in the Great Lakes region!

Though the Chinese mystery snail may be a problematic species here in Canada, they are actually an essential bioindicator within their native range, representing healthy freshwater systems. In their native range, they help remove sewage contaminants and heavy metals, and are used to increase water clarity and restore natural wetlands.

If you see this species in Alberta, make sure to report it to the Alberta Invasive Species Council, abinvasives.ca, or on the Early Detection and Distribution Mapping System website, eddmaps.org.  Citizen reporting is beneficial for tracking and monitoring introduced species!

Megan Edgar is a current graduate student studying conservation biology in the Poesch Lab at the University of Alberta. Megan’s lifelong goals are to contribute to big-picture science, fight for climate justice and conservation, and appreciate all the critters on the planet (especially fish and birds; they’re just so cool!).