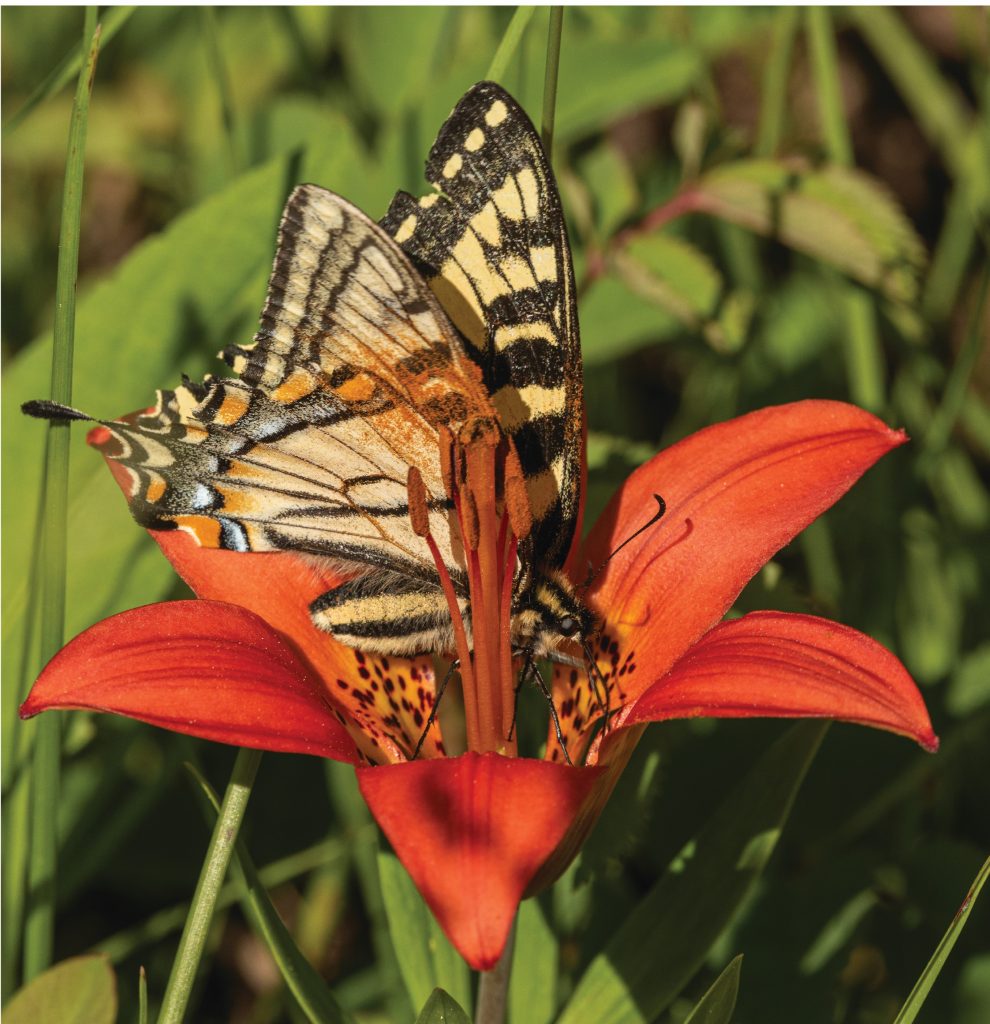 Wood lilies command attention. Their distinctive, large orange flowers flash like survey flags in a meadow. Wood lily flowers are such iconic prairie species that they are featured on the flags of the Province of Saskatchewan and the Métis Nation-Saskatchewan. However, the beauty of wood lily flowers is not intended merely for appreciation by humans (which, indeed, can be detrimental if we pick, rather than just admire). Instead, the flamboyance of wood lily flowers is a key feature of their rare and specialized system of insect-based pollination. The story involves a somewhat one-sided relationship, including plant sex, some specialized anatomy, a surprising role for wings, and success against long odds. 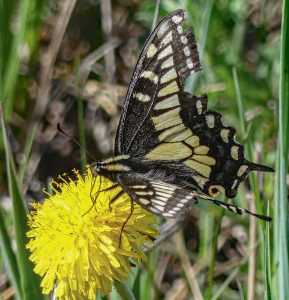 Butterflies visit the flowers of many Alberta plants for nectar. But compared to other insects, especially bees and flies, they are minor pollinators for most plant species. The wood lily is an important exception in that it depends completely on butterflies for pollination. And not any butterfly will do. The wood lily is pollinated effectively by only large butterflies, and across most of its Alberta range this includes just three species; the Canadian tiger swallowtail (Papilio canadensis), the old world swallowtail (P. machaon), and the anise swallowtail (P. zelicaon). Such extreme specialization requires that wood lily flowers encourage visits by the “right” insects but deter visits by unsuitable ones that use precious nectar and pollen without supporting successful pollination. Given that its large, cup-shaped flowers seem open to visits by any insect, how does the lily achieve this exclusivity? 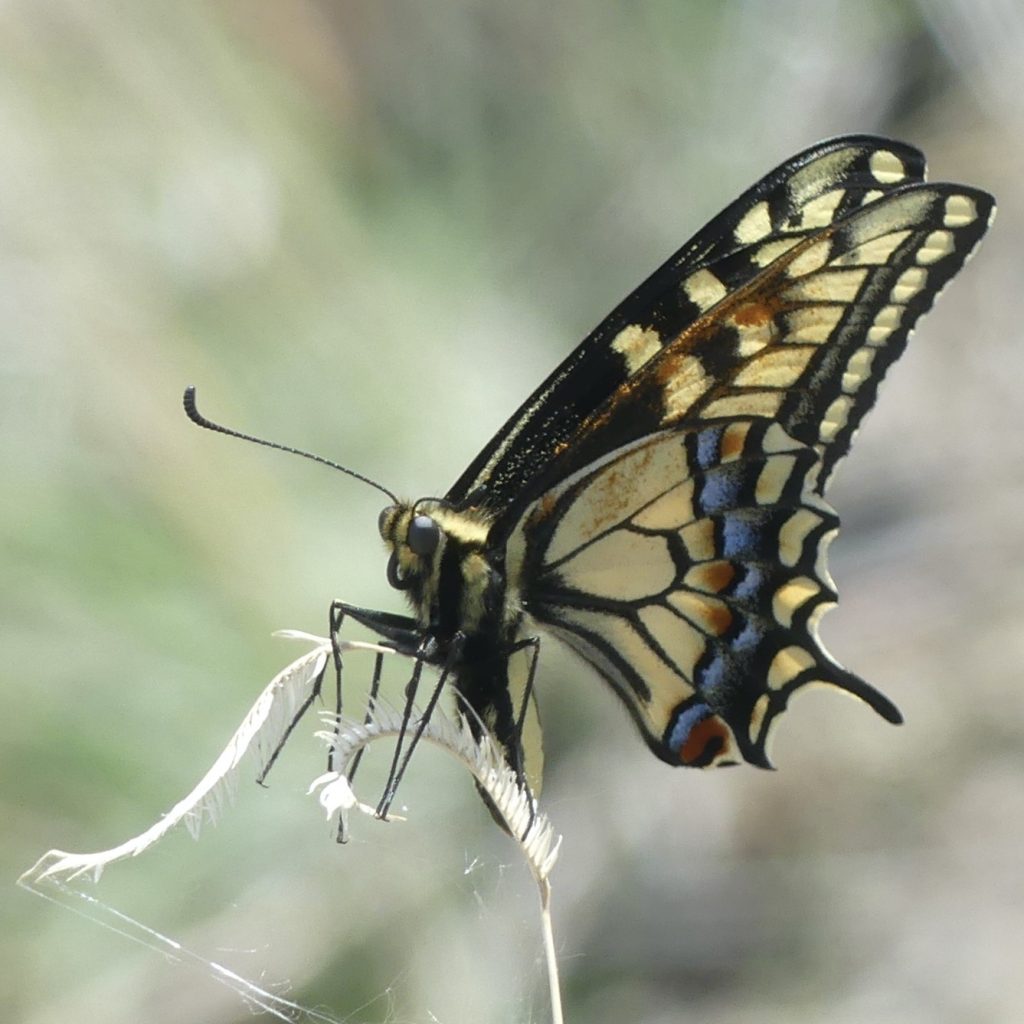 The old world swallowtail butterfly. Note the brick-red lily pollen along the front margins of the forewing. TIM SCHOWALTER

At least two wood lily characteristics favour swallowtail pollination while discouraging visits by other animals. The first is the striking orange colour of the flowers, which advertises their location to hummingbirds and most butterflies. These two groups have eyes that are sensitive to red, whereas the eyes of pollinating bees and hawk moths are not. Among the 21 North American lily species, 11 have orange flowers and are butterfly-pollinated, whereas the others have different coloured flowers and rely on different pollinators. Although the orange wood lily flowers attract visits by a variety of butterflies, only large species act as pollinators for reasons described below. 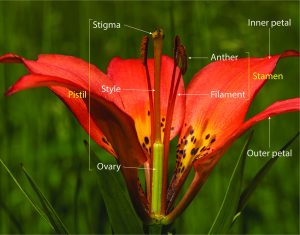 Closeup of a wood lily flower with relevant components labeled (one petal and two stamens are removed). LAWRENCE HARDER

A second wood lily characteristic controls which animals can access nectar from the flowers. Butterflies visit flowers for sugar-rich nectar to obtain the energy they need to mate and lay eggs. The accessibility of nectar depends on how deeply it is hidden within a flower and the length of a visitor’s proboscis. In a wood lily flower, nectar is produced at the base of three long (about 17 mm), narrow tubes, created by the outer “petals” where they attach to the stem. (Strictly speaking, as monocots lily flowers have “tepals” rather than “petals.”) These tubes are longer than the proboscises of all Alberta flies and bumble bees, and this limitation is likely also true for most Alberta butterflies. We are unaware of proboscis measurements for the Canadian tiger swallowtail, but the tongue of its closest relative, the eastern tiger swallowtail, is 18 mm long. Similarly, the old world swallowtail had the longest proboscis (17 mm) in a survey of 71 European butterfly species. Therefore, although many animals visit flowers for nectar in Alberta, swallowtails have almost exclusive access to wood lily nectar because of their long proboscises.

Pollination on the Wing

Not all animals that visit flowers are necessarily pollinators. Besides visiting a flower, a pollinator must also disperse pollen between different plants of the same species. More specifically, pollen needs to transfer from a plant’s (male) anthers onto the pollinator, remain on the pollinator as it moves between plants, and then transfer onto a receiving plant’s (female) stigma(s) (see the accompanying photo with labelled flower parts). Typically, only a fraction of the pollen carried on a pollinator is deposited on a recipient plant’s stigmas. The remaining pollen can be transported to the stigmas of additional recipient plants, as long as it remains on the pollinator. Because of such pollen “carryover,” animal-pollinated plants typically mate with multiple partners, and so are promiscuous. 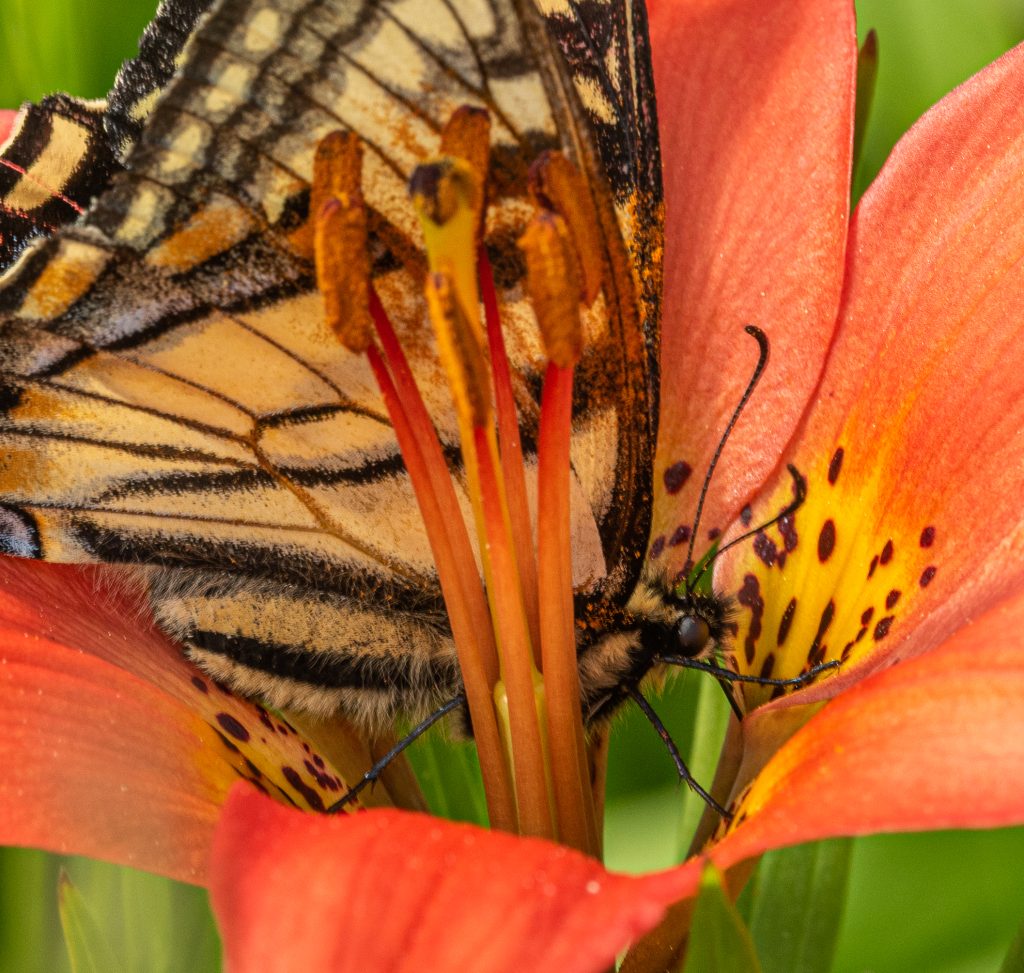 A Canadian tiger swallowtail probing a nectar tube with its proboscis. Note how pollen has rubbed off the anthers onto the forewing. LAWRENCE HARDER

Although the steps of pollen dispersal are easily stated, relatively few pollen grains complete them all. For most animal-pollinated plants, about 99% of the pollen removed from flowers does not reach stigmas of other plants and is lost from the pollination process. This is because animals do not act intentionally to help immobile plants mate with each other. Instead, animal pollination occurs incidentally as animals visit flowers out of self-interest, usually to find food. How then can plants increase the chance that their pollen will disperse successfully?

A Canadian tiger swallowtail circling within a wood lily flower to drink nectar from the three petal tubes. The butterfly just fits between the petal cup and the stamens and pistil. In the bottom photograph, note the butterfly’s tilted posture as it probes for nectar, which strokes the front margin of its forewing against the stigma and anthers. LAWRENCE HARDER

Pollination success depends, in part, on where pollen is carried on a pollinator’s body. The best sites are those where pollen has a relatively high chance of remaining on a pollinator and of contacting stigmas when the pollinator visits new flowers. Wood lily pollination is very unusual, even among species specialized for butterfly pollination, because pollen is transported on the pollinator’s wings, rather on its body or proboscis. The lower surfaces of swallowtail wings, especially along the front margins of the forewings, appear to be ideally suited for transporting wood lily pollen. This being the case, a lily flower’s anatomy is optimized to ensure that both donor anthers and recipient stigmas contact the same area on the wing. They do this by encouraging pollinators to adopt the same position during each flower visit — in effect, lily flowers provide a custom “fit” for swallowtails.

Other than being large, how does a cup-shaped wood lily flower fit a swallowtail? The answer becomes apparent when you observe a swallowtail visit a wood lily flower. On arrival, the butterfly usually lands on the horizontal surface of one petal facing the flower’s centre and raises its wings. To reach the nectar, the butterfly must turn sideways and descend into the flower’s cup, entering the narrow alley between the inside of the cup and the central stamens and pistil. Wood lily stamens and pistils are very long, so when a swallowtail is in the alley both the anthers and stigma are level with the butterfly’s inward-facing forewing. The alley is just wide enough to fit a swallowtail’s body, increasing the chance of wing contact with the stigma and anthers.

After drinking nectar from the first nectar tube, the butterfly usually walks around the circular alley to probe the other tubes, further improving the opportunity for pollen exchange. Each time a swallowtail pushes its proboscis into a nectar tube, its head and thorax tilt down, stroking the front margin of the forewing against the stigma and anthers. This provides an opportunity for cross-pollination, assuming the swallowtail carries pollen from another wood lily. Because the stigma is slightly higher than the anthers, it should receive donor pollen during a wing stroke before that pollen can be covered by the flower’s own pollen. This is important because self-pollen does not produce seeds in wood lilies.

What about smaller butterflies, such as fritillaries, which occasionally visit wood lily flowers? These butterflies seldom pollinate effectively because their wings are too short to contact anthers and stigmas if they enter the alley to drink nectar. Instead, such visitors act as nectar thieves, perhaps reducing the nectar available for swallowtails that visit later. 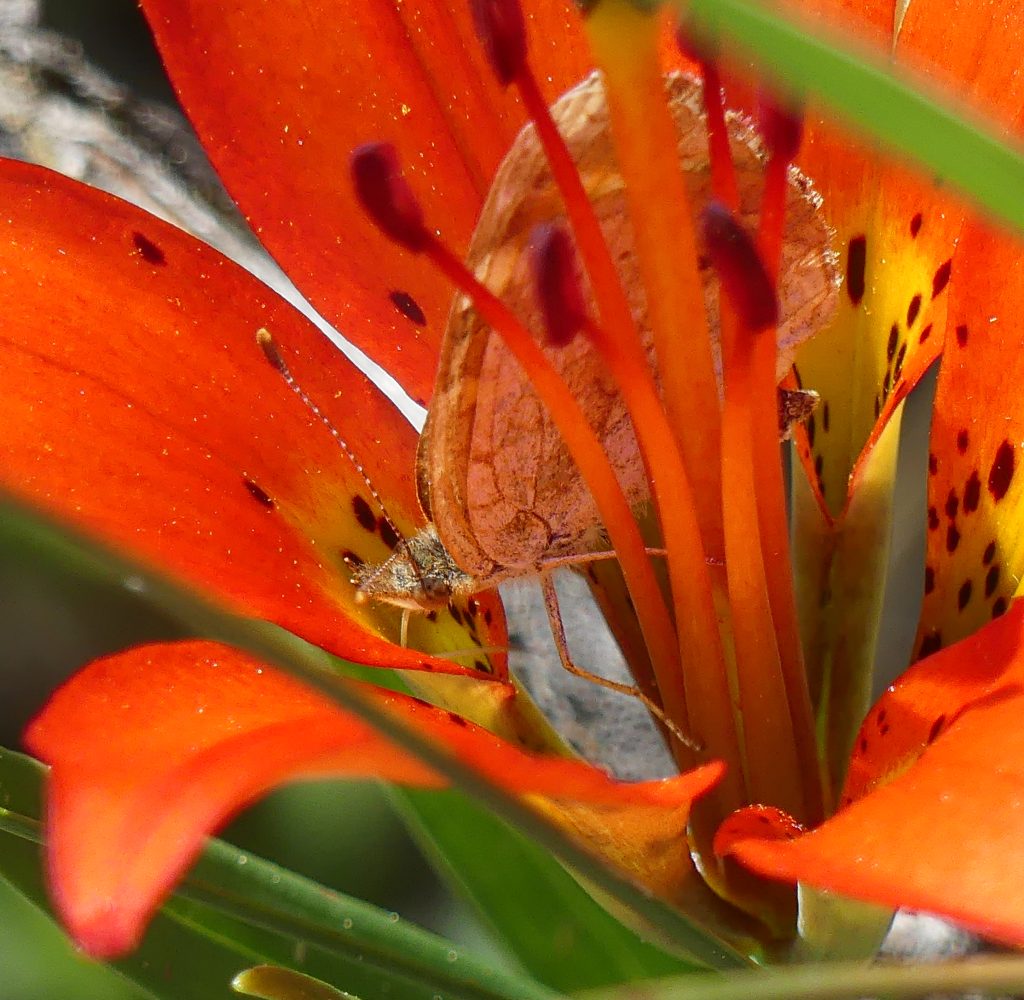 A northern crescent (Phyciodes cocyta) stealing wood lily nectar. This butterfly’s wings are too short to contact the stigma and anthers. TIM SCHOWALTER

In summary, wood lily flowers use nectar to entice swallowtails to visit while making the nectar difficult for other insects to access. Then they manipulate swallowtails to adopt positions that increase the chance of successful cross-pollination through several anatomical features: the size and shape of the petal cup, the length and position of the pistil and stamens, and the locations and depth of the nectar tubes.

Together, these features highlight the close association between wood lilies and swallowtails. The wood lily produces seeds only if it is cross-pollinated and that cross-pollination requires visits by large butterflies. Therefore, persistence of wood lily populations requires survival of both the plants themselves (no picking, please!) and of the butterflies on which their reproduction depends.

Lawrence Harder is a Faculty and Emeritus Professor of Biological Sciences at the University of Calgary. Although formally educated as a zoologist, Lawrence’s research across more than three decades has focused on the ecology and evolution of plant reproduction and pollinator behaviour.  Lawrence’s natural history and research fascination with flowers is motivated by the search for deeper beauty that is revealed by understanding their pollination function.

Tim Schowalter is a retired biologist and college instructor whose early work focused on bats and skunks in Alberta, and more recently on examining the distribution of small mammals through identification of prey remains in owl pellets. He has also worked on birds of prey on the Canadian prairies and Yukon and grasslands conservation in Alberta. In retirement, Tim’s interests have expanded to include butterflies and local history.