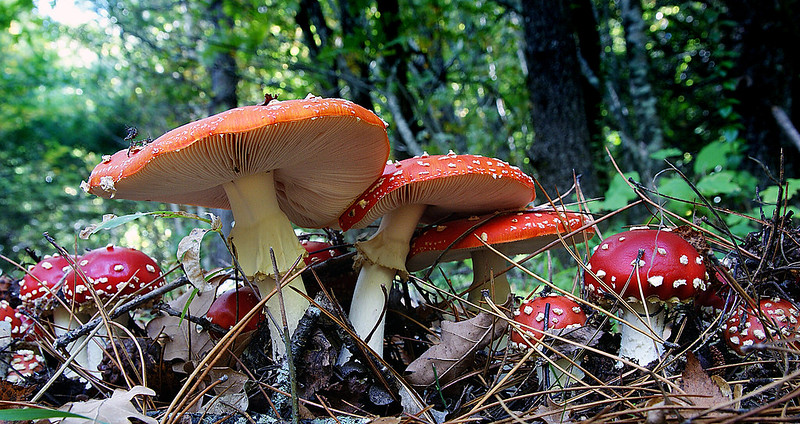 When you think about nature in Alberta, what organisms come to mind? Birds are likely top of the list for many people, along with other animals, particularly large, “charismatic” animals such as bears, elk, and moose. Trees, colourful wildflowers, fruit-bearing shrubs and other native plants would also be on most people’s lists. What would often be missed from the list, at least for most of the year, are fungi. Fungi are often overlooked because many of them spend much of their lives hidden from us, and out of sight means out of mind. While all fungi share certain features, these organisms display remarkable diversity. Here, we’ll focus on fungi that form mushrooms and other large, complex fruiting bodies.

Mushrooms often form a “fairy ring,” having developed in a specific region of a roughly circular mycelium. These rings certainly grab our attention when they grow in our lawns. M. SKIPPY

In late summer and fall, mushrooms and other fungal fruiting bodies are most noticeable, appearing seemingly from nowhere. This proliferation sparks people’s interest in and curiosity about fungi: why do mushrooms appear so suddenly, often in circles, and more often at certain times of year? In the past, supernatural forces were invoked to answer these questions; for example, “fairy rings” of mushrooms marked places where fairies or witches danced, and people believed it was dangerous to walk through these rings — you might get spirited away! While we no longer believe these myths, misconceptions and mysteries about fungi persist.

One common misconception is that a mushroom is the entire fungus. In reality, a mushroom is just one part of a larger organism. The relationship between mushrooms and a fungus is like that of apples and a tree; just as apples are the fruit of a tree, mushrooms are the fruiting bodies of a fungus. Both structures produce, protect, and help disperse offspring — seeds in the case of apples and spores for mushrooms. (Spores are usually a single cell and thus are smaller and simpler than seeds).

One reason why we might think that a mushroom is the whole fungus is that, unlike an apple tree that we can see grow and develop, the fungus is hidden from us, growing inside soil, trees, or some other substrate. We only become aware of this hidden fungus when its mushrooms pop out of the ground. Imagine if the apple tree grew underground in your yard and you only became aware of it when apples suddenly emerged from the soil! 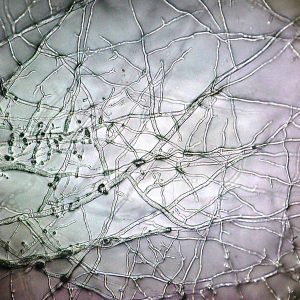 The body of most fungi is made up of fine, branching filaments known as hyphae. BOB BLAYLOCK

What does this hidden fungus look like? Most fungi grow as a highly organized network of fine tubes called hyphae. This network, known as a mycelium, forms when a spore lands on a suitable substrate. The spore breaks open as the first hyphae emerge, extending at their tips, like long fingers reaching through the substrate. The hyphal tips release digestive enzymes that break down the substrate into small molecules that the hyphae can absorb. These nutrients fuel further extension and branching of hyphae to form a dense, circular mycelium. Hyphae at the outer margins of this mycelium invade new areas of the substrate, searching for food, while hyphae further back in the mycelium branch extensively to feed on the food sources that have already been discovered. 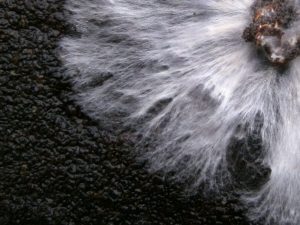 As the mycelium develops, its hyphae push their way into and through the substrate, even wood and other tough, resistant materials. How do these fine tubes exert enough pressure to do this? Each hypha is a long, tubular cell surrounded by a cell wall. The fungus produces sugars that draw water into the hyphae by osmosis. As this water flows into the hyphae, it “inflates” the tubular cell, just like when you pump air into the inner tube of a bike tire. The wall at the very tip of a hypha is softer and more elastic than the rest of the wall and so the water pressure gets exerted at the tip, pushing it into and through its substrate. In this way, the fungus can grow through soil, wood, and even rock walls.

As a fungus grows through its substrate, its mycelium does not blindly grow out in all directions. Just as animals and plants do, fungi sense and respond to environmental cues by changing their foraging behaviour. For example, hyphae within a mycelium sense each other’s presence and avoid growing too close to each other, reducing competition for resources. As well, when exploratory hyphae on one margin of a mycelium locate a nutrient-rich patch, the mycelium grows preferentially towards and into the new food source, cutting back on growth in less-rewarding patches. In effect, a mycelium is a “living, growing, opportunistic investigation”1 that makes and remembers decisions about growth.

Thanks to their invasive growth and opportunistic foraging, the mycelia of some fungi can grow for a very long time and become very large. The mycelium of a mushroom-forming fungus in the Malheur National Forest of Oregon is one of the largest organisms on Earth: it is currently about 10 km2 in size and about 2,400 years old.2

At some point, when a mycelium has accumulated enough resources and has the right combination of light, temperature, and moisture, sexual reproduction occurs, culminating in the production of fruiting bodies such as mushrooms. For many fungi, the mycelium formed by a single spore cannot produce mushrooms by itself but instead must encounter a mate, a compatible mycelium that is genetically similar but not identical. Mushroom-producing fungi are not “male” or “female”; instead, they can have hundreds or even thousands of mating types. When two mycelia of compatible mating types fuse, they form a new mycelium containing genetic material from both parents. In specific regions of this mycelium, under the right environmental conditions, hyphae respond to a signal directing them grow towards each other, intertwining to form small “knots,” the first stage of mushrooms.

As the young mushrooms mature and enlarge, they push up through their substrate, often overnight. Why do they appear so suddenly? Remember that each individual tube in a mycelium uses water pressure to extend at the tip. The tips of thousands of filaments that make up a mushroom can, in concert, exert a lot of pressure, allowing them burst through soil, wood or even asphalt. But attaining this pressure requires lots of moisture to inflate all the hyphae, and that is one reason why mushrooms form at times of year when there is abundant rain. The buttons have been developing on the underground mycelium and emerge suddenly and simultaneously when they are the right stage and there is sufficient moisture to support their emergence. Because the buttons have developed in a specific region of the roughly circular mycelium, the mushrooms (or other fruiting bodies) may be arranged in a ring. When fully mature, these fruiting bodies produce and disperse millions or even billions of spores. 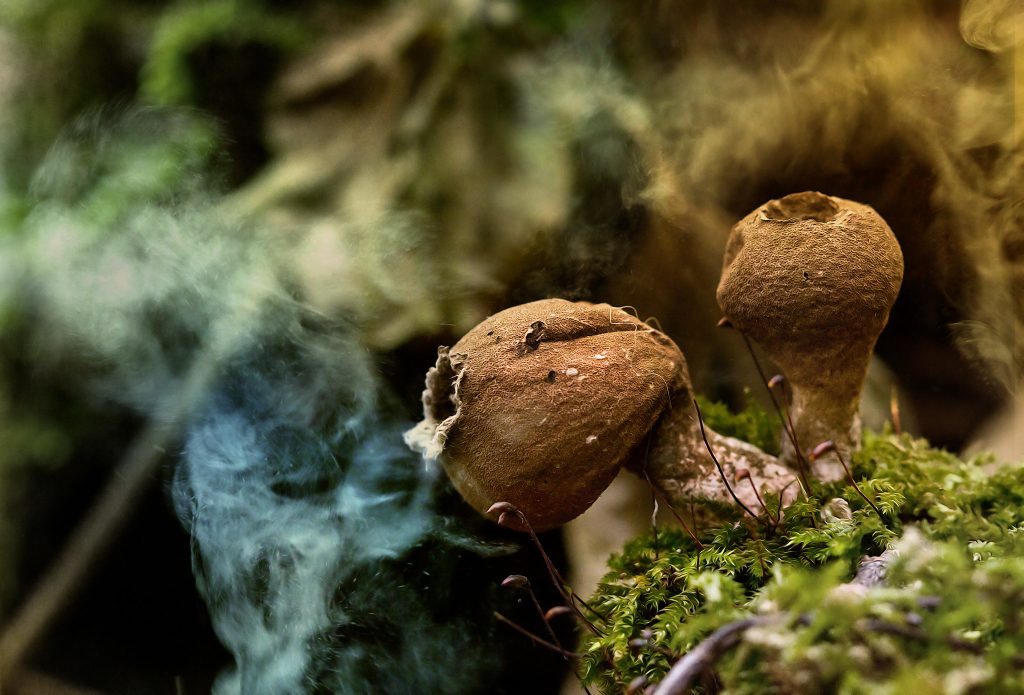 Mushrooms and other fruiting bodies, such as this puffball, produce and disperse millions or even billions of spores. CARLOS ANDRES REYES

Fueling the production of these large, complex fruiting bodies and their billions of spores, as well as growth of the mycelium itself, requires a lot of nutrients. What are these fungi feeding on? Like animals, fungi require organic molecules produced by other organisms. 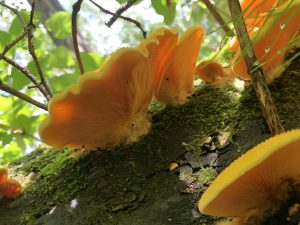 Fruiting bodies formed by a decomposer (saprotrophic) fungus feeding on a log. ERICA TO

Some fungi obtain these organic molecules by feeding on non-living sources such as wood or soil organic matter. These decomposer (saprotrophic) fungi play a crucial ecological role by releasing the nutrients locked up in organic matter and making them available to other organisms. Although these fungi can be destructive when they decide our houses, decks, and fences are their food supply, they can also be beneficial. We are learning how to use the digestive abilities and mycelial growth of these fungi to our advantage. For example, mycelia of decomposer fungi are now grown to produce building materials, shoes, leather, and clothing. And rather than adding to waste in landfills, these fungal products can be composted when worn out.

Other fungi are symbionts, obtaining organic molecules from living organisms. Some symbiotic fungi are pathogens that cause disease, but others, such as mycorrhizal fungi, are mutualists that provide some benefit to their partners in exchange for organic molecules. Most plants form some type of mycorrhizal association during their life, in which fungal hyphae grow around and/or into their roots as well as into the soil around the roots. Sugars made by the plant flow into the fungus, and in return the fungus delivers nitrogen and other soil nutrients. It is worth noting that this division of fungi into saprotrophs or symbionts is not always tidy: for example, some fungi change feeding strategy over their lives. 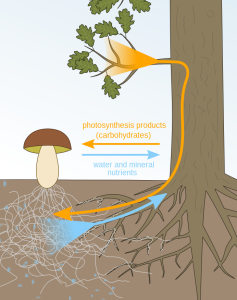 A mycorrhizal fungus grows into plant roots, providing the plant with nutrients that the mycelium obtains from the soil. In return, the plant provides the fungus with carbohydrates produced by photosynthesis. WIKIMEDIA COMMONS NEFRONUS

Both the plant and the fungus can have many partners. The hyphae that grow into the roots of one plant are typically part of an extensive mycelium that also grows into the roots of other plants. The resulting mycorrhizal networks interconnect plants of the same and different species, allowing nutrients and “information” (such as chemical signals that warn about insect pests) to move from one plant to another. For example, Suzanne Simard’s research at the University of British Columbia shows that in forests, these interconnected networks allow large, mature “mother trees” to provide sugars to developing seedlings or smaller shaded plants.3

It is important not to oversimplify these mycorrhizal networks by thinking of them as passive pipelines connecting plants. The fungi are opportunistic and make decisions about how to allocate resources to their own benefit. For example, in laboratory studies, mycorrhizal fungi preferentially reward “better” partners by providing more nutrients to plants that give them more organic molecules.4 We do not yet have a full picture of how these mycorrhizal networks work, with many fundamental questions still to answer. How large can a network get? How do the partners communicate with each other? And how do they regulate the flow of nutrients?

Even without knowing the full significance of these hidden mycorrhizal networks, knowing that they and the other fungal mycelia are there as we walk through a forest or grassland adds a fascinating dimension to a nature walk. Next time you are out for a walk, think about how, beneath your feet, mycelia are busy recycling nutrients, promoting new growth, and weaving individual plants together into interconnected networks. In the case of fungi, out of sight should not be out of mind!

Dr. Heather Addy was featured in our Nature Network Speaker Series. Click here to watch the recording of "Fungi in the Environment: from decomposition to the wood-wide web"