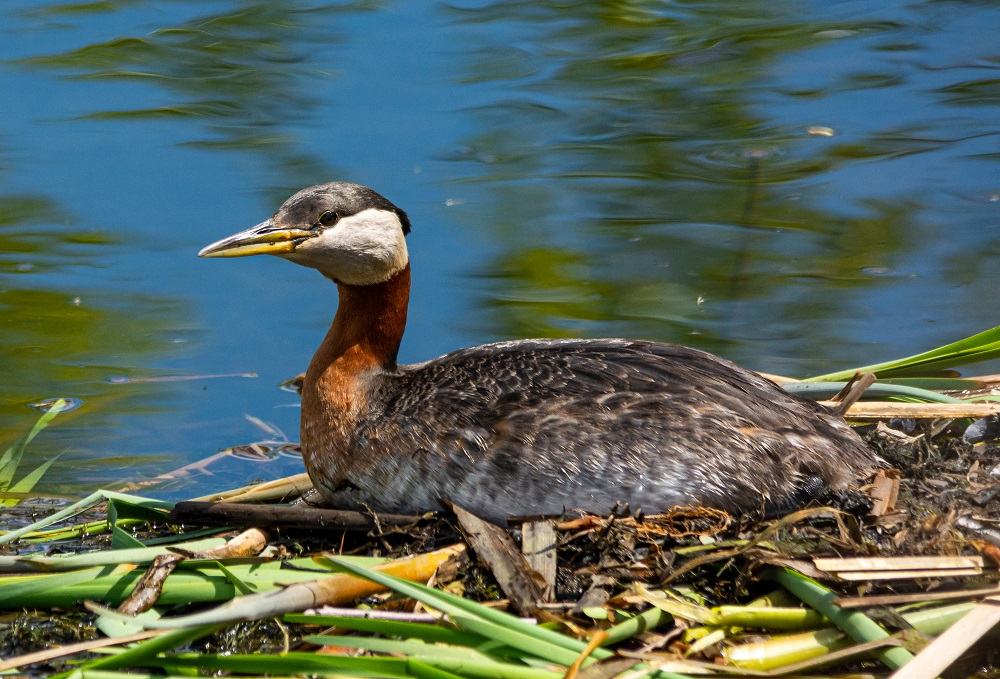 It’s an early May evening along a boreal forest lake. A campfire crackles at my feet and the setting sun glitters on the still, dark water. Suddenly, wild, braying calls in the distance pierce the cool evening air. It’s the call of duetting red-necked grebes, an announcement of warmer days ahead. The thought awakens the spirit and inspires me to go out and explore again.

Although the courtship of red-necked grebes is one of nature’s great shows, it often goes unappreciated. The same goes for other grebe species. These birds generally do not inspire the same sense of northern majesty that loons do. Nor are they synonymous with Alberta wetlands the way ducks and geese are. But grebes are just as much a part of our lakes and ponds as all those other birds, and the red-necked grebe is one of my favourites. It’s bigger and more outgoing than horned, eared, or pied-billed grebes, and easier to find than the larger western and Clark’s grebes. Just right for budding naturalists to watch and enjoy.

The red-necked grebe is a handsome bird. During the breeding season, when it’s most likely to be seen in Alberta, it has distinctive gray cheeks, a chestnut throat, and a black head cap. These colours, along with its dagger-shaped yellow bill, are handy field marks that make red-necked grebes easy to identify even at a distance. Nonbreeding birds lack the characteristic red neck. The chicks have a cute black-and-white colour pattern, like little zebras, which can still be seen in the faces of juveniles just acquiring their adult plumage. 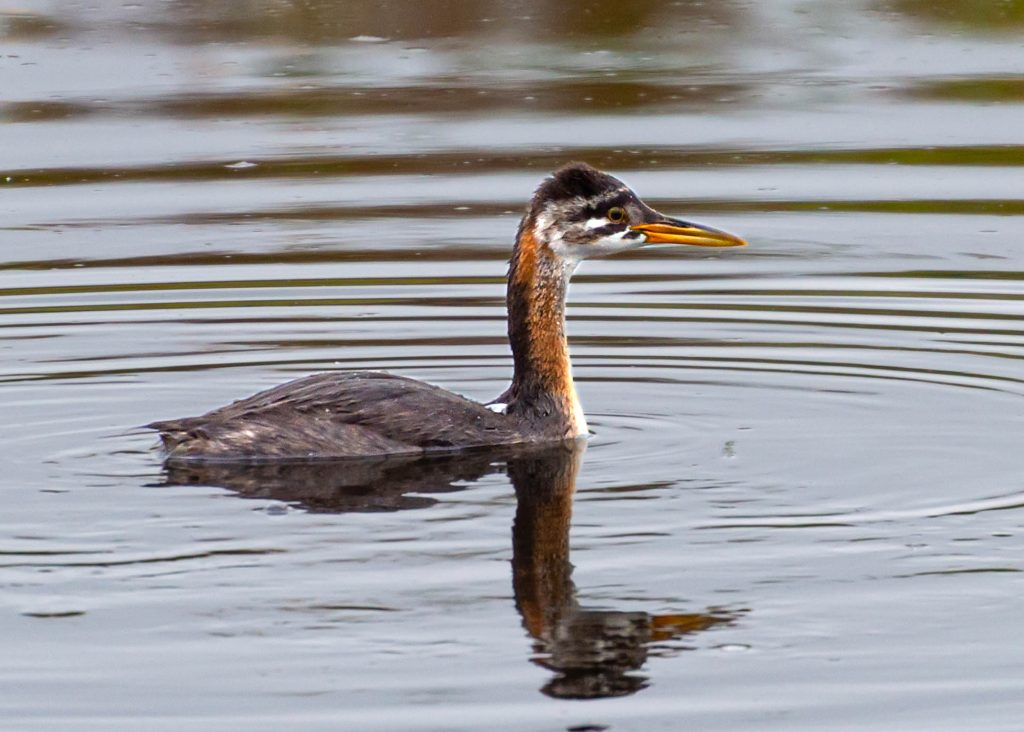 A juvenile red-necked grebe displaying markings that are transitional between chick and adult. NICK CARTER

Red-necked grebes winter mostly on the west coast of B.C. and Alaska. During migration they stop to rest on large, deep lakes before settling down on smaller water bodies across Western Canada to breed. They arrive in Alberta in late April, though how they do so is a mystery since I’ve never seen a flying grebe. They seem to simply emerge from wetlands once the ice is gone. Ducks and geese make little secret of their migration habits, but red-necked grebes stealthily fly overland at night.

Red-necked grebes are found across most of the province except the dry grassland region in Alberta’s southeast corner. During the breeding season, any decent-sized water body where fish can be caught may support a pair of grebes. I’ve frequently seen them on the glacially carved pothole lakes in and around Elk Island National Park, as well as Crystal Lake in the suburbs of Grande Prairie and even on Pyramid Lake in Jasper National Park.

The spear-shaped bills of red-necked grebes hint at their preferred source of food, which is mostly fish and freshwater crustaceans. They hunt visually by dipping their heads below the surface and scanning underwater for prey. While nesting, however, the grebes become less picky and will take just about any food source they can catch, including leeches, amphibians, and aquatic insects. Once a potential food item is spotted, the bird quickly dives below to make the catch. Red-necked grebes also have a strange habit of swallowing their own feathers, which clump up into ball-shaped masses in the gizzard (the avian equivalent of the stomach). This behaviour, which other grebes have as well, is still poorly understood by scientists. It might be a way of preventing sharp, indigestible objects like fish bones from damaging the gizzard.

Like all grebes, red-necked grebes are renowned swimmers and divers. I’ve spent many spring evenings watching grebes hunt and trying to guess where the bird will pop up again after it suddenly dips below the water’s surface. Most of our swimming birds like waterfowl, loons, and gulls have palmate feet, meaning the outer three toes are joined by webbing. Grebes evolved a different approach called the lobate condition, where each toe has separate, fleshy lobes used as paddles. Coots and phalaropes have this feature too, though it evolved independently in each. Lobed toes are great for swimming because the fleshy lobes passively spread out as the bird paddles and then compress during the foreword stroke, reducing drag.

When it comes to springtime courtship rituals, the red-necked grebe is theatrical. Mating pairs posture and vocalize to each other in a hoarse, braying cry. In some areas these grebes are quite territorial, but on big lakes with plentiful food they’re happy to share their space. This year, I counted no less than three nesting pairs in the vicinity of the Astotin Lake boardwalk at Elk Island National Park. The grebes’ nest is a mound of vegetation built near the water’s edge, with a depression in the middle where up to nine eggs are laid. After hatching, the small downy chicks hitch a ride on their parent’s backs for a couple of weeks until they can swim for themselves.

While red-necked grebe populations are secure in Alberta, and the birds are relatively human-tolerant, they’re still reliant on our wetlands for feeding, reproducing, and just about everything else they do. The best way to make sure they stay common here is to protect Alberta wetlands from disturbances and destruction. Red-necked grebes have been hollering it up every summer on Alberta lakes since long before we came on the scene, and if we keep our wetlands healthy, they’ll continue to do so.

Nick Carter is a writer, photographer, and naturalist from Edmonton. From birds and bugs to flowers and fossils, Nick is always seeking out the natural wonders of this province and sharing his enthusiasm with others.