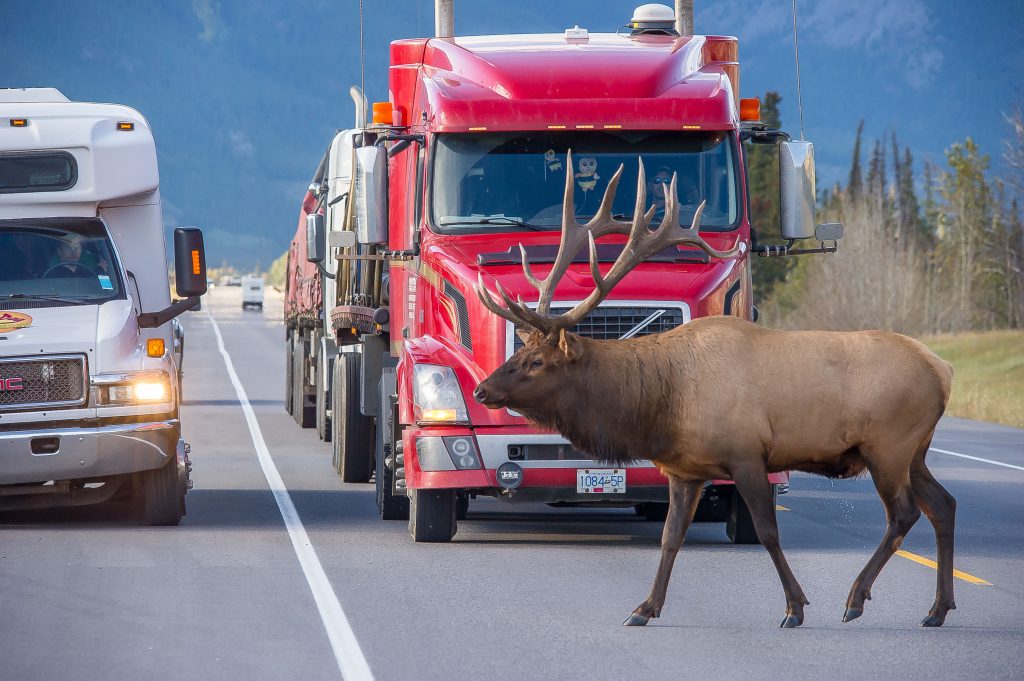 Walking along the muddy shore of Jasper Lake one fall afternoon, I was startled when a large wolf suddenly sprang up out of the bushes, practically at my feet. In an instant, the animal streaked across some open ground, splashed through a shallow arm of the Rocky River, and vanished into the woods on the other side.

It was readily apparent that there was something wrong with this animal. Its back was hunched and its body was low to the ground, as if one or both of its hind legs were broken. 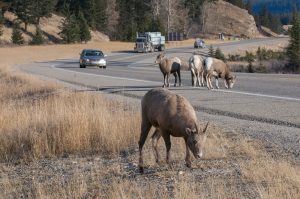 As long as there are some steep slopes nearby to escape from wolves, bands of bighorn sheep often graze on highway margins and lick salt or other chemicals from the pavement. Habituated to the passage of vehicles, sheep are slow to react to oncoming traffic. MARK BRADLEY

When I reported the incident at the Pocahontas park station, I was told that a few days earlier a passing tourist had stopped by to say that he had just hit a wolf running across the Yellowhead Highway. The warden had gone out to look for the wounded animal but had found no sign of it in the roadside woods. "This road is a killer," he said. "The traffic is getting busier all the time, especially transport trucks. On their way to the west coast, they don’t stop for the night. One day, a truck hit a herd of elk and killed six of them. The guy did not even report it to us." Over the years, he and other wardens had been called out many times to pull dead or wounded animals off the pavement.

Since 1980, Jasper National Park staff have kept track of wildlife casualties on the Yellowhead Highway. As of 2018, the roadkill of elk has risen to 1,140 and an additional 560 have died on the CN railway that transects the national park.1 The toll of bighorn sheep killed by vehicles and trains has climbed to 1,039. During the same period, 70 wolves have been hit on the roads and 31 on the rails. 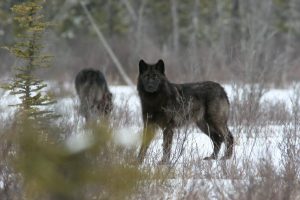 The number of road casualties among park wolves is surprisingly high. The dark colour phase is not unusual — 50–70% of wolves in Jasper have black fur. BRIAN GENEREUX

Besides tracking road mortalities, park staff also conduct roadside counts and aerial surveys of live animals to determine the status of their wildlife populations. Elk populations were estimated at about 1,000 in 1975 but have dropped to just over 300 today.1 Helicopter surveys over all sheep habitat in the park have reported a decline of about 60% compared to 1987. The size of Jasper’s wolf population is not exactly known.

The inescapable conclusion is that the Yellowhead Highway and the CN railway are a serious threat to the lower Athabasca valley — Jasper Park's most important montane habitat for wintering hoofed animals and their predators. Over time, the traffic corridor has become much busier, and the future looks even more so. Alberta Transportation data for vehicles passing the park's east gate have grown from an annual mean of 2,180 per day in 1980 to 4,900 in 2018. In an average year, 1.7 million vehicles drive through the lower Athabasca valley. Moreover, cars and transport trucks often exceed the posted 70–90-km/h speed limit.

To mitigate the wildlife collision rate, Jasper National Park might have to replicate Banff National Park’s solution, where the Trans-Canada Highway west of the townsite has been twinned and fenced. Today, there are six overpasses and 38 underpasses for the safe crossing of wildlife on the Trans-Canada over its 82-km distance to the British Columbia border. 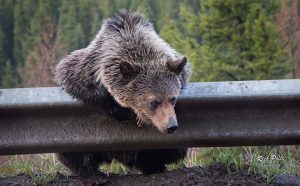 Roadside barriers designed for vehicles do not deter bears and other animals. RICK PRICE

"The decision to go for fencing," says Dr. Clifford White, retired manager of ecosystem research in Banff National Park, "was made after losses for several species of animals had exceeded 20% of their estimated population in the Bow River valley. For example, it was 20% for elk, 30% for moose, and over 30% for wolves and grizzly bears." How nature-minded tourists would react to the construction of highway fences in Jasper Park remains to be seen.

There is an additional historical explanation for the popularity of Jasper’s main roads. The Yellowhead pass was already a well-established travel route through the Rocky Mountains long before the national park was established in 1907. The first recorded use by Europeans was in the early 1800s, when David Thompson and other fur company men used this pass on their way to the west coast.

The traffic situation in Alberta's other national parks, such as Waterton and Elk Island, is much less problematic. The reason is simple: except for a local access road, there are no major highways transecting these landscapes.

For an overall review of Jasper's elk, sheep, and wolf populations since the park's establishment in 1907, email the author at ddekker1@telus.net

Dick Dekker is an independent field researcher of mammals and birds in Alberta. He has authored a long list of publications and ten books. Read John Acorn’s review of his latest book, Stories of Predation: 60 Years of Watching Wildlife on page 23.