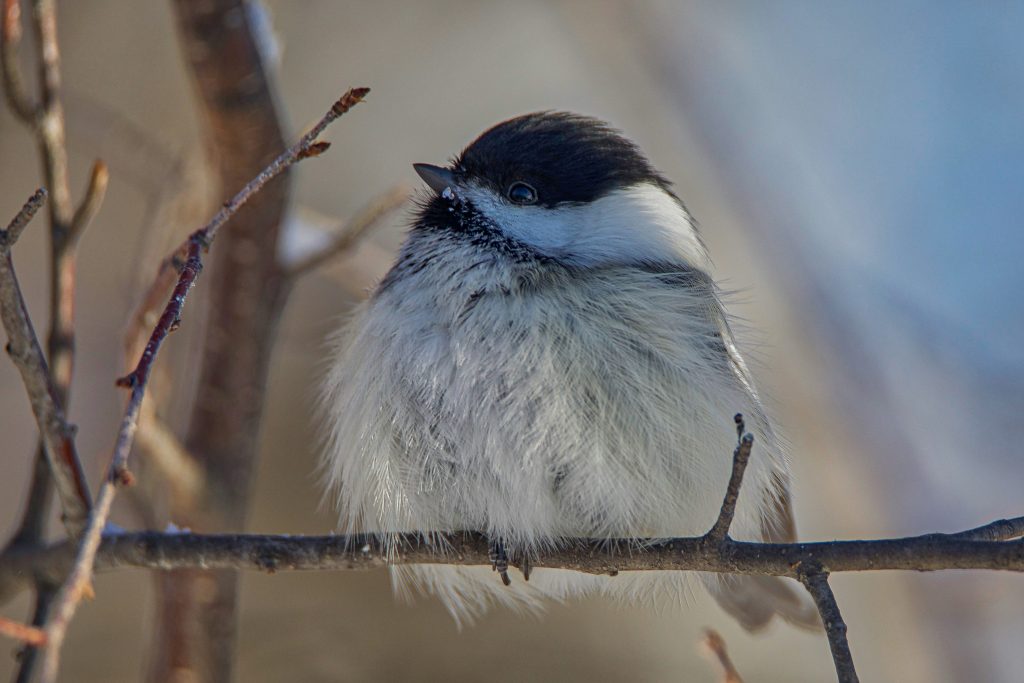 Alberta is home to four chickadee species. Black-capped chickadees are the most common and widespread. They are found across the entire province and are not only the easiest bird species to attract to backyard bird feeders, but also hold the distinction of being Canada’s most common feeder species. Their small size, cheery countenance, and remarkable hardiness endear them to their human neighbours. 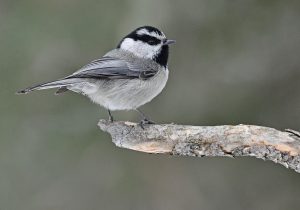 Black-capped chickadees visit winter feeding stations in loose groups consisting of about a dozen adults, each of which has left its smaller breeding territory in favour of a much larger (about 8 hectares) winter territory. Along with these adults are juveniles from other areas. Winter flocks rarely contain parents and offspring from the same family. Although a flock usually keeps to the confines of its territory, lively skirmishes will result if the group is caught intruding into the domain of another flock.

Chickadees prepare for winter by storing food in late fall. They deftly wedge seeds and other tidbits into bark fissures and various other hiding spots. Researchers have found that the size of a chickadee hippocampus, the part of their brain responsible for memory and spatial organization, expands in volume each fall, when most caching occurs. This would explain their astounding ability to keep track of thousands of hidden seeds through the winter. 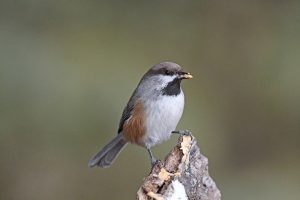 Long, cold winters can severely challenge the survival skills of chickadees and other resident birds, especially the smaller ones. To keep their tiny but highly revved gas tanks full, they must spend their waking hours in a ceaseless quest for food. Despite being readily attracted to supplemental food (sunflower seeds, peanuts, and suet are their favourites), they still spend a good part of each day searching out their own wild buffet, including frozen insects and spiders and other tidbits found on tree branches and trunks. During mild weather they will search widely, including high up in the treetops, but during windy conditions, they tend to concentrate their feeding activities low in shrubbery and other sheltered locations.

To survive cold winter nights, chickadees must eat as much as they can just before nightfall to provide the energy needed to sustain them until daylight. If the temperature is fairly mild, a flock will roost together in the dense foliage of evergreens. On colder nights, each chickadee sleeps alone in the snug confines of a pre-selected winter roost cavity and may even conserve energy by going into nightly hypothermia. During extreme cold, they will plunge under the snow to take advantage of the insulating snowpack. 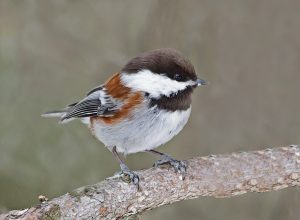 Chestnut-backed Chickadees have a dark brown, almost black cap and chestnut-brown back and sides - Myrna Pearman

When daytime temperatures remain frigid, chickadees will sit with their feathers fluffed up. This fluffing, caused by skin constriction, provides increased insulation by trapping air between the erect feathers. Their feet are fairly immune to the cold, thanks to a network of arteries that interweaves warm blood from their hearts with the veins carrying cold blood from their feet and legs. However, if daytime temperatures are extreme, they will hunker down on a branch so their fluffed feathers envelop their feet. They will also draw their feet up closer to their bodies for warmth.

I hope you take some time this winter to watch and truly appreciate our tough little wild neighbours — perhaps at your own backyard feeder.

Myrna Pearman is a retired biologist, nature writer, photographer and author of several books. Her books are available at www.myrnapearman.com. She can be reached at myrna@myrnapearman.com.