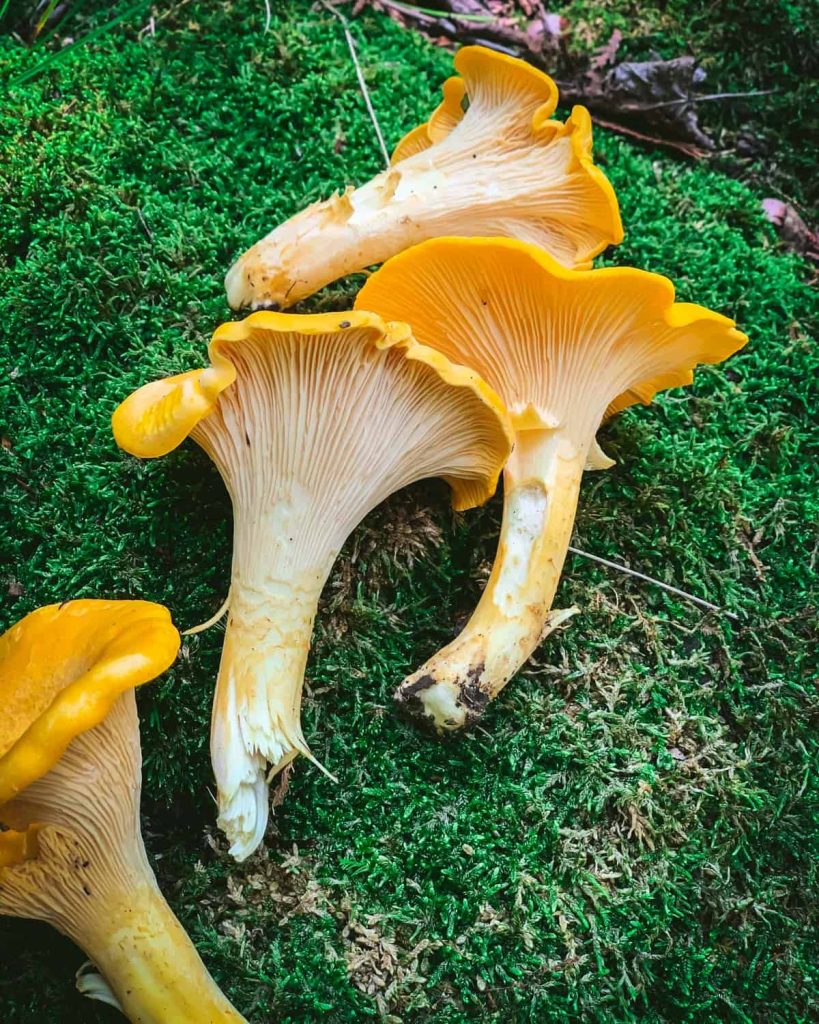 One of life’s simple pleasures is getting out in the natural world and just walking around. You can do this alone or with friends, no purpose is required, just a stroll in the fresh air. You don’t even have to go very far, just outside your front door will do. Urban, rural, or wild, the choice is yours. As you walk around enjoying the birdsong, the buzz of unseen insects, even the occasional sighting of wildlife, think about looking down.

There is a whole world right at your feet. A world beyond the patchy grass, concrete, and rubbish you might expect. The world of fungi. Not the neatly cropped, well packaged white or brown mushrooms they sell in the supermarkets, but weird and wonderful ones — colourful, oddly shaped, looking like little aliens waiting to surprise you (or maybe take over the world!). Some are delicious, others not really. Some are medicinal, others are not; some are even deadly. It’s amazing what you can find when you cast your gaze downward. 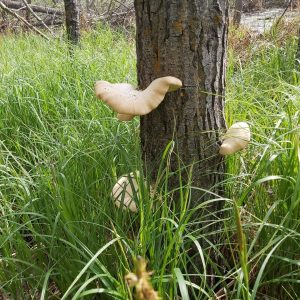 My introduction to the world of fungi and forays was when I attended a foray open day hosted by the Alberta Mycological Society (AMS). Specimens gathered from Elk Island National Park were labelled and neatly displayed for members of the public to view. I had no idea of the variety of mushrooms to be found. They were categorized by species as well as type: edible, toxic, poisonous. The selection was stunning and I couldn’t wait to learn more.

I joined AMS on their next “culinary” foray. This was held over a weekend at the Weald, a charming little provincial group camping spot with all amenities including barbecue pits. The main objective of this foray was to find as many edible mushrooms as possible. There were two forays a day and hundreds of mushrooms collected. The veterans were hunting for specific mushrooms and had their “secret” spots. Many productive sites are closely guarded secrets even among fellow hunters! The rest of us followed the experts and were treated to field identification techniques: sight, location, smell, even sound (yes, some mushrooms, such as Russulas, make a distinctive noise when broken). At the end of each foray, we returned to the campsite and set about confirming our identifications.

The daily highlight was coming together at the end of the day and cooking up our finds. That weekend I was introduced to chantarelles, lobster mushrooms, honey mushrooms, Suillus (a little slippery and bitter for me but prized for pickling), and many others.

Most people want to learn about edible fungi, how to identify them, and what to do with them. Proper identification is the most important aspect of looking for edibles. There are many fungi that look very similar and it is not until you get into the finer points of identification that the differences are apparent. It is best to focus on two or three species that you like and are certain about identifying. For example:

Fun(gi) Fact: Most folks are familiar with the four primary tastes: salty, sweet, bitter, sour. But there’s actually a fifth: umami. Mushrooms are the only food that possess this distinctive, almost meaty flavour.

Mushroom gatherers are very conscious of the environment. It’s not just about the best finds today, but also what will remain to find tomorrow. Consequently, there is a foraying etiquette which is respected and observed by all serious mushroom hunters.

Primary among these rules is to never pick more than you can use and always leave some behind. Remember that the mushrooms you collect are the final “fruiting body” of a more complex organism that is found everywhere. Only when conditions are right — light, temperature, moisture, food source — will the mushroom appear. The rest of the time the fungal network quietly grows and expands, unseen, underground, always looking for those ideal conditions to produce the ultimate prize.

Mushrooms can grow anywhere, but that does not mean that the hunter can go anywhere. Respect for sensitive ecosystems, as well as private property, is paramount.

One should also be aware that people aren’t alone in enjoying mushrooms. Deer, moose, squirrels, bears, birds, insects, and worms find mushrooms a tasty, nutrient-filled addition to their diet. So it’s a good idea to bring a whistle along on forays to alert nearby wildlife to your presence and avoid an unexpected encounter. Speaking of which, be wary of surprise passengers, as my colleague Erica To describes in the sidebar.

After one foray, a substantial display exhibit had been completed and almost immediately took on the unexpected function of squirrel buffet. Our unexpected guest jumped onto the table and carefully selected some of the finest specimens. It ran off, presumably to store its prize in its winter larder, and made multiple return trips. One can’t really begrudge the squirrel for its discerning palate.

If you are interested in learning more about the endlessly fascinating world of fungi, and would like to experience a foray, visit the AMS website at albertamushrooms.ca.

Liz Watts is President of Nature Alberta and a Board Member of the Alberta Mycological Society. She has a B.Sc. in Microbiology and works in clinical trials research as a Data Manager.

Posted in Plants and Fungi and tagged Alberta Mycological Society, Fungi Foray, Liz Watts
← Do You “Do Bugs”?Bear Tracks →