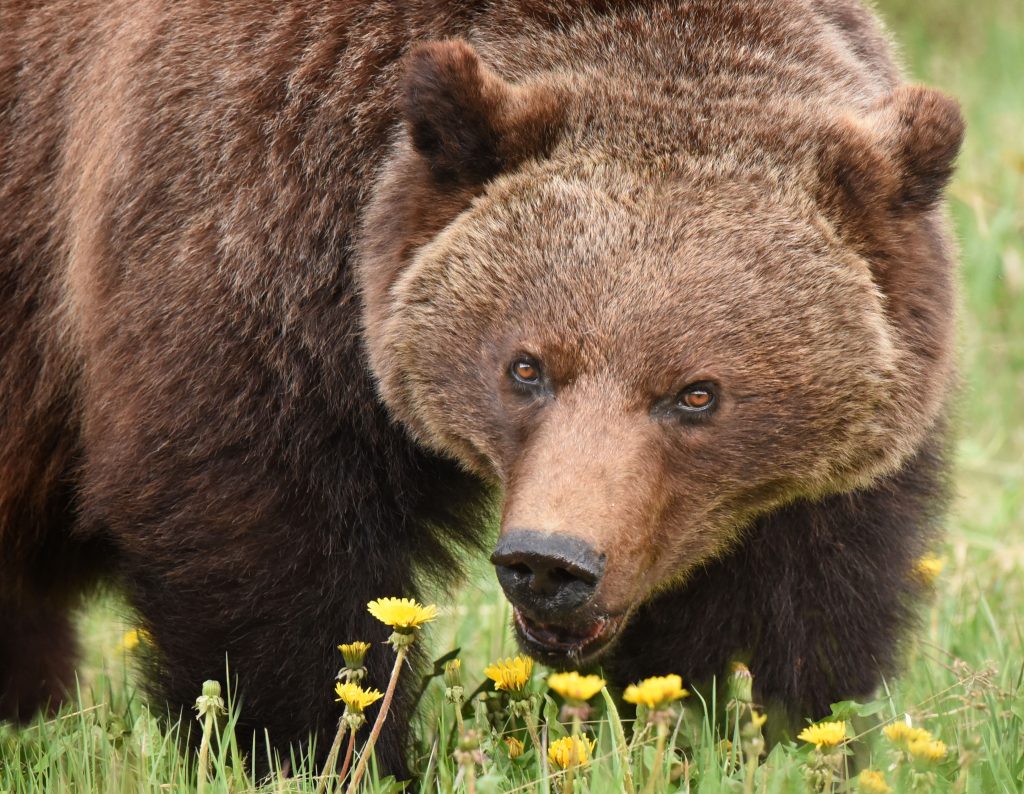 How Can We Protect Grizzly Bears from Trains in the Mountain Parks?

Ten years ago, Mike Gibeau, then the carnivore biologist for Banff National Park, identified a problem: collisions between grizzly bears and trains were increasingly prevalent. Between 2000 and 2010, ten grizzly bears there were struck and killed by trains and several more unconfirmed strikes were reported.1 That made train strikes the leading cause of mortality for this population, just as grizzly bears were designated as a threatened species in Alberta.

The rising rates of bear mortality motivated several individuals to search for a solution. Jim Pissot, an environmental activist in Canmore, engaged in relentless advocacy. Fred Green, then CEO of Canadian Pacific Railways (CP), addressed the problem with funding for research. Leanne Allison and Jeremy Mendes created an evocative, award-winning, interactive web documentary, Bear 71, about the life and train-caused death of a grizzly matriarch (bear71vr.nfb.ca). Journalists Colette Derworiz and Cathy Ellis painstakingly followed and reported on the lives and deaths of many other grizzly bears, transforming them from abstractions to individuals. These key people attracted other voices, leading to the creation of the Grizzly Bear Conservation Initiative, a research program supported by CP and Parks Canada. I led one of the research teams that tackled the problem with additional support from the Natural Science and Engineering Research Council. We had two objectives: to understand what causes bear-train collisions and to recommend ways to mitigate that problem.

The research team included graduate students, research associates, and collaborators and was supported by dozens of technicians, volunteers, and staff at CP and Parks Canada. Park biologists fitted GPS collars on 26 bears with exceptional care and success. Team members measured grain deposits (Aditya Gangadharan and Julia Put) and vegetation (Sonya Pollock and Alyssa Friesen) along the railway, combed through records of past mortality (Patrick Gilhooly), examined bear hair and scat (Jack Hopkins and Maureen Murray), studied the soundscape of the rail environment (Jonathan Backs), and integrated this information with the locations and movement trajectories of the GPS-collared bears and satellite-sourced environmental information.

We found diverse sources of bear-attracting food on or near the rail,2 including tonnes of grain spilled by hopper cars, several species of palatable plants (both native and introduced), enhanced productivity of buffalo berry (a local staple of bear diets), and train-killed ungulates. A few bears used the rail extensively as a travel corridor and some even dug up nearby caches of spilled grain collected by red squirrels. Decades of meticulous records by CP and Parks Canada showed that bears are not alone in their vulnerability; collisions with ten other species of large mammals added up to hundreds of individuals over the past quarter-century.3 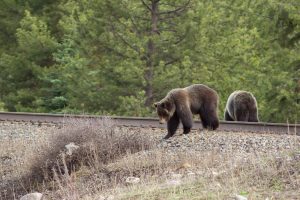 In addition to studying causes of attraction to the rail, we tried to understand the characteristics of locations where collisions occurred. At the beginning of the project, many people felt that vulnerability of bears to train strikes was caused mainly by attraction to grain spilled along the tracks. But research showed that neither locations with more spilled grain, nor even those used most often by collared bears, demonstrated higher instances of past bear mortality. Grain may have been a more significant factor before thousands of hopper cars were replaced or retrofitted to reduce spillage just before our study began. Our analysis of train-associated mortality involving 11 different mammal species, including grizzly bears, showed the best predictors of mortality sites were train speed, proximity to and amount of water, and track curvature.3 In short, it appears that bears and other animals are being struck mainly in locations where they fail to detect or avoid trains in time.

Other factors may also have contributed to the sudden appearance of grizzly-train collisions in 2000. A few years earlier, wolves recolonized the Bow Valley and elk increasingly sought refuge in the townsite of Banff. Subsequent management efforts to reduce the congregation of elk within the townsite coincided with an increase in elk strikes along the railway, which attracted scavenging carnivores like grizzly bears. Elk mortality on the railway peaked in 2000, the year grizzly began strikes began, but declined as the elk population declined to one-third of its size in the 1990s.

Results from our study and work by others have led to several forms of mitigation. Animals seem to be much more vulnerable when they are surprised by approaching trains and lack rapid escape routes. Therefore, Parks Canada and CP have worked collaboratively to reduce vegetation that obscures visual and acoustic cues near the rail, and to provide trails for rapid escape when a train is approaching. In addition, Jonathan Backs invented a rail-mounted warning system that works much like crossing signals for people.4 The signal causes animals to leave the rail several seconds earlier than when no signal is provided, potentially avoiding panicked responses that might result in a collision. These site-specific mitigations can be applied at locations that have high rates of past mortality, particularly ones with the characteristics of our predictive model.

Mitigation — including retrofitted and replaced hopper cars, widening of rights-of-way, and clearing of bear trails adjacent to the rail — seems to have been helpful at reducing train mortality for grizzly bears. In contrast to the 13 confirmed mortalities between 2000 and 2011, the year the initiative began, there was only one confirmed strike, which killed two cubs, between 2012 and 2019. At the time, I optimistically speculated that the bears had learned to adapt to the rapid changes that occurred in their environment at the turn of the last century.2 Alas, the run of reduced mortality did not last; three more grizzly bears died on the railway in Banff in 2020 and two more were struck in 2021 on the highways in Banff and Yoho, totalling four adult females and a yearling.

Ironically, it is the shy bears that seem to have more vulnerability to train collisions, perhaps because the rail provides a reliable respite from the throngs of people that occupy most of the productive parts of the Bow Valley. Telling the stories of a couple of these bears augments the statistics with the lived experiences of individuals. Bear 143 was one of our study bears. She ranged through large parts of Banff, Kootenay and Yoho before she was struck on the rail between Castle Junction and Lake Louise in September 2020. She was a young mother who had previously produced two sets of cubs and would undoubtedly have produced more, but for one unlucky shortcut along the rail.

Another of our shy study animals, Bear 130, died in late June 2021, the season when many other grizzly bear strikes have occurred. Her death was especially unfortunate because she had narrowly escaped this fate previously. Although Bear 130 spent most of her life in remote parts of the Cascade Valley, she had two previous mishaps with the rail. Late on a fall night in 2012, she lost two cubs to collisions after foraging on a train-killed moose carcass. Park staff were there to collect one yearling carcass, so as to prevent further mortalities related to scavenging. One officer described to me how wolves were howling nearby that night, as if in commiseration after a wolf pup was struck a week earlier at the same location. Bear 130 remained in the area for three days, despite evidence that the second yearling had also died, and left only when a large male grizzly bear arrived.

It got worse for Bear 130. In 2016, CP staff reported a presumed strike on two more of her cubs in almost the same location near Muleshoe. Parks biologists who reviewed the locomotive’s camera footage thought the chances of survival were slim, but no carcasses were found and the cubs turned up on remote cameras the following spring. I was among the elated followers of these bears and wondered whether Bear 130 had learned enough about trains to warn her cubs in time. How terrifying that must be, to witness a near collision. Unfortunately, her luck ran out when the strike near Vermillion Lakes in June 2021 killed both Bear 130 and one of her latest yearling cubs.

Why tell these grisly details? I think that knowing a bit about how these intelligent animals repeatedly navigate the perils of their human-altered environment, often with tremendous adaptation and terrible odds, emphasizes the individual tragedy and profound loss that occurs with every single one of these mortalities, however positive the statistical trend. The loss of four reproductive female bears in the past two years — the engines of growth for this vulnerable population — shows just how tenuous the apparent gains between 2012 and 2019 were.

It’s been 10 years since the workshop that began the Grizzly Bear Conservation Initiative, which causes me to ponder how much has changed as a result of the efforts by those founding individuals who made the ensuing research possible. For the individual animals that were unlucky enough to be struck by a train (or other vehicle), nothing changed at all. But I like to think we’ve learned things that could be applied to mitigation efforts like those described above. This applies not only to Alberta’s threatened population of grizzly bears, but potentially to wildlife around the world, where train-caused mortality occurs without enough public interest and economic capacity to address it. I also hope we showed the importance of collaborative effort by individuals from different agencies and with different kinds of expertise. Over this same period, human visits to Banff have increased by 25% to over four million annually5 and COVID has dramatically increased park use around the world. Wildlife will need all the innovation and assistance we can provide to persist in an increasingly human-dominated world.

1 Bertch, B. and M. Gibeau. 2010. Grizzly bear monitoring in and around the Mountain National Parks: Mortalities and bear/human encounters 1980–2009. Parks Canada, 22.

Colleen Cassady St. Clair is a professor of biological sciences at the University of Alberta.  She and her students emphasize animal behaviour in their studies of wildlife management and conservation. A version of this article was published in the 2021 State of the Mountains Report by the Alpine Club of Canada. For further reading, ten scientific articles supporting the results described above are cited in References 2 and 3 and were led by Jonathan Backs, Aditya Gangadharan, Patrick Gilhooly, Jack Hopkins, Maureen Murray, Sonya Pollock, and Julia Put.