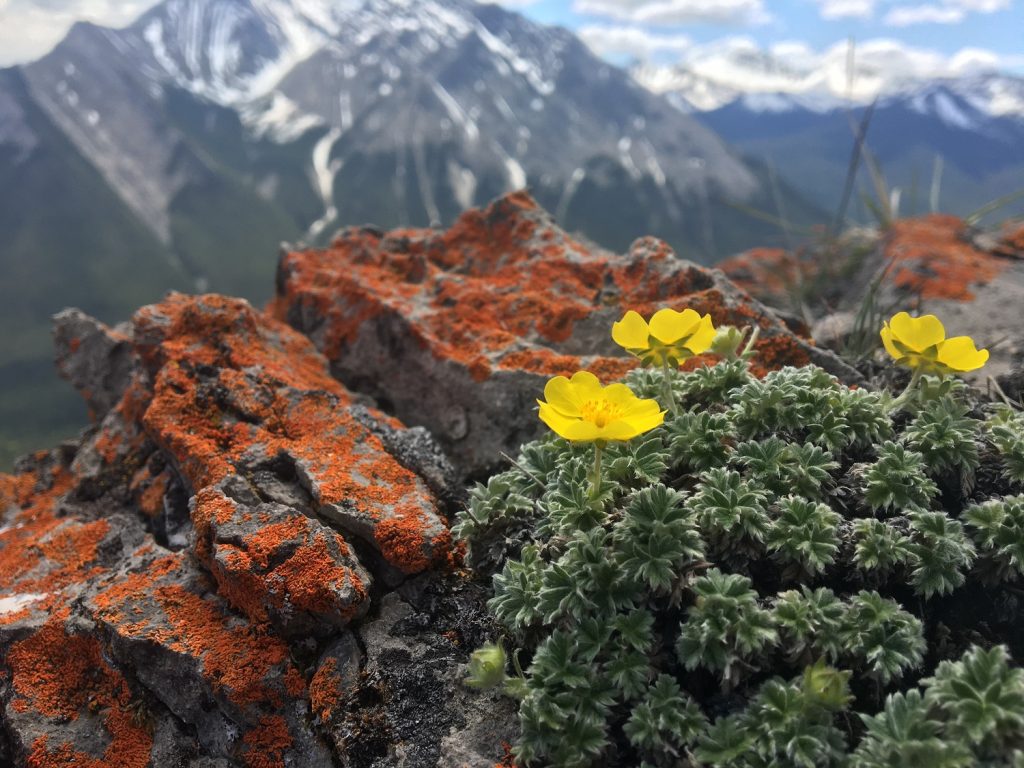 It’s Day 4 on the trail. It’s humid, hot, and did I mention humid? Our packs are impossibly heavy with food, camping gear, and sampling equipment. I wish there was someone else to blame for deciding to mix backpacking with field sampling, but unfortunately it was my idea. I have already cut myself on a rock and slipped into the frigid waters of Lake Superior as we struggle down the coastal hiking trail of Pukaskwa National Park. But all this suffering has rewarded us with just what we were looking for: plants!

Not just any plants, mind you. I was searching for alpine and Arctic plants, such as common butterwort (Pinguicula vulgaris), three-toothed saxifrage (Saxifraga tricuspidata), and alpine bistort (Bistorta vivipara). The same plants that greet me when I’m hiking high in Alberta’s Rocky Mountains. These cold-adapted plants are able to thrive on the bedrock shoreline along Lake Superior because the lake is cold and deep and has high winds that push its frigid air far inland. 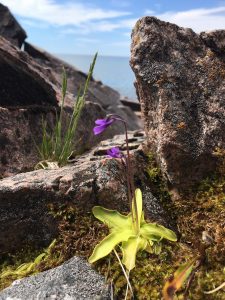 A common butterwort grows along the north shore of Lake Superior. These carnivorous plants are more commonly found in the Rockies and in the Arctic. ASHLEY HILLMAN

I’ve always been amazed at the adaptations alpine plants have to their harsh conditions. High above treeline, where it appears that nothing lives, if you look closely in nooks and crannies you’ll see plants. Tiny, clinging to cracks in rocks, but with the beautiful diversity of flowers you see in lower elevation forests. Their tiny, waxy leaves reduce water loss, their small size protects them from high winds and snow damage, and in some cases different species will clump together to reduce heat loss. These plants thrive in some of the harshest environments on Earth.

But how exactly did these alpine species —or at least what we consider to be alpine species — end up along Lake Superior, thousands of miles to the east? This was the question I sought to answer through my doctoral research. And this is what brought me to the shores of Lake Superior last summer.

It turns out that these cold-adapted plants did not miraculously disperse from the Rocky Mountains to Ontario. Instead, these plants were once widespread across Canada, and what we see today are just the remnant populations, which are sometimes widely separated or “disjunct.” To understand how this happened we have to travel back to the last Ice Age.

During the Ice Age, most of Canada lay under ice three kilometres thick. As the glaciers retreated, about 12,000 years ago, exposed bedrock was left behind. Populations of small plants adapted for harsh environments were among the first species to return, dominating the exposed bedrock where few other plants could survive. As our climate warmed over thousands of years, larger plants and trees were able to establish, and slowly outcompeted these small, bedrock-specialist plants. Today, these hardy little plants persist in only the harshest environments in Canada: the alpine habitat of the west, the high Arctic, and the cold, exposed shorelines of Lake Superior. These strongholds of cold conditions are known as climate refugia, and they’re becoming ever more important with climate change.

Climate warming will affect cold-adapted plants in different ways. Melting ice will expose more habitat for alpine and Arctic species, and earlier springs may allow some species to flower earlier and longer and be more successful at producing seeds. However, there are also drawbacks. Early springs may trigger development of leaves and flowers, but if a frost occurs after plants have leaves, those leaves can shrivel and die, potentially resulting in the plant’s death. Early flowering may seem beneficial, but if pollinators have not also emerged, then those flowers will go unpollinated, resulting in fewer seeds. In alpine regions of Alberta, warmer temperatures will allow trees to move further upslope into areas that were previously too cold or snow-covered. This advancing treeline will ultimately remove habitat for alpine species that rely on barren rock and an open canopy. As a result, plants that are adapted to cold conditions are at risk of becoming locally extinct.

Cold-adapted plants along Lake Superior face a unique challenge under climate change. In alpine and Arctic zones, cold-adapted plants can respond to warming temperatures by moving upslope or further north. At Lake Superior, however, there’s nowhere for them to go. Lake Superior’s shoreline is separated from other cold, exposed bedrock by thousands of kilometres, making dispersal to these alternative sites essentially impossible. Our early research into plant dynamics along the shoreline suggests that the outlook for cold-adapted plants here is not good. Under a moderate projection of 3.3°C warming, approximately 75% of disjunct plant habitat will no longer be suitable, and under a worst-case-scenario projection of 5.7°C warming, only 4% of their original habitat will remain.

A recent focus in the scientific community has been on mapping climate refugia throughout North America and using that knowledge to better inform conservation efforts. The idea is to protect sites that will retain cool conditions the longest to ensure that cold-adapted species will have the time they need to adapt to warmer conditions. And it’s not just plants that benefit from climate refugia. In Alberta’s alpine areas, heat-sensitive mammals such as pika can use climate refugia as they adapt to warming temperatures. In the case of isolated populations, like those at Lake Superior, the hope is that at least some species will survive within their current habitat. This will largely depend on how much warming ultimately occurs.

While the protection of refugia can help plants and animals transition to a warmer climate, the real key to conserving biodiversity is to slow the rate of climate change. Controlling greenhouse gas emissions, focusing on carbon sequestration within natural ecosystems, and supporting other climate change measures in the immediate future will be critical to avoiding massive losses of biodiversity. Therefore, we all have a part to play in ensuring the viability of our favourite alpine plants and animals.

Back on the rugged shores of Lake Superior, I drop my monstrous pack and plunk down beside a tiny crack in the bedrock. A few centimetres of soil are all that supports a colony of encrusted saxifrage (Saxifraga paniculata). This species is typically found in the arctic and in the Maritimes, but knowing that they’re still here, waiting to be surveyed, is all the fuel I need to keep struggling down the trail. Well, maybe some chocolate would help too.

Ashley Hillman is a PhD student in the department of Renewable Resources at the University of Alberta. She has a broad background in field research and has spent many seasons in the boreal forest, trudging through peatlands and swatting away insects. She is also an avid backpacker and naturalist, and can often be found slowing down a hiking trip to stop and look at plants.