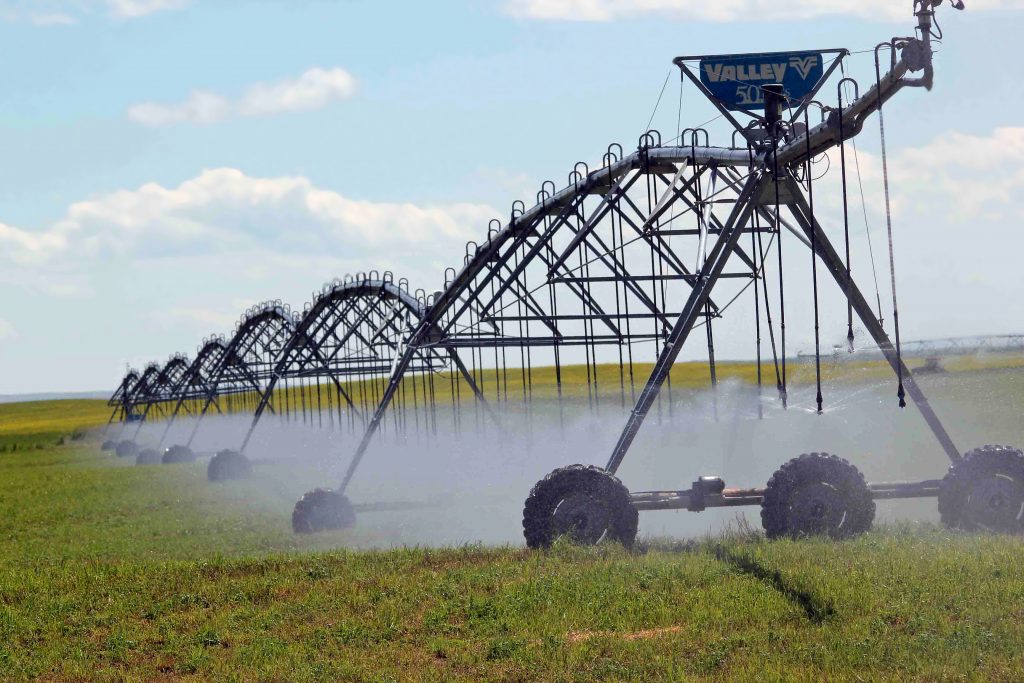 Irrigation enables crops to be grown in dry areas of the province but requires tremendous volumes of water, which is a finite resource.

In the heat dome and severe low flows of 2021, our canoe left smears of colour on several barely submerged boulders of one of Alberta’s prairie rivers. These low water levels had me reflecting on the recent scheme by southern Alberta’s irrigation sector to expand irrigated acreage. I thought of the old hymn, “Shall we Gather at the River.”

The details of this irrigation expansion, now spun as a “modernization” project, are sketchy, perhaps by design. Ten of the 13 Irrigation Districts, with funding support from the Province of Alberta and the Canada Infrastructure Bank, propose to “modernize” 56 components of irrigation infrastructure and construct (or expand) four off-stream reservoirs. The contention is that, with efficiency gains and new water storage, irrigation can be expanded by 230,000 acres.

Irrigation Districts now hold licenses to withdraw half of the average natural annual flow from southern Alberta’s rivers. This doesn’t leave much wiggle room for uses outside of irrigation because the other half of the South Saskatchewan River basin’s flow must be passed on to Saskatchewan. On average, Irrigation Districts withdraw two-thirds of their allocation each year. In dry years, essentially all is removed. The most critical period is in summer when demand is high for other uses of our rivers. 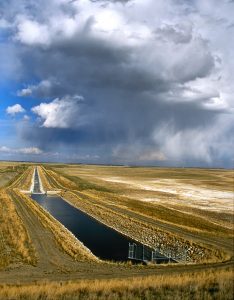 Irrigation has re-plumbed the landscape with dams, diversions, reservoirs, and canals to deliver water to a broad area of cropland in southern Alberta. Lorne Fitch.

Evidence from the government’s own reports suggest that southern Alberta rivers below major irrigation dams and diversions are stressed, some significantly degraded, and the prognosis is for a continual decline in river health.1 That was the inescapable conclusion even before the irrigation expansion project was proposed.

Irrigation Districts (and their precursors) have been diverting water from southern Alberta’s rivers for well over a century through an extensive, artificial plumbing network of dams, reservoirs, and irrigation canals. Irrigation infrastructure delivers water on demand over vast crop acreages in a landscape that is classified as semi-arid. The cost to develop and maintain this engineering marvel was (and is) borne largely from the public purse.

Alberta government departments charged with water stewardship have turned out to be the agents of water disposal, merely rubber-stamping the expansion demands of the irrigation sector. This is analogous to the proverbial fox guarding the henhouse. Other interests have been ignored and additional allocations have been passed out like party favours.

It wasn’t until 2006 that the Alberta government finally closed the Bow, Oldman, and South Saskatchewan sub-basins to further allocation. Some have commented this was too little, too late.

There might be a vague awareness of the environmental costs of irrigation, such as drowned river valleys above dams, rivers starved for water below diversions, and fish dying from habitat disruptions. But those costs are far beyond most citizens’ sensibilities.

Another critical factor to consider is that water flows in southern Alberta rivers are running into the wall of climate change. A warmer climate means less river flow and an inevitable limit to growth. There is the impression that we have amended the laws of nature in this dry land with complex engineering works and turned on a tap that never runs dry. But we haven’t.

According to Dr. John Pomeroy, Canada Research Chair in Water Resources and Climate Change at the University of Saskatchewan, about 80% of flow in the Saskatchewan River basin comes from the Eastern Slopes, mostly from snowpack, making southern Alberta’s rivers “very vulnerable to climate change.”2 Pomeroy believes it is “important to look at the whole thing before expanding irrigation in one part or managing it differently in another part, and we’re going to have to do that always with an eye to the mountains.” Lessons from south of the border backstop this statement, since over-allocation of water, coupled with drought in the Colorado River basin, has led U.S. governments to severely curtail water use by irrigators.

Modelling studies of the Oldman River at Lethbridge show drought, a reality under climate change, throws a significant wrench into the works — water needs would exceed supply and droughts that last more than two years could not be mitigated by reservoir storage.3 This shows building more reservoirs is, at best, a questionable adaptive strategy. We’re only fooling ourselves if we think we can outwit nature instead of adapting to its realities. 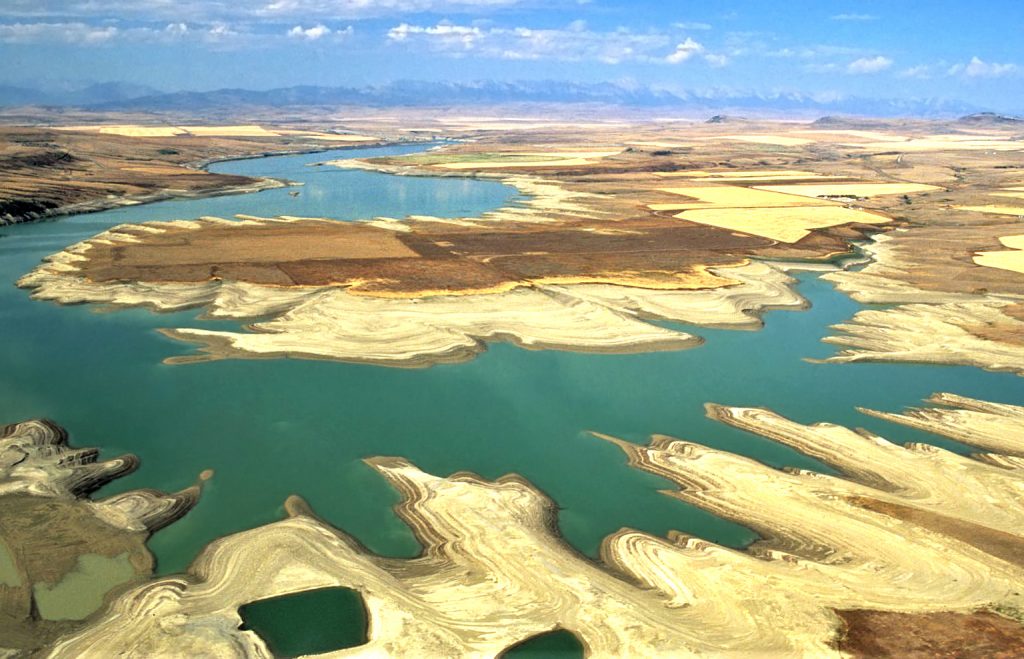 The depleted Oldman Reservoir after drought conditions in 2001. Droughts of more than two years in duration cannot be mitigated with reservoir storage. The irrigation sector needs to factor climate change into any expansion plan. Lorne Fitch.

It’s Time for a Realistic Assessment

There is a way of managing the issues of environmental flows, and that involves establishing limits — real ecological limits. An “instream flow need” is a rigorous, science-based recommendation for the amount of water that should flow at any particular time to meet the objectives of river health.

Healthy rivers should always have been the goal of management efforts, but while many waited for the answer from proper water flow research, water managers in the government of Alberta were busy giving away the water that would have assured a measure of ecological integrity. Now, because of allocations to irrigation, too little water is left to meet instream flow needs.

Our rivers, especially those in southern Alberta, show the strain of over a century of careless development. Provincial water managers seemed oblivious, even after a massive fish kill related to high water temperatures, exacerbated by excessive diversions, occurred on the Highwood River in 1977. This incident (and others) placed irrigation diversions and inadequate instream flows into the broad public consciousness.

But when you’ve exceeded ecological limits, all that’s left are some administrative band-aids to give the impression that our rivers are being managed to avoid ecosystem failure. These are rarely met and will not restore health to degraded rivers. In stark terms, southern Alberta rivers are on life support, without enough water to guarantee a healthy, functioning ecosystem. And that’s before any of the proposed expansion is considered.

Initiatives where there is a proposed investment of public money, that involve a public resource (water), and have the potential to significantly impact the public interest in broader matters of ecosystem health require scrutiny. What could be more in the public interest than the health of southern Alberta’s rivers?

Irrigation Districts, with support from government, boldly assert that this initiative does not require any public review. Therefore, this massive irrigation expansion could occur without a determination of whether or not it is in the public interest.

An independent review, through an environmental impact assessment, would clarify a mind-boggling amount of information on public interest matters, such as whether or not this expansion of irrigation is to come from efficiency gains, or is just another way to maximize water withdrawals. Is yet another massive injection of public money warranted when the result will be the sacrifice of something in the broad public interest — healthy rivers — for private enterprise profit, like we see with coal, petroleum and timber?

We need to get out of the “hydro-illogical” cycle, where every dam, reservoir, and efficiency gain is touted as solving the problem of water scarcity, until they are built and then the cry starts for the next one to solve the problem of not addressing limits, and so on, ad infinitum, ad nauseam.

In the continual focus on downstream structural features, no one seems to think about water sources — the headwaters. This is the ultimate “reservoir” for downstream water users and interests. In the headwaters, unsustainable logging, proposed coal mining, and a proliferation of roads and trails drain this natural reservoir too quickly. An environmental assessment with a broad scope is required to avoid past parochial decisions. Most significantly, such an assessment might allow those not benefitting directly from this scheme to see how other attributes important to a broader public, like similarly imperilled native grasslands, might be affected.

A review would help us answer the questions of how much is enough and whether we have already exceeded reasonable limits. It could also open up a new conversation about irrigation and about how to successfully adapt to changing conditions, which is imperative.

Where Will We Gather?

If this scheme is a race to exercise irrigation “rights,” to use up all the allocation, who eventually wins? It won’t be southern Alberta’s rivers and those who cherish them. Maybe irrigators could resolve to live with a little less water, so the river can have a little more. However, even those that foresee the upcoming crisis seem to accept none of the responsibility for it.

As Cheryl Bradley, an independent biologist who has followed this issue for years, observes: “There is a palpable reluctance to release water under [irrigation] licences, perhaps because it would mean relinquishing control over a valuable commodity in short supply.” In reality, giving up some of “their” water to let rivers live will not diminish irrigation agriculture.

What does it mean to take so much water out of southern Alberta rivers? Sadly, these rivers are shadows of what they once were. We know they are degrading, we know what they are degrading from, and we can measure their death throes. Natural justice and a sense of equity need to be injected into plans for irrigation expansion, while there is still a chance to salvage a better future for our rivers.

Otherwise, counter to the old hymn, there will be no living river left where we can gather.

Lorne Fitch is a Professional Biologist, a retired Fish and Wildlife Biologist and a former Adjunct Professor with the University of Calgary.

Posted in Conservation and tagged conservation, irrigation, Lorne Fitch, Shall we gather at the river
← Making Citizen Science CountOn the Trail of Disjunct Alpine Plants from Alberta to Ontario →