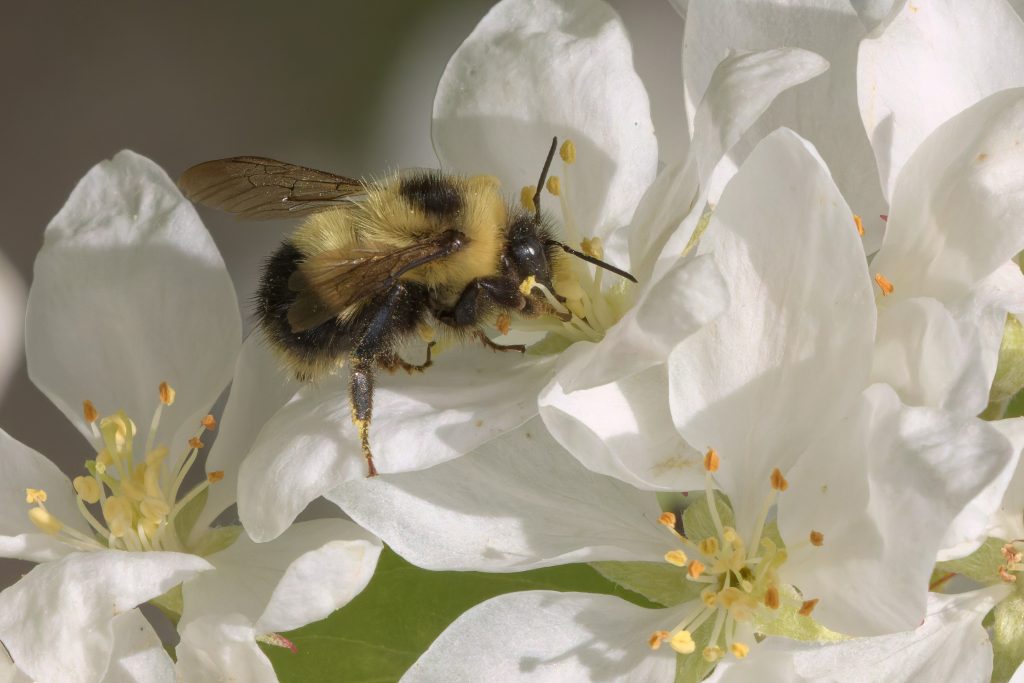 If you have spent any amount of time outside, you’ve undoubtedly encountered bees buzzing around in search of flowers. Images of bees adorn honey packages in the supermarket. There is a good chance you have heard the slogan “save the bees” somewhere, perhaps on social media or on a flyer at the local coffee shop. But to clarify, which bees does this sentiment refer to? Which bees need saving?

The species most people likely have in mind when they say “save the bees” is the western honeybee (Apis mellifera). The honeybee has a huge impact on the modern world, both economic and ecological. In Canada, honey production in 2018 was valued at $197 million, and the economic contribution of honeybee pollination to harvest value was valued as high as $5.5 billion.1 Because of the honeybee’s economic importance and long-lasting relationship with humanity, it holds a prominent position in the spotlight.

Although the honeybee is very familiar to us, you may be surprised to learn that it is not native to North America — it was imported by the first settlers. There are, however, almost 1,000 species of native bees in Canada. These native pollinators not only provide economic value through crop pollination, but also occupy many vital ecological niches and contribute to overall biodiversity. However, they receive much less attention than the highly managed and industrial western honeybee and may even face fierce competition from the honeybee over common resources.

The Plight of the Western Bumble Bee

A species that exemplifies this issue is the western bumble bee (Bombus occidentalis). This medium-sized bumble bee has a characteristic yellow band on the thorax, and often a white-tipped abdomen. It is a generalist forager and does not rely on any one flower type. 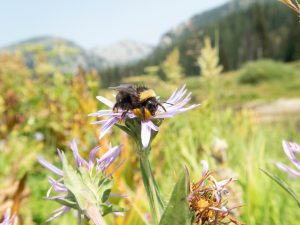 Once widespread across much of the western United States and western Canada, the western bumble bee has undergone a dramatic decline across its range. From the years of 2004 to 2014, a decline of approximately 30% has been reported.2 The exact mechanism of the decline is still unknown; however, several factors have been implicated.

The extensive and widespread use of pesticides is a major concern, especially the persistent pesticides, such as neonicotinoids, which started to see use in North America in the 1990s. Such pesticides leach into soil and water and circulate in the environment. Pollinators are exposed through the nectar and pollen of plants that have taken up the pesticides. Neonicotinoids are acutely lethal to insects at high dosage and at lower dosage can impair reproduction, reduce queen production and longevity, and reduce feeding.

Domesticated bumble bees used in greenhouses for pollination present another concern. These working bees can pose a significant threat to native bees via pathogen spillover: the spreading of disease and parasites from domestic to wild populations. Infection rates of common bumble bee pathogen Nosema bombi was found to be three times higher than normal at sites near commercial greenhouses that employed domestic bumble bees.3 The full extent of lethal and sub-lethal effects of such pathogens has yet to be characterized.

Other possible threats to the western bumble bee include climate change and competition from non-native bees, such as the domesticated honeybee. These threats remain mostly unquantified, and more research is required to assess their direct impacts.

It is doubtful that any one of these threats single-handedly caused the swift decline of the western bumble bee. Rather, it is likely that the combined and synergistic effects of these factors is what resulted in their current plight.

The decline of the western bumble bee and other bees has attracted widespread attention. From the public to industry, support for pollinator protection is growing.

The agricultural industry is a major pillar of our economy, and it is the most impactful and powerful stakeholder by far. Unfortunately, conservation efforts often carry an economic cost for farmers, which may affect their support for conservation. For example, in a survey of responses to Ontario’s 2014 Pollinator Health Action Plan, respondents who self-identified as farmers were 13% less likely to support regulation of neonicotinoid pesticides than other respondents.4 That said, agricultural professionals do recognize the value of pollination as an ecosystem service, so there is some support in the industry for pollinator protection.

Commercial beekeepers, while being a part of the agricultural industry, hold a unique position. In the aforementioned study of stakeholder attitudes, beekeepers were found to be 28% more likely to support enhanced neonicotinoid regulations than other respondents. This is likely because neonicotinoids have a negative effect on managed bee colonies, and as such can cause significant economic damage to the beekeeping industry. Therefore, there are divergent views within the agricultural industry, and there exist some voices that strongly support native pollinator conservation.

The general public has shown strong support for measures that promote pollinator conservation. For example, 96% of public respondents to the Ontario Pollinator Health Action Plan were in favour of reducing neonicotinoid use for the purpose of pollinator protection. However, public understanding of bee and pollinator diversity is limited, and media attention is often directed toward domestic honeybees, rather than native bees. This could prove problematic when it comes to public support of policy implementations, since protection measures that specifically target honeybees may not provide the support needed by wild bee species.

Environmental groups play a pivotal role in conservation efforts. Organizations such as Wildlife Preservation Canada and the Xerces Society for Invertebrate Conservation have been critical in providing research, education, and advocacy for native pollinators. Corporate sponsors are important as well because they provide much of the funding required to run these programs. One sponsor of Wildlife Preservation Canada’s bumble bee recovery program is the popular beeswax-based cosmetics company, Burt’s Bees.

In summary, there is broad agreement that pollinator protection is important; however, the level of support for conservation efforts varies among stakeholders.

What Is Being Done?

There are three broad management actions that are commonly proposed for pollinator protection: pesticide regulation, implementation of agricultural best practices, and habitat protection and restoration. Each of these activities has been implemented to varying degrees.

The regulation of neonicotinoid pesticide use is currently a high-profile topic in Canada. There are three main neonicotinoid pesticides approved for use in Canada: thiamethoxam, clothianidin, and imidacloprid. As part of the pollinator protection program, Health Canada prohibits the use of these pesticides on bee-attractive crops, such as orchards.5 The spraying of certain fruiting crops before or during bloom is also prohibited. Recently, Health Canada has implemented stronger regulations on neonicotinoids aimed at protecting aquatic invertebrates. However, an outright ban of neonicotinoids for protection of bees and other pollinating insects has not yet been issued. This continues to be a point of contention for many conservationists.

Agricultural best practices for pollinator protection are available as a set of guidelines published by Health Canada. These include proper pesticide handling techniques, integrated pest management, and habitat protection. While these techniques are likely beneficial for pollinator health, there is no legal requirement for their implementation. It is up to individual farmers to learn about and voluntarily follow the guidelines, if they so choose. This makes it difficult to assess whether these conservation measures will be effective on a meaningful scale.

A management concern that remains unaddressed is pathogen spillover. Despite the fact that the western bumble bee has one of the highest pathogen loads of any North American bumble bee species,2 no steps have been taken to resolve this problem. This may be attributed to knowledge gaps, as well the complexity of the threat: there is no simple solution.

Another important gap in management is that the western bumble bee still lacks legal protection under the Species at Risk Act. Though it was assessed as Threatened by the Committee on the Status of Endangered Wildlife in Canada in 2014, it is still waiting to be officially listed. Formal designation and the associated development of a federal recovery plan will be crucial for the implementation of habitat protection and other more stringent management actions.

What Can I Do?

There are several ways you can help in the efforts to save the western bumble bee and other native bees. One is supporting environmental groups that have active programs for pollinator protection. Wildlife Preservation Canada has several active programs, including conservation breeding and the monitoring of at-risk populations. The Alberta Native Bee Council (albertanativebeecouncil.ca) promotes the conservation of native pollinators across Alberta. There is also a community science program, Bumble Bee Watch, that empowers the public to aid in bumble bee conservation efforts. You can learn more about ways to get involved at bumblebeewatch.org.

While the situation may appear grim for our bees, it is not all doom and gloom. One recent victory for native bee conservation in Alberta was the discovery of a pair of gypsy cuckoo bumble bees (Bombus bohemicus) in Calgary’s “bee boulevard.” The boulevard is a project that aims to provide high-quality pollinator habitat in the heart of the city. The gypsy cuckoo was designated as Endangered in 2014, so its appearance is a sign that the project is headed in a good direction.

The story of the western bumble bee is not a unique one. There are many other native bee species out there that need our help to overcome the threats for which we, knowingly or unknowingly, are ultimately responsible. The growth of public awareness and concern is an encouraging sign but this now needs to translate into meaningful conservation actions. We can only hope that none of our bees are too far gone to save from extinction.

So now when you hear, “save the bees,” think not only of the honeybee, but the hundreds of native bees that are facing the same threats, as well as their own unique challenges. We must see beyond the economic and agricultural value of bees and recognize the ecological value and diversity of our native species.

Nicholas Boyce is an undergraduate student majoring in Biological Sciences at the University of Alberta. Nicholas first became involved with bee research during an internship with Agriculture and Agri-Food Canada, and hopes to build a career in conservation after completing his studies.