Outer space may still be a frontier, but the space we call wilderness is getting increasingly crowded. The refrain I hear, from people who remember the Eastern Slopes from a previous era, echoes Yogi Berra’s enigmatic statement that “No one goes there, it’s too crowded.” I know I’m reluctant to visit there now, based on my memories of a place much quieter, with less traffic and fewer people.

Some might retort, with some accuracy, that this is typical complaining from an old grump. There is, though, a yin-and-yang aspect of growing old. On the minus side you have constantly forgetting where the car keys were left. On the plus side are vivid memories of the “good old days” which form a significant benchmark against which to measure changes.

My formative years were spent in the Rocky-Clearwater and Bow-Crow forests, from the late 1950s through to my entry as a biologist in the early 1970s. During family excursions along the Forestry Trunk Road we would rarely encounter another vehicle. When camping at Ram Falls, we mostly had the place to ourselves. As I started independent hunting, fishing, and hiking journeys it was similar — few other people and you could scan for game from the middle of the road without getting run over. I thought it was paradise.

Henry Stelfox, who immigrated to Alberta in 1906 and became a conservationist and unpaid game guardian based near Rocky Mountain House, might have felt differently. He would have found the Forest Reserve in the 1970s crowded by comparison to his earlier memories.  Stelfox roamed the upper Clearwater watershed when caribou were still present, prior to the construction of the Forestry Trunk Road in the early 1950s. The Eastern Slopes might have been described as the “Big Empty” in Stelfox’s time. Without benchmarks the sense of paradise shifts and erodes imperceptibly to a shadow of a former time.

History teaches lessons in limits. Alberta has been through an earlier era of abundance; we are now in an era of over-exploitation. We need to move on to an age of prudent conservation and protection of what’s left. 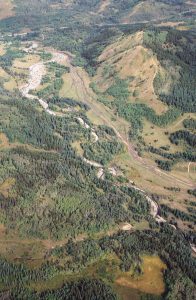 It's said, with evidence, that “the army of ecological destruction comes by road.” It might be just as true that the decline in recreational quality does so as well. Crowding, noise, and declining fish and wildlife populations have those of us with long memories sensing the balance has tipped, or is close to it.

At least 20 cumulative effects studies involving portions of the Eastern Slopes by government and arm’s-length organizations provide a compelling picture that road density and the logging footprint will shortly reach, or has already exceeded, ecological thresholds. The risks to water quality, hydrologic response (including more and bigger floods), threatened trout species, and several wildlife species are clear.

It's also clear that recreational interests are at odds with one another. We can’t continue to do everything, everywhere, all the time, any time and not start running over each other, figuratively and literally. It’s time for a day of reckoning and that includes all of us who recreate in the Eastern Slopes.

Space, once abundant and taken for granted, has shrunk to the point that the Eastern Slopes are not the place to “get away from it all,” but rather the place where “all have come to get away.” Added to a very busy economic landscape of logging, livestock grazing, petroleum development, gravel mining, and coal exploration (and a few struggling coal mines) are random campers, off-highway vehicle users, mountain bikers, e-bikers, hikers, anglers, hunters, geocachers, climbers, cross-country skiers, equestrian riders, paddlers, wildlife viewers, photographers, snowmobilers, and drive-through tourists. The landscape is crowded, and if the experience of the Covid years is any indication, our love affair with the Eastern Slopes isn’t over, it is just beginning.

When I started my rambles in the Eastern Slopes, Alberta’s population was 1.3 million. Now it’s 4.4 million with an average annual growth rate of 1.4%. That sounds low, but the math tells us that in another 25 years an additional two million people with economic and recreational interests will make Alberta home. Like the principle of compound interest, if the Eastern Slopes are busy now, imagine the future.

Fire marshals set capacity limits for buildings, restaurants can only serve as many as they have table space for, and there are only so many seats on the bus. There is a direct parallel to the Eastern Slopes — it is not an expanding universe, like outer space. It is a fixed space, with only so much room for our economic and recreational pursuits. The more we ask that space to do, and the more of us doing it, the less able these landscapes are to provide their watershed function, a haven for fish and wildlife — as well as quality recreational opportunities.

Everyone has experienced the frustration of a decline in quality, whether from a product, a service, or an experience. It leaves us feeling cheated somehow, as though things could — and should — be better. But as quality continues to decline, we realize that without an intervention it’s just going to get worse.

Recreation management entails increasing the quality of recreation by resisting the things that will diminish the experience. For decades we have set limits on livestock grazing on public lands through assessments of carrying capacity. If we can do it for cows, we should be able to do it for humans in the Eastern Slopes. Recreational carrying capacity is concerned with determining the number of users that can be accommodated in a given area without loss in the quality of the natural environment and/or the recreational experience. It is challenging, but not impossible, to integrate human values into resource management decisions.

Other jurisdictions facing human population pressures have addressed the protection of landscapes and essential ecological functions while at the same time providing quality recreational experiences. The consistent theme is that recreation is treated as a land use requiring planning, management, evaluation and enforcement.

While there is no magic formula for setting recreational capacities, the beginnings might be found in the policies that initially established the forest reserves, national parks, and provincial protected areas within the Eastern Slopes. Watershed protection, either explicit or implicit, is a priority for all of these zones, in spite of repetitive resource management decisions that run counter to good words and intents.

If we can agree there are ecological capacities that shouldn’t be exceeded, that is a starting point. However, that is a big if, since some refuse to acknowledge their recreational pursuits diminish environmental quality. Paradigm shifts are hard because Albertans seem hardwired to view use of the Eastern Slopes as an entitlement.

To a degree the argument might hinge on how one defines “quality.” Recreational quality can be related to perceptions of crowding, or exceeding physical capacity. It can be tied to facility capacity, as in what amenities like campgrounds, parking lots, or restrooms are available. How one defines quality is also tied to social capacity, freedom of choice, or how one reacts to crowding, competition, noise, and possibly the perception of threats or danger from other recreationalists.

To some, an accumulation of recreational vehicles scattered over every level piece of a streamside meadow, at the hub of a spiderweb of muddy off-highway vehicle trails, with random firepits, hacked-off trees, and no toilet facilities might be considered a quality recreational experience. This does not meet the test for environmental quality because of compacted soils, loss of water infiltration, erosion and sediment additions to streams, displacement of wildlife, loss of riparian vegetation, and possible contamination of water quality from the lack of toilet facilities.

Since this is an issue of regional planning, where is the Alberta government headed? Only two of seven regional plans have been published and there are glaring deficiencies in these. The rest are dead in the water and indicate an antipathy to regional planning, the logical place to have discussions on a variety of land uses, including recreation.

In southern Alberta, the Livingstone-Porcupine Hills Land Footprint Management Plan plotted a course to deal with a very busy landscape that was screaming for attention like a boiling tea kettle. The issue of road and trail density was addressed with a line-in-the-sand threshold. This was subsequently blown out of the water with the Alberta Energy Regulator approving new coal exploration roads which now exceed the thresholds for linear density. The recent Trails Act is a blatant attempt to circumvent the ecological thresholds for road density and jump over a subregional plan that had broad public involvement and consensus. The Livingstone plan promised spatial footprint thresholds to deal with industrial land uses like logging. Three years later, there is no indication that the spatial footprint is being addressed. Continual failures to address carrying capacity compound over time.

When it comes to recreation, it seems the government is oblivious to the existing and future recreational pressures in the Eastern Slopes. It’s hard to see clearly when there are loonies over your eyes. A government-funded study by the Tourism Industry Association of Alberta (2021) had six recommendations about growing recreation, but made no mention of how to manage growth to protect ecological values or how to maintain recreational quality. We have yet to learn that more is not better.

Would limiting recreational use to enhance recreational experiences be easy to implement in the Eastern Slopes? Hardly! Given our tendencies toward individualistic freedom, this would not be viewed as visionary, but rather as overreach and too restrictive. However, if we took a clear view of crowded parking lots, increasing levels of frustration and anger between recreational interests, biodiversity concerns, an increasingly trashed landscape, and a decline in perceptions of recreational quality, we might at least be moved to start a conversation.

With population pressures and expectations, the reality is we are not going back to an era of abundant empty space and fewer people. What we can do is start working, with vision and restraint, on a way to salvage recreational experiences in the face of increased population pressures. It’s not too late, but it will be soon. If we don’t acknowledge the trends, the fear is we will kill the goose that lays the golden eggs — that is, the Eastern Slopes landscapes that provide those quality recreational experiences we hold dear in our hearts and memories.

Lorne Fitch is a Professional Biologist, a retired Fish and Wildlife Biologist, and a past Adjunct Professor with the University of Calgary.