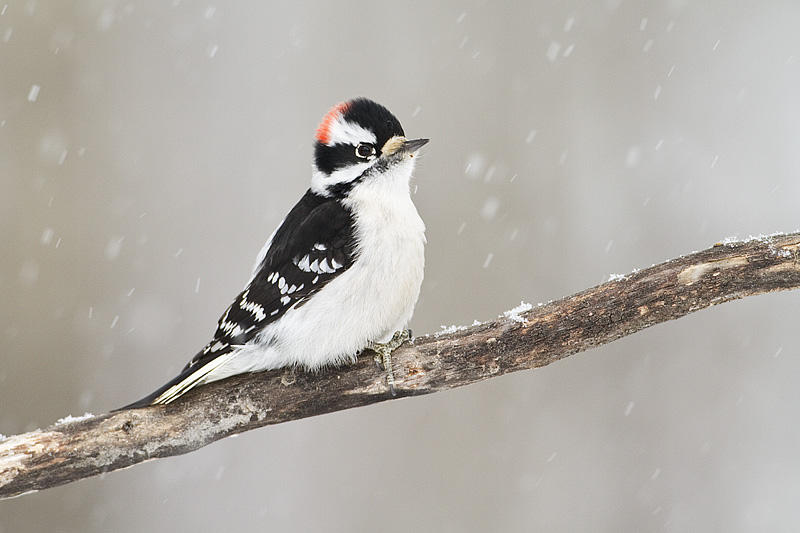 Black-capped chickadees are certainly our most common winter feeder visitors (see Myrna Pearman’s article on page 5), but downy woodpeckers are often a close second. Both downies and their larger cousins, hairy woodpeckers, are year-round residents in our winter forests.

Downy and hairy woodpeckers are two of six species of woodpecker found in Alberta. All of our woodpeckers, except the flicker, are black and white, but the downy and hairy have white as well as black on their backs and the males have a red patch on the head. The two species look very similar but with practice you can easily distinguish them by size. The downy is our smallest woodpecker, measuring about six to seven inches long, and its thin bill is shorter than the length of its head. The hairy is larger, nine inches or more, and has a chisel-like bill that is longer than its head. 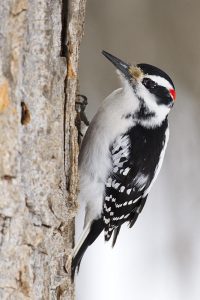 As you might expect, woodpeckers have special adaptations for pecking on wood. Their chisel-shaped beaks easily cut into tree trunks and reinforced bones in the skull prevent brain injury. The birds also have two toes facing forward and two facing back to give them a better grip. Stiff tails help them brace themselves as they climb.

You can find both downy and hairy woodpeckers in poplar and mixed-wood forests all across the province, but the hairy tends to prefer older forests with large trees, while the downy is more common in open aspen woods.

Like most woodpeckers, these birds are insect eaters. They can regularly be seen moving up trees and along branches, searching for prey on and under the bark. The smaller downy often looks for food out at the ends of branches or on weed stalks, while the hairy prefers to dig beetles and their larvae out of tree trunks. Downies also dig tiny wasp grubs out of the swollen growths or galls that develop on the stems of goldenrod. You can attract both species to your feeder with suet and beef fat as well as sunflower seeds. 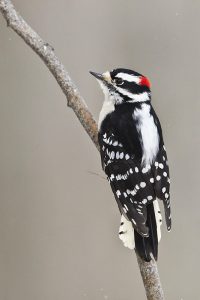 Come early spring, you may start to hear drumming in the woods — the song of the male woodpecker. In April, mated pairs will begin the two-week-long task of digging out a new nest hole. Downy woodpeckers usually choose a dead tree or dead branch, while the larger hairy is also able to tackle a live tree with a rotting heart.

Once the eggs hatch, four or five chicks are fed by both parents for about three weeks. The adults are quite secretive around the nest site but, since they are safe from most predators, the young call almost constantly.

Downy and hairy woodpecker numbers are not declining as much as many of our songbirds, but they are still being affected by habitat loss. By leaving dead trees everywhere from backyards to cut blocks, we can provide important nesting and feeding sites for woodpeckers and the many creatures that use their nest holes after they leave.

In our quiet winter woods, you can often hear woodpeckers tapping away as they move through the trees in search of a meal. Their insect food may invisible to us, but woodpeckers are well-equipped to find their favourite hidden morsels.

Margot Hervieux is a founding member of the Peace Parkland Naturalists, an honorary member of Nature Alberta, and a longtime Nature Alberta board member. A version of this article originally appeared in her “Naturally Yours” column in the Peace Country Sun, which she has been writing for 15 years. You can read more of her archived columns at peacecountrysun.com