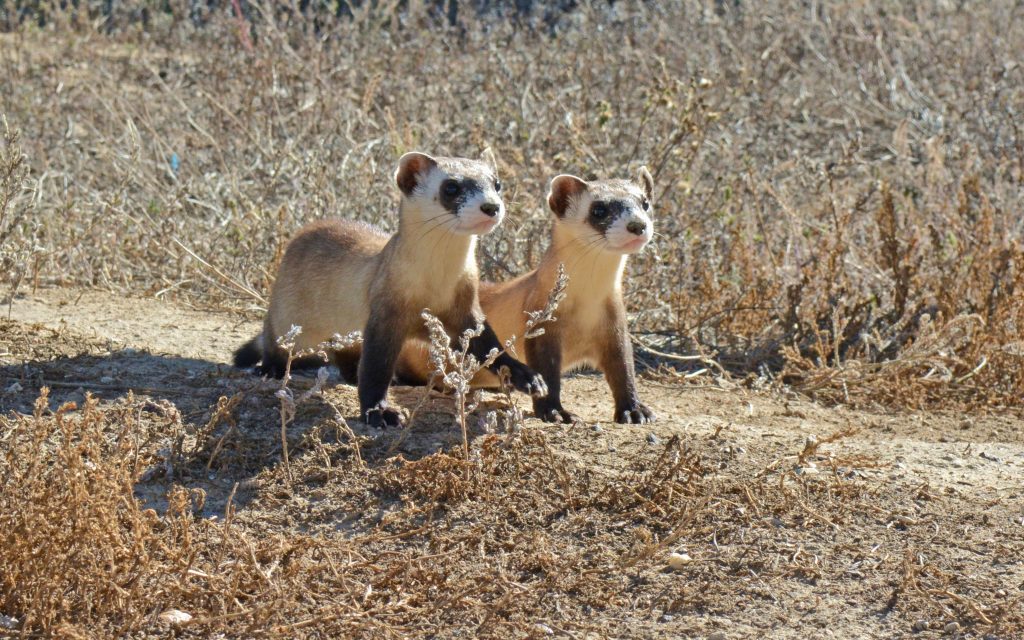 The black-footed ferret got its nickname, the prairie bandit, from the black “mask” of fur that surrounds its eyes and true to form, this critter is mainly active at night. It is the only species of ferret native to North America and is a mustelid, the same family as other small carnivorous mammals like weasels and badgers. An intimate relationship exists between the black-footed ferret and the prairie dog; the ferret lives rent free in burrows dug by prairie dogs and relies on them for 90% of its diet. Without prairie dogs, these specialist hunters cannot survive.

With populations already dwindling due to lack of prey, disease was the last thing the ferrets needed. Unfortunately, disaster struck again when humans inadvertently introduced canine distemper virus and sylvatic plague to vulnerable ferret populations. Canine distemper is nearly 100% fatal in ferrets. Sylvatic plague — which caused the “Black Death” in humans — can kill both ferrets and their prairie dog prey. Both these diseases decimated the already vulnerable black-footed ferret populations.

The Return of the Prairie Bandit

Fortunately, the initial verdict of extinction was found to be premature when, in 1981, a small population of black-footed ferrets was discovered near Meeteetse, Wyoming. With this unexpected second chance, conservation biologists were determined ensure the ferrets’ recovery. In 1985, the remaining 24 wild ferrets were collected to initiate a captive breeding program run by a network of zoos across North America. With such a small founding population, care had to be taken to avoid inbreeding depression, a harmful genetic condition that results from the mating of closely related individuals. Overall, the captive breeding program has been a great success. Genetic integrity has been maintained at an acceptable level and more than 8,000 kits have been born.2 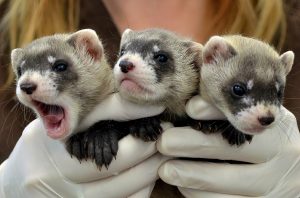 In 1991, biologists started a reintroduction program. The first step, once the kits were old enough to be weaned from their mother’s milk, was to place the kits in a pre-conditioning pen to learn key ferret skills, like hunting prairie dogs, to maximize their chances of survival in the wild. After spending sufficient time learning “how to ferret,” they were released into the wild at one of 29 sites across North America.

Reintroduction would not have been possible without the tireless efforts of governments, zoos, private landowners, and conservation organizations. In the United States, there are now four thriving populations of black-footed ferrets. However, the success of the reintroduction program has not been without a few bumps in the road. Ferrets reintroduced to sites in Canada and Mexico have unfortunately failed to produce self-sustaining populations due to drought, disease, and lack of prairie dog prey.

Additional support for black-footed ferrets came in 1996, when a vaccine was developed to protect the ferrets against canine distemper.3 All captive-bred ferrets now receive this vaccine before their release into the wild. There is also a vaccine that protects ferrets from the worst symptoms of sylvatic plague. An oral form of this vaccine has been developed that can be delivered in a peanut butter-flavoured bait to protect prairie dog populations as well. Temporary relief from plague can also be achieved by dusting prairie dog colonies with insecticides that kill plague-carrying fleas. By combining these approaches, great strides have been made over the past few decades in dampening the effects of disease outbreaks in both ferret and prairie dog populations.

Canada hosts the northernmost range of the black-tailed prairie dog and, historically, the black-footed ferret. Where there are prairie dogs, there are opportunities for black-footed ferrets to flourish. To that end, in 2009, a team of biologists in Saskatchewan’s Grasslands National Park released 34 ferrets into the park. An additional 30 captively-bred ferrets were released over the next three years. However, the reintroduction efforts were put on hold in 2013 when successive years of drought and disease caused the disappearance of the park’s entire ferret population. Wildlife managers in Grasslands National Park are now focusing on rebuilding the black-tailed prairie dog population in the park but have not given up hope that the black-footed ferret may yet one day return to Canada.

How You Can Aid and Abet this Bandit

Black-footed ferret conservation does not exist in a vacuum. To ensure the continuation of healthy ferret populations, larger issues must be addressed. As the climate continues to change, prairie ecosystems will be faced with more bouts of extreme weather, like drought and flash floods. These conditions are challenging for prairie dogs and limit the potential for ferret reintroduction. To do your part, explore ways to minimize your carbon footprint in your everyday life.

Furthermore, in addition to being home to many species at risk, grasslands themselves are one of the most endangered ecosystems on the planet. You can show your support for black-footed ferrets and prairie dogs by supporting grassland restoration and protection initiatives.

If you are looking for a more hands-on way to help ferrets and prairie dogs, Parks Canada, in collaboration with the Calgary Zoo, runs volunteer programs that bring people interested in grassland conservation efforts out to Grasslands National Park to assist with monitoring prairie dog populations. This program is unique among species-at-risk initiatives in that Canadians have the opportunity to step off the sidelines of conservation and have a direct impact.

Finally, if you are looking for a more intimate experience with the most endangered mammal in North America, plan a visit to the Toronto Zoo. Your patronage of the only Canadian zoo to breed and house these ferrets will support their efforts to facilitate the prairie bandit’s comeback.

The prairie bandit has come a long way from assumed extinction, but its journey is far from over. Together, we can help restore grasslands to their former glory, with abundant populations of both prairie dogs and black-footed ferrets for generations to come.

Arya Horon holds a B.Sc. in Biological Sciences from the University of Alberta. She is passionate about human-wildlife coexistence and animal behaviour, and hopes to continue her scientific career by pursuing graduate studies next.