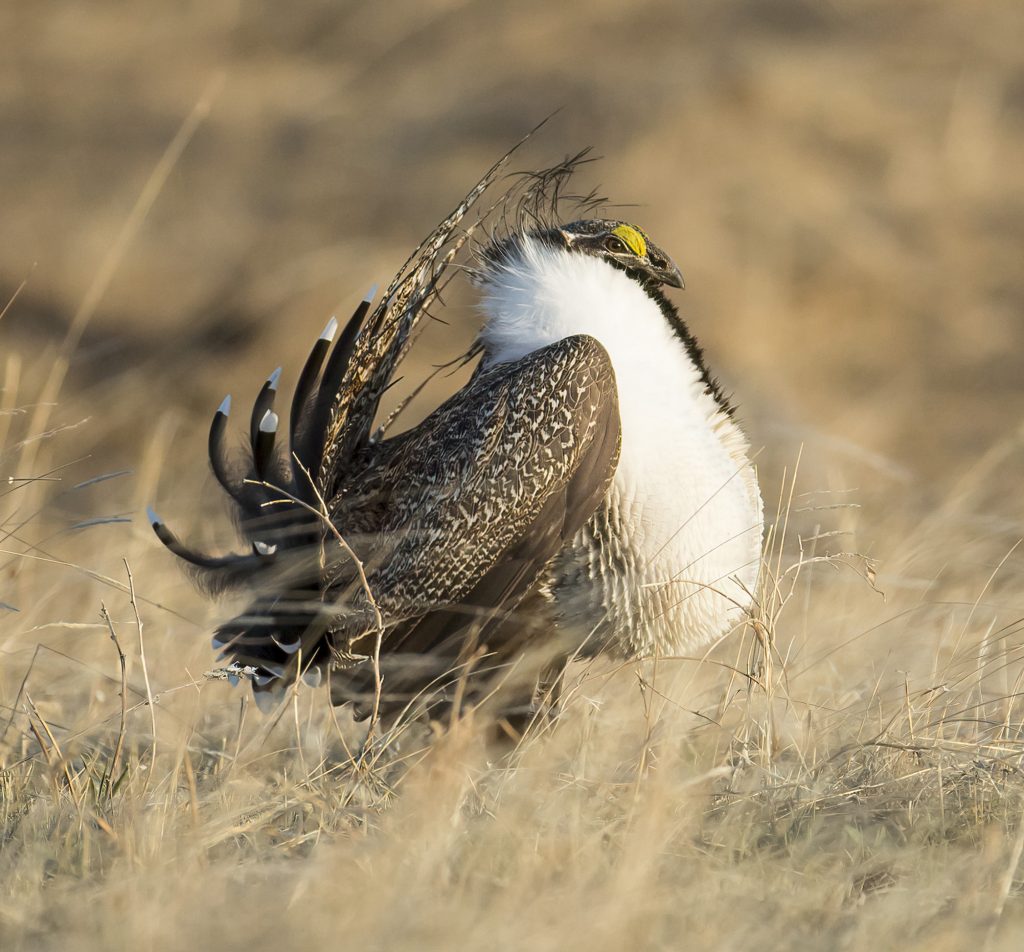 If you have never seen or heard of the greater sage-grouse and its mating ritual before, I encourage you to take a moment to watch a video before proceeding. No words I can put to this page will adequately capture the beauty and hilarity of the dance these birds perform at their seasonal mating grounds. Take a look at this video from PBS’ Nature: bit.ly/sagegrousemating.

And welcome back. Hopefully, you had a laugh, but now it’s time to get serious. The long and short of it is that this species is dangerously close to being completely extirpated from Canada.

Since 1968, biologists have been gathering population data on sage-grouse by taking advantage of their seasonal mating displays. These displays occur at specific locations known as leks. Because the males put in a great deal of effort to make themselves as visible as possible, counting males at leks is an easy way to estimate the size of the population in a given area. As of 2020, the Albertan population of greater sage-grouse was estimated to be 72 individuals — down from the thousands that were present when we started keeping track in 1968.

It is widely accepted that this decline has been primarily caused, both directly and indirectly, by humans. Habitat is the key issue. You see, the sage-grouse isn’t so named because gives wise advice; it actually gets its name from the obligate relationship it has with the sagebrush. This herbaceous plant makes up the majority of its diet in the summer and virtually 100% of it in the winter. Ever since Europeans settled the West, this habitat has become increasingly degraded.

Agricultural conversion has been the leading factor in this transformation, eliminating more than 70% of the sagebrush grassland this bird calls home.1 In recent decades, the cultivation of native grasslands has declined, mainly because the majority of the arable farmland has already been accessed. However, agricultural intensification remains a major concern. Wetlands are being drained, remnant patches of native vegetation are being removed, and the use of herbicides and pesticides has increased. The spread of non-native pasture grasses, such as crested wheat grass and smooth brome, into remnant patches of native prairie is also a major problem.

Oil and gas development has also contributed to sage-grouse declines, especially in Alberta, where more than 1,500 wells have been drilled within sage-grouse habitat. Habitat fragmentation has been exacerbated by the vast road network that now exists across the prairies, along with fences, settlements, and many other forms of human infrastructure.

Some species, such as magpies and coyotes, can thrive in presence of human infrastructure and disturbance. But not the greater sage-grouse. The noise created by farm equipment, pump jacks, and even highway traffic can cause the birds to abandon an area, even if it is otherwise perfectly intact.2 This is particularly problematic when such activity is near a lek, as these predetermined annual meeting spots are required for sage-grouse to complete their eccentric mating ritual. This bird doesn’t dance (and by extension doesn’t mate) without a stage. Additionally, structures such as pump jacks, road signs, and power lines can serve as perches for predators like the great horned owl, making it easier for them to prey on sage-grouse.

As a result of these factors, sage-grouse have been squeezed into a smaller and smaller area of suitable habitat. Today, they occupy only 7% of their former range in Canada, which had previously extended over 100,000 km2.3 The remaining fragments are located in southern Alberta and Saskatchewan.

As if this wasn’t enough, sage-grouse must now also contend with the ever-present and insidious threat of climate change in the coming years. The main concern is the effect that extreme weather events, such as droughts and heat waves, will have on the population. All of this is to say that the situation has become quite dire for our eccentric feathered friends.

The first major step in the recovery of sage-grouse was its designation as an endangered species by the Committee on the Status of Endangered Wildlife in Canada in 1998. A federal recovery strategy was published in 2008; however, it failed to identify and protect critical habitat for the sage-grouse, as prescribed by the Species at Risk Act. This prompted a lawsuit by four environmental groups in 2008. The suit was successful and the government was ordered to redraft the recovery strategy to include at least some of the bird’s critical habitat.

The recovery strategy and lawsuit stimulated a lot of action behind the scenes, mainly involving research and planning. But little was done in terms of actually protecting critical habitat. All the while, sage-grouse numbers continued to decline. This prompted another lawsuit, this time requesting an Emergency Protection Order under the Species at Risk Act. This lawsuit was also successful, and in 2014 Cabinet issued the Emergency Order — a legal first.

While frustratingly slow in coming, the Emergency Order does offer some legal protection to sage-grouse in southern Alberta and Saskatchewan. New infrastructure development is prohibited, sagebrush and other native plants are better protected, and noise above 45 decibels is not allowed. However, the Order has nothing to say about grazing and other aspects of range management. Moreover, the protections apply only to federal and provincial Crown lands (totaling 1,672 km2), not to private lands that occupy a large proportion of sage-grouse critical habitat. So, while the Order provides some protection and has brought much attention and funding to the sage-grouse issue, it is far from a comprehensive solution.

Another important step that has been taken to support Canadian sage-grouse is population augmentation. Their numbers have fallen to the point that the population is now at high risk of being completely wiped out by chance events, such as a period of extreme weather. With such a small population, the loss of genetic diversity and increased risk of inbreeding also come into play.

Augmentation can involve either captive breeding of individuals for later release or translocation of individuals from an area where a larger, stable population exists. Both forms of augmentation have been used in Canada, though captive breeding has proved to be challenging because sage-grouse don’t take well to captivity. The Calgary Zoo, Nature Conservancy Canada, and Parks Canada worked together to release 66 captive-bred sage-grouse in 2019. Careful planning was required to time the release of the birds in the fall, with the hope that they would integrate into the population through the winter.

Alberta Environment and Parks, in collaboration with the Montana Department of Fish, Wildlife and Parks, have completed three out of four planned translocations of sage-grouse from Montana to Canada. A total of 118 individuals have been translocated into Canada under this program. Unfortunately, the fourth translocation, which was planned for April 2020, was postponed due to the pandemic. Not to be dissuaded, these agencies plan to finish the last translocation in the spring of 2022.

Although these augmentation programs have achieved their intended goal of preventing complete extirpation in the short term, they are quite expensive and only serve to buy additional time for us to fix the real issue: repairing the habitat that we have damaged. In that regard, some significant management strategies are being implemented. For instance, efforts are being made to reclaim oil and gas sites and to remove fences and other human-made structures in sage-grouse habitat. 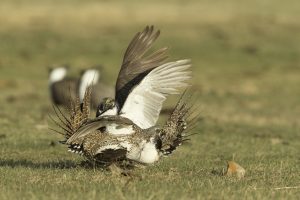 Male greater sage-grouse are very territorial during mating season, fighting for their spot on the lek. Ron Hayes

I reached out to Joel Nicholson with Alberta Environment and Parks, who informed me that there were reasons to be hopeful. Talking about sage-grouse recovery efforts in Canada, he said there has been a significant amount of movement in the right direction in recent years, particularly with respect to oil and gas reclamation in the sage-grouse habitat. He also told me that development on the landscape has been declining, and that, for the first time in years, reclamation has been outpacing development. Protected areas, such as in Govenlock, Saskatchewan, also continue to be created.

When it comes to ranching, research has shown that, depending on the timing and intensity of grazing, the presence of livestock can actually benefit sage-grouse populations.4 If done correctly, cattle grazing can partially mimic the natural disturbances that were previously caused by the plains bison. This can result in greater plant diversity, which boosts habitat quality for sage-grouse and other grassland species. In the same way, bringing fire back on the landscape, in a controlled fashion, can also be helpful. Findings such as these have led to sustainable grazing programs in selected areas like Grasslands National Park, and they reveal a potential way for local ranchers to get involved in recovering the species. The challenge now is to get these ideas implemented across the entire sage-grouse range.

In summary, while the future of the greater sage-grouse in Canada remains uncertain, we have enough tools to keep it around for years to come, especially if we are willing to implement them more widely.

What Can You Do?

In contrast to many other species at risk, scientific uncertainty is not a major barrier to recovery efforts for sage-grouse. By and large, we know what to do. Mainly, we just need to scale up and expand on what is already being done. More sage-grouse population augmentation is needed in the short term. In the longer term, more habitat needs to be recovered, either through the voluntary commitment of industry and ranchers or through the establishment of additional protected areas. Above all, awareness and support for this issue needs to be spread. That’s where you come in.

Meaningful action on issues like those faced by the greater sage-grouse are often held up by both government inertia and by land users who lobby against protection. If recovery strategies for the sage-grouse are to be implemented in a meaningful and timely manner, there needs to be public support to kick-start the bureaucratic machine that took over two decades, and several lawsuits, to cobble together a significant response.

Write a letter to the Minister of the Environment or your local Member of Parliament (especially if you live in southern Alberta and Saskatchewan). Support groups such as the Alberta Wilderness Association and Nature Conservancy Canada, who continue to work tirelessly to make sure we don’t lose this eccentric bird. Finally, do your best to reduce your carbon emissions to help slow the changing climate. This will buy time for the sage-grouse to recover, adapt, and relocate as needed. If we want to preserve these unique parts of nature that fill us with laughter and joy, we need to do our part. This fabulous bird may not have another 20 years to wait.

Timothy Shapka is an undergraduate student at the University of Alberta finishing a combined Bachelor of Science and Education program. His love for Albertian wildlife began at his childhood campground, Floating Stone Lake, near his hometown of St. Paul. He fully expects to be an educator in one way or another for his entire life, and hopes to spread awareness of the challenges facing our local species.