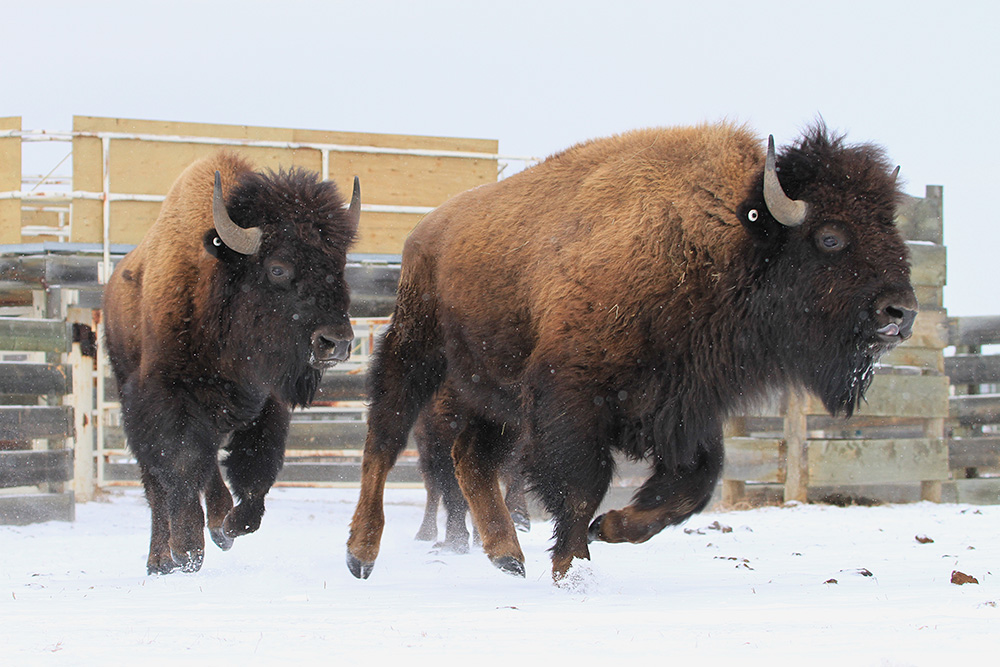 Millions of bison once roamed across the Great Plains of North America, but by the late 1880s they were almost extinct, victims of uncontrolled hunting. Some free-roaming wood bison remained in Alberta’s far north, but the only surviving plains bison were in small captive herds in the United States. One of these captive bison herds was purchased by the Canadian government in the early 1900s and they became the foundation of the plains bison herd that currently exists in Elk Island National Park. In later years, a herd of wood bison from northern Alberta was established in a separate section of the park. These bison herds have prospered and the surplus animals have been used to support bison reintroduction programs across Canada and internationally.

I worked as a National Park Warden for Parks Canada for over three decades, and for the majority of that time, I participated in the reintroduction of plains and wood bison from Elk Island National Park into the wilds of Western Canada. These translocations usually entailed loading a herd of bison into conventional horse or stock trailers. But on three occasions I had the rare opportunity to see bison fly — albeit by airplane and helicopter.

The first aerial translocation was to Siberia in 2006. This adventure began when we received a request for wood bison from a Russian biologist named Sergei Zimov. He was determined to demonstrate that large-bodied herbivores grazing the arctic vegetation could return the ecosystem to the productive state it was in at the end of the Pleistocene. The Russian diamond mining company Alrosa offered the free use of their huge cargo plane, an Ilyushin IL-76, to transport the bison.

Translocating bison to Siberia is not as strange as it may seem. All North American bison evolved from the extinct steppe bison, Bison priscus. The last member of this species trod the grasslands of eastern Siberia around 10,000 years ago. Given that today’s wood bison are the closest living relative of the steppe bison, they were the logical choice for the reintroduction, and the logical place to get them was Elk Island.

I still vividly recall the first shipment. It was 4 a.m on April 5, 2006 when I started my old warden truck. My wife Johane hopped in beside me and in pitch darkness we made our way from our warden station to the wood bison handling facility in Elk Island National Park. It was a surreal feeling, knowing that in just a few hours, I would be sitting in the belly of a Russian cargo plane, inhaling the deep, moist aroma of 30 wood bison as they milled about in three stock trailers beside me. And, after more than 30 hours of non-stop travel, these bison and I would set foot on Russian soil, deep in the heart of Siberia.

Rather than transporting the bison directly to Pleistocene National Park, which is very remote, we brought them to Lenskiye Stolby Nature Park, 100 km south of the city of Yakutsk. In four shipments over the next 14 years, Parks Canada transported a total of 120 young wood bison to this site. The plan is to allow the new herd to grow under careful management and then later begin moving bison to Pleistocene National Park, in the far north, where they will roam freely and contribute to the restoration of the ecosystem.

The return of wood bison to central Alaska, in the spring of 2015, has a convoluted history. Its roots lie in an earlier translocation from Elk Island National Park to the southwest corner of the Yukon, in March 1986. The Yukon bison quickly adapted to and thrived in their new range, but like many new populations, they also began to explore. This eventually got them in trouble when they discovered the roadside grasses along the Alaska Highway. After several vehicle collisions, a decision was made to capture the bison that routinely used the highway and relocate them to the Alaska Wildlife Conservation Center, near Girdwood, Alaska. They remained there, as a captive herd, from 2006 to 2014. At this point, a change of government authorized the shipment of the herd to the vast wilderness of Alaska’s Innoko river drainage area, near the tiny village of Shageluk.

My involvement with the Alaska translocation began during dinner at a bison conference in September 2013. As often happens at such events, a group of strangers settled around a dinner table. Beside me sat a bearded man, burly of build, soft of voice, looking like someone who just put down his chainsaw after cutting and stacking a couple cords of firewood before breakfast. His name was Tom Seaton and he was the biologist responsible for wood bison in Alaska. He was to become a lifelong friend, one Johane and I would spend a month living with in a winter camp in the middle of Alaska, preparing to release a herd of 100 wood bison into the wilderness.

Our chance meeting at that bison conference led to Johane and I heading north to help with the reintroduction. We spent the first week assisting in building the temporary holding pens where the herd would be held prior to release, and moving tonnes of supplies out of the cargo hold of a Hercules C-130 airplane. This plane was then used to haul 100 wood bison, in repurposed shipping containers, from Anchorage to the gravel runway at Shageluk. All went well and the herd was released from its holding pen into the wild in early April 2015.

My third encounter with flying bison involved a reintroduction into Banff National Park in 2017. I still clearly recall the first time I thought about this reintroduction, almost 40 years prior. I was relaxing in my saddle, high on a mountain pass overlooking the Panther River valley, deep in the heart of Banff National Park. It had taken Dave Fanjoy, Cliff White, and me three long days to ride here from the trailhead far to the south. We had stopped for a rest, tuckered out after the last climb up to the pass.

“What do you think, Wes?” asked Cliff. “This valley once had bison grazing those slopes. Do you think we’ll ever see the day when they’ll do so again?” We had seen some circular depressions, saucer-shaped dents in the brown grasses, scattered across a couple meadows on the ride in; these had prompted Cliff’s question.

“No, I doubt it,” I replied. “I mean, where would they even come from?” There had not been a bison hoof on this landscape since before 1880. While the thought was intriguing, it also seemed more like a dream. So we put the question aside and continued our park warden patrol, searching for poachers going after bighorn sheep. Little did I know that almost four decades later, the dream would become a reality, and I would be spending the winter feeding a herd of bison at –45 °C, in the valley below us.

Early the next morning, the five shipping containers holding the bison were flown, one at a time, to a holding pen within the park by a Kamov heavy lift helicopter. Once all five containers, and their precious cargo, were safely in the pen, the doors were opened and for the first time in 140 years, plains bison once again began to leave their impressions on the soil of the Panther River and adjacent meadows.

The Ecological Benefits of Bison Reintroductions

The driving force for the many bison reintroductions undertaken in recent decades has been the re-establishment of critical ecological and cultural roles that bison bring to the landscapes they occupy.

The ecological benefits begin within a few hours of the bison’s arrival at their destination. Bison deposit upwards of 10 to 12 manure patties — patches of highly concentrated nutrients — every day. Each patty can sustain well over 1,000 individual invertebrates, from more than 100 different species, while it exists on the landscape. No other native North American animal can lay claim to such a valuable contribution to the diets of insectivores. Small mammals, birds, amphibians, and reptiles all benefit from the abundance of prey these manure patties provide for. And, like all food webs, the ramifications are huge when the foundations of a healthy ecosystem are functioning as they have for tens of thousands of years.

The benefits don’t stop there. Bison have the second-warmest coat of all North American mammals, second only to qiviut, the underfur of the muskox. The underfur of bison grows in densities of upwards of 18,000 hairs per square inch. This dense mat of winter hair is shed each spring, snagging itself onto everything it bumps up against. And bison do love to rub and wallow, scratching where it itches and leaving scattered clumps of hair over their entire range. These are then gathered by nesting birds and small mammals to be used as nesting material. Its superb warmth and water repellency protect the eggs and hatchlings of countless bird species, newborn baby squirrels, and a host of other species.

In addition to their keystone ecological role, bison play important cultural roles. The Indigenous people of North America have had an intimate relationship with bison since they both walked across Beringia, the land bridge that once connected Eurasia to North America, and continued southward through the ice-free corridor and onto the grasslands of what is now Alberta. Evidence of this was found in Banff National Park, adjacent to Vermilion Lakes, when excavations revealed a campsite that dated back more than 10,000 years. These ancient people probably hunted bison as they followed the edge of the continental glaciers, deep into the heart of Alberta.

Across the historic range of bison, Indigenous people are re-establishing their ancestral cultural connection to bison, to their ceremonies and societies, and through bison, improving their lives, both physically and spiritually.

You can read more about the keystone role of bison in my and Johane’s new book, The Ecological Buffalo: On the Trail of a Keystone Species, published by the University of Regina Press and scheduled to hit bookstore shelves in May 2022.

The 16 bison reintroduced into Banff National Park in the spring of 2017 were initially kept in a large, fenced holding area, allowing them to acclimatize and bond with their new home. It was expected that, after calving there for two seasons, the reintroduction area would form the core of the herd’s range. The herd was released from the holding area in the summer of 2018 and has been free-roaming ever since.

Since their reintroduction, the herd has been doing very well. Last spring, 16 calves were born, bringing the total herd to 66 animals. With the exception of a few dispersing bulls, the herd has remained within the 1,200-km2 reintroduction area centred on the Panther River valley. Low-stress herding is used to keep the herd from straying out of this zone, though this has only been required a dozen times in 2.5 years. The animals are moving among preferred habitat areas and have spent three straight summers using high alpine areas, perhaps to escape bugs and heat or to feed on more nutritious forage.

So far, mortality has not been an issue, as expected with a young herd. Wolves have encountered the bison on several occasions, but have not yet figured out what to do with them. Bison form a core part of the diet of wolves in Wood Buffalo National Park, so the lack of bison predation in Banff is unlikely to last.

Wes Olson has spent almost 40 years working with bison and trying to understand the complexities of bison societies and the keystone roles they provide to the ecosystems they occupy. After 32 years as a National Park Warden, Wes retired and, with his wife Johane Janelle, settled down on an 80-acre parcel of bush and beaver ponds beside Elk Island National Park, where they could be close to bison.