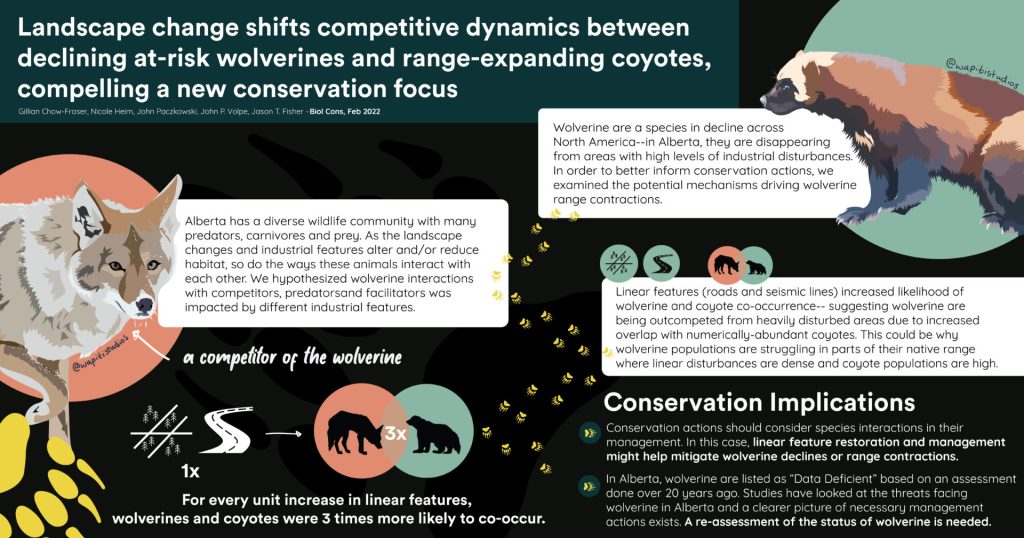 “This is an important finding because wolverines are in decline across North America—in Alberta, they are disappearing from areas with high levels of industrial disturbance. Our study suggests wolverine are being outcompeted from disturbed areas because of this increased overlap with coyotes,” says Gillian Chow-Fraser, the lead researcher from the study.

“We definitely need to start taking the status of wolverines more seriously.” Gillian stated in her interview with CBC.

Are wolverines and coyotes really fighting each other for space? Though not the typical sense of the word “competition”, we emphasize this is a form of competition where numerically abundant coyotes “outcompete” wolverines from places with high densities of linear disturbances because there is simply a much higher number of coyotes there that displace wolverines. “This would help explain why wolverine populations are struggling in parts of their native range where linear disturbances are rampant and coyote populations are high,” explains Chow-Fraser.

This work should help inform conservation actions for wolverines, a species at risk, but also encourage wildlife research to look at interactions between species to solve conservation issues. “The big picture is that we’ve shown one example of how landscape change can indirectly affect competition to the detriment of species that cannot adapt to disturbances,” says Dr. Jason Fisher, principal investigator of the work. “Hopefully this motivates much-needed coordinated landscape management, and restoration, in the Rockies’ vulnerable East Slopes.”

Under Alberta’s Wildlife Act, wolverine are listed as “Data Deficient” based on an assessment done over 20 years ago. Since then, many studies have looked at the threats facing wolverine in the province and a clearer picture of necessary management actions exists today. The researchers strongly encourage a re-assessment of the status of wolverine in Alberta.

This article was originally posted on CPAWS NA website here.