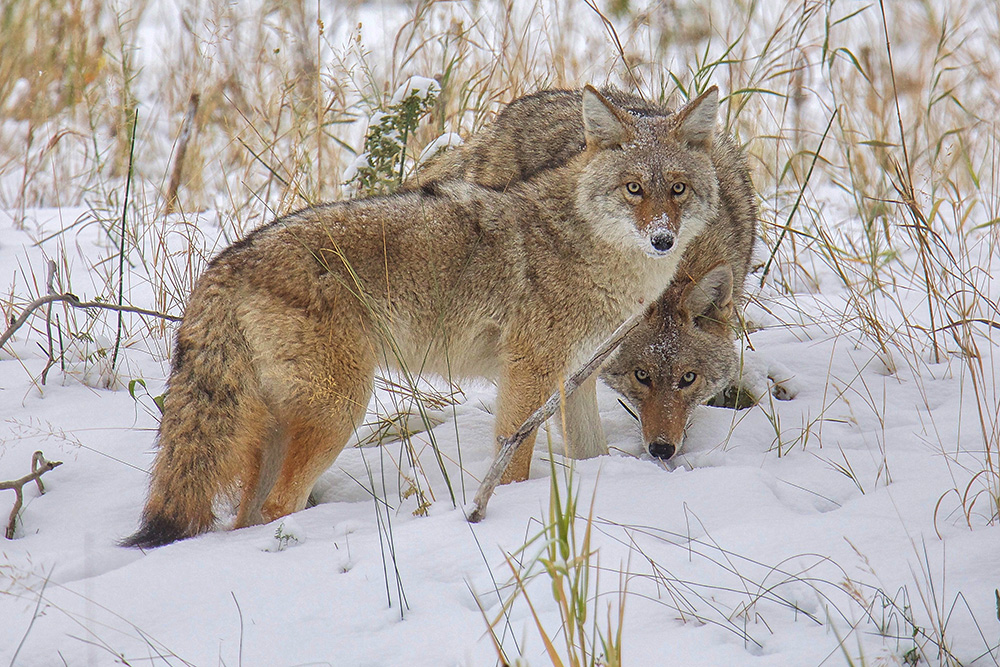 Two coyotes at home in one of Calgary's natural areas. TONY LE PRIEUR

I’ve heard many opinions about urban coyotes. “They don’t belong here! Can’t the government move them somewhere else?” “They have a right to exist and we’ve invaded their space.” “They make me afraid for my kids and myself, just walking down my own front street.” “I love seeing coyotes and have never had a negative experience with one.” These kinds of sentiments about coyotes come via emails, conversations, radio call-in shows, and posts to the website of the Edmonton Urban Coyote Project (edmontonurbancoyotes.ca).

I began studying urban coyotes a little over a decade ago because Alberta’s cities, like virtually every city in North America, have seen a steady increase in reports of urban coyotes over time. This is likely the result of cities expanding into rural areas and coyotes expanding their range over the past many decades.

My goal was to understand how coyotes make a living in cities and to identify the factors that are associated with conflict. I hoped this information would facilitate coexistence between people and coyotes to increase security for people while supporting the many ecological and aesthetic benefits coyotes bring to cities. The associated research has been a collaborative effort with wonderful participation from academic colleagues, civic officials, a private company, citizens, and, especially, several graduate and undergraduate students in my lab at the University of Alberta.

What I’ve concluded over the past ten years is that there are four broad components to reducing conflict: (1) remove or secure attractants, (2) control and protect pets, (3) increase wariness of bold coyotes, and (4) prevent denning in residential areas. None of these recommendations is unique to Alberta’s cities or the studies in my lab. But we’ve uncovered some details that help us stay a step ahead of wily coyotes, which have shared space with people for millennia and are extremely good at adapting to, and then exploiting, our human habits. I use these terms—adapt and exploit—in a neutral way. Coyotes are among the handful of species that thrive in cities, in contrast to most other species, which avoid urban areas or face local extinctions.

Before sharing some of the details of what we’ve learned, I think it’s important to acknowledge some characteristics of urban coyotes that are relevant to successfully coexisting with them. Relative to surrounding rural areas, coyotes frequently reach higher population densities in cities because of earlier breeding, larger litters, and higher survival of pups. In addition, urban pups are slower to disperse, which results in large family groups of adult-looking animals. Their urban diets are more diverse than in rural areas and they readily make use of buildings and other infrastructure as den sites. Coyotes that would not survive or reproduce without human sources of food and shelter are able to do so in cities. The food subsidy is usually the root of subsequent problems with conflict, which often involves den sites in residential areas.

In Edmonton, it is increasingly common for coyotes to den in derelict sheds or under decks and sunrooms. Last spring, we discovered nine pups in such a location, birthed by a small, apparently lone female. She likely sought this denning location, which required Houdini-like contortions while crawling under a fence to access, mainly for its security from other, more dominant coyotes. The large size of her litter (five to six is average) probably meant she had access to high-calorie human food, such as garbage, but there was no such food source immediately around the den site.

What kind of food could a meek but wily coyote like this one find nearby? There are many surprising sources. Work in my lab, led by Maureen Murray and Deanna Steckler, showed that urban coyotes eat rodents, rabbits, insects, and berries, as expected. But they also eat birdseed, fruit (of both native and domestic species), pet food, compost, and all manner of garbage, ranging from a leather glove to an entire wrapped burrito. Several people have shared stories and photos of coyotes climbing crabapple trees to eat the apples!

Sometimes people provide food to coyotes and other wildlife intentionally. This has motivated a proposed and very welcome bylaw amendment in Edmonton to prohibit feeding of wildlife except for conventional, suspended bird feeders. Over the years, every single time I’ve investigated clusters of complaints about aggressive coyotes, I have found evidence of access to human sources of food. Feeding was associated with the lethal attack on a 110-pound dog in Edmonton and severe bites to the head of a toddler in Burnaby. Repeated access to human sources of food produces food conditioning: the association animals make between people and food. It consistently generates conflict, whether with coyotes, wolves, bears, or geese.

For wildlife professionals tasked with managing urban wildlife, the presence of coyotes, even in residential areas, does not automatically signal conflict. Conflict requiring intervention occurs only when people or their pets are directly threatened by coyotes with aggressive and repeated approaches. This behaviour is almost always accompanied by food conditioning and/or the presence of a den site, both of which increase defensive behaviour toward pets and sometimes people. Thus, key actions for minimizing conflict are: securing or removing attractants, preventing food conditioning, controlling or containing pets, and preventing establishment of den sites in residential areas.

Many of the coyotes that use residential areas are young, dispersing animals and first-time breeders that are excluded from natural areas by larger, more dominant coyotes. Murray’s work showed that animals suffering from mange (a skin parasite) are more likely to use residential areas, particularly during the day. She also identified the characteristics of residential yards that are most likely to attract coyotes. These include the lack of a fence, presence of hiding cover (dense vegetation, sheds, old cars, piles of debris), and food sources. Mangy animals were much more likely than healthy coyotes to shelter under decks and beside house foundations. In a nasty feedback loop, eating human-sourced food, especially compost containing mycotoxins, can result in immune suppression, which increases susceptibility to parasites and disease. Another student, Scott Sugden, showed that animals in poor condition exhibit disrupted microbiomes in their intestines, which appear to stem from protein-poor diets.

Beyond the conflict associated with coyote behaviour, a new parasite makes it more important to deter coyotes from residential yards and similar human-use areas like playgrounds and community gardens. The tapeworm parasite Echinococcus multilocularis has been known for decades to infect coyotes, but a new, more virulent strain has arrived from Europe, probably with imported dogs, only in the last decade or so. This parasite usually cycles between coyotes and their rodent prey, but humans can be infected if they accidentally eat the microscopic eggs deposited with coyote feces. Since 2013, 17 Albertans have been diagnosed, but the infected number may be much higher because symptoms, related to liver cysts, can take 10 to 15 years to develop.

Because the rates and severity of conflicts with coyotes has been rising in residential areas, grad student Gabrielle Lajeunesse and I are initiating a community-based aversive conditioning program for residential neighbourhoods. We are investigating whether intensive and repeated frightening encounters with trained volunteers can teach coyotes to be generally more wary of people, thereby reducing the likelihood of encounters and conflicts. By designating both treatment and control neighbourhoods, we will later be able to assess the effects of the hazing program.

In both neighbourhood types, volunteers will conduct patrols, assess coyote wariness, and follow up on complaints by residents. In treatment neighbourhoods, volunteers will react to coyotes that permit close approaches (i.e., that are habituated to people) by chasing them while throwing tennis balls, shaking a can full of coins, and shouting. Similar but more intensive forms of aversive conditioning are already used in Edmonton and Calgary by city wildlife professionals and have been used successfully to manage bears in protected areas for a couple of decades. We hope our community-based aversive conditioning program will complement current approaches by increasing  the frequency and immediacy of negative experiences for coyotes encountering people in residential areas.

If we are successful at deterring coyotes from residential areas, it becomes that much more important to support coexistence in natural areas, where most people prefer our urban coyotes to reside. This means restricting off-leash dogs to designated areas where coyotes learn to expect them, to maintain control of dogs even in off-leash areas, to know how to deter an approaching coyote, and to respect park closures associated with den sites.

This attitude of personal responsibility is similar to the expectations for recreating in natural areas outside of cities and is an essential part of fostering biodiversity in cities in general. Such attitudes support the ecosystem services that natural areas provide, including their restorative effects on people. Coyotes provide ecosystem services too, such as the regulation of rodents and hares, dispersal of plant seeds and pits, scavenging of carrion, and the aesthetic pleasure many people enjoy from seeing coyotes in natural areas.

If you would like to know more about the work my students and I have done on urban coyotes, I invite you to visit our website at edmontonurbancoyotes.ca, where you’ll find some tips on avoiding conflict with coyotes, more information about current research, including the community-based aversive conditioning program, and links to publications from past research. An Internet search for “Echinococcus multilocularis Alberta” will provide information and advice from health professionals about this parasite. Finally, I invite your questions and ideas for coexisting with urban coyotes via email at coyotes@ualberta.ca.

Colleen Cassady St. Clair is a professor of Biological Sciences at the University of Alberta.The Edmonton Urban Coyote Project has garnered national attention from
the CBC (bit.ly/cbc-coyote) and a light-hearted look from The Beaverton
(bit.ly/beaverton-coyote). 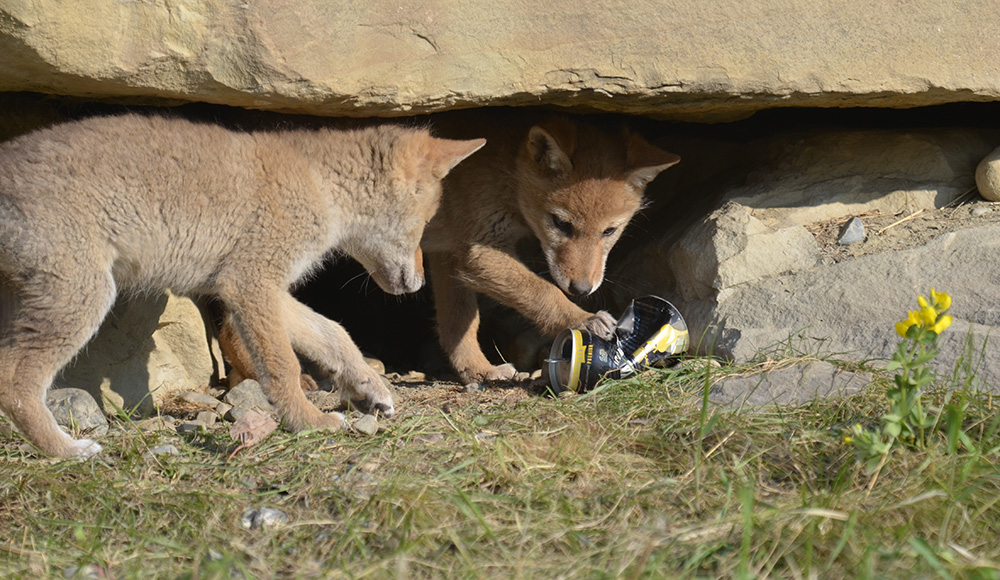