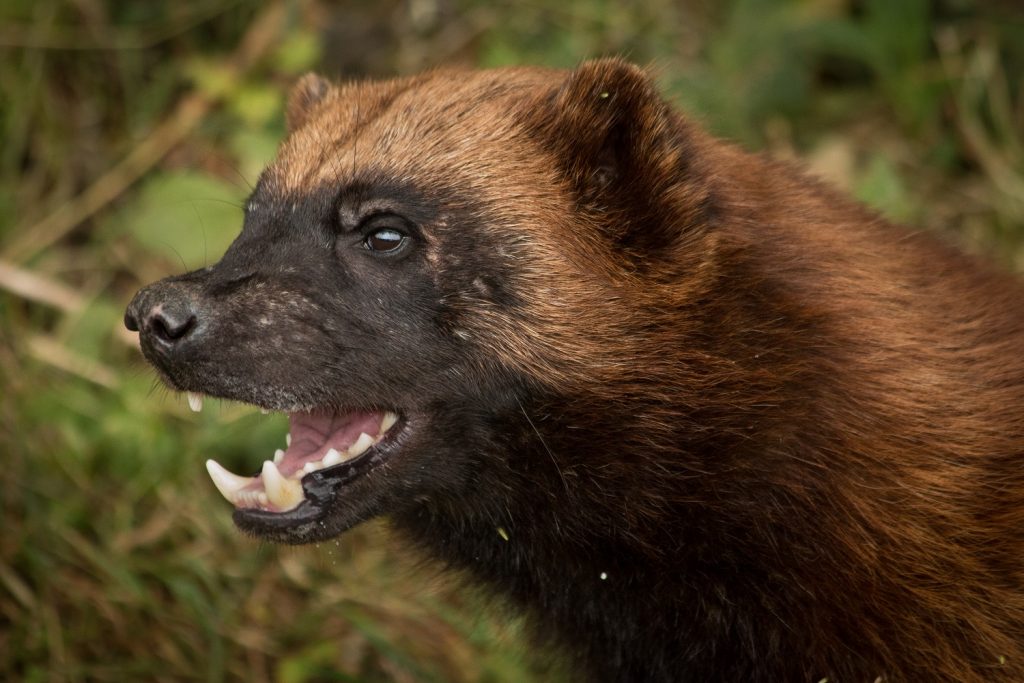 Olaus Murie once wrote, “I wonder if there is another inhabitant of northern wilderness that so excites the imagination.”1 The species he was referring to? None other than the wolverine.

More than 60 years later, the same thought ran through my mind as I tracked through the foothills of Alberta’s Rocky Mountains. Would this be the day? Would I be able to catch even a brief glimpse of a wolverine's bushy tail in the distance?

I was out in the field to help with a research program monitoring wildlife in the Rockies. The program was designed to collect data on a wide variety of species, but a potential wolverine sighting was at the top of my “most anticipated moment” list.

As I moved from sites in the foothills to higher-altitude areas in the mountains, I imagined spotting a dark blur on the top of the mountainous scree. It would likely take a second to figure out exactly what I was looking at. Then, with a gasp, I would realize it was, in fact, the “lifer” at the top of my list.

Unfortunately, my dream of encountering a wolverine did not materialize that day. Though I was not surprised. Wolverines are known for being elusive, with naturally low densities and massive home ranges. So the chances of crossing paths with one are extremely low. On top of that, the Eastern Slopes have changed dramatically over the past century. The intact rolling forests that once characterized this region have been fragmented and transformed by industrial activities and roads, all to the detriment of the wolverine. As a result, the range of the wolverine has been contracting in southern areas, reducing my chances of ever seeing one in the wild.

Getting to Know the Wolverine

Wolverines have inspired and thrilled backcountry enthusiasts for ages. They are secretive and tough, short but fierce. Some have described them as “skunk bears,” but they are actually the largest terrestrial member of the weasel family (Mustelidae). The likeness to a skunk comes from the two characteristic stripes running down their backs leading to a thick tail, while the likeness to a bear comes from their stocky frame — adult males weigh 13–18 kg, females 7.5–12.5 kg.

As large-bodied carnivores, they prey on small mammals such as snowshoe hares and rodents. But they are also effective scavengers of much larger animals, such as moose and caribou.

Wolverines are found in forested, alpine, and tundra ecosystems. A key requirement is snow, and lots of it. Females den in snow-covered areas where they give birth to their kits — on average, two kits per litter — and they also require snow for food storage. An example of an intact foothills landscape; all too rare in Alberta’s Eastern Slopes.. GILLIAN CHOW-FRASER

Wolverines have extremely large territories. The home range of a female wolverine can be between 50 to 400 km2, but nearly five times that for males, whose ranges can vary between 230 to 1,580 km2. With some overlap in home ranges, wolverines exist at quite low densities with only five to ten individuals per 1,000 km2.

Their dependence on vast, connected wilderness makes them a useful indicator for ecosystem health and biodiversity. It is suggested the wolverines need intact spaces as large as 20,000 km2 to maintain a secure population.2 This would be about four times the size of Willmore Wilderness Park.

The wolverine’s historical range extended across the boreal, Arctic, and mountainous regions of the Northern Hemisphere. Sadly, wolverines have lost considerable portions of their range in North America and are now only found in about 40% of their historical range.3 Across Canada, whole wolverine subpopulations have been lost from New Brunswick and southern Ontario, and from parts of Manitoba, Saskatchewan and Alberta. However, some subpopulations appear to be increasing, primarily in the northern regions, such as the Northwest Territories and northern Ontario.

In Alberta, wolverines were once found across the province but are now relegated to the northern boreal forest and the mountains and foothills of the Rockies. A decades-old provincial estimate states there are likely fewer than 1,000 wolverines left in the province.4 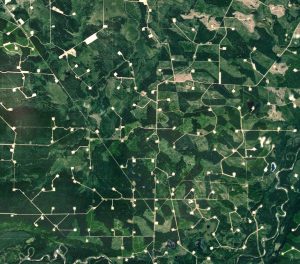 A heavily impacted foothills landscape north of Hinton. The abundance of wolverines is reduced in disturbed landscapes like this one. GOOGLE MAPS

Research suggests that wolverine declines are the result of several factors working in combination:

Researchers believe that the implications of these factors can still be better understood and efforts are underway to fill in the missing pieces. 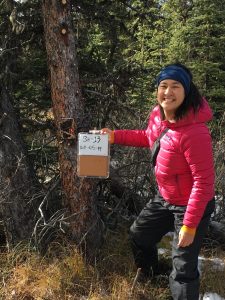 Compared to many other species at risk, gathering data on wolverines is very difficult. They exist in sparse numbers and are extremely elusive. Historical estimates are largely based on trapping records, which do not always reflect true abundance. Trapping efforts can vary year-to-year and it is nearly impossible to account for the level of unreported harvest. This is why researchers have become creative in their monitoring techniques.

My colleagues and I have relied heavily on motion-triggered cameras placed throughout the wolverine’s range in the Alberta’s Eastern Slopes. Hundreds of cameras have been deployed over the years, addressing monitoring gaps in different areas and chipping away at the puzzle of why wolverines are disappearing from the foothills.

But what is it about highly developed areas that is so unappealing to wolverines? What is driving them away? As an eager grad student, this is the piece of the puzzle that I chose to tackle. I addressed this gap in knowledge by combining all the data we had, from the Willmore Wilderness Park down to Kananaskis. Coyote range has been expanding as a result of human development in the boreal forest. Competition with coyotes has been a significant factor in the decline of wolverines. TONY LEPRIEUR

It was already known that wolverines are affected by the presence of other carnivores. As a scavenger, wolverines must compete with other carnivores to find resources, like carcasses, and monopolize their finds. Knowing that the diverse mammal community in the Rockies responded differently to landscape change, I tested to see if competitive pressures between wolverines and other carnivores were impacted by development.

My research revealed one particular culprit: the coyote. Coyotes have been expanding their range in North America and they generally respond positively to human development. Development brings in more coyotes, which means more overlap with wolverines. I found that for every unit increase in industrial features, wolverines and coyotes are three times more likely to co-occur.6 It is reasonable to conclude that increased competition with coyotes is part of the reason why wolverines decline in the face of development.

Despite all this recent research and significant advances in understanding wolverine ecology, Alberta does not currently provide protection for wolverines. In fact, trapping of wolverines is still allowed. A status assessment was produced in 2000; however, wolverines are still classified by the Alberta government as “Data Deficient” rather than classified as a species at risk. Compare this to how the federal government views wolverines: they were first listed as “Special Concern” (a level below “Threatened”) in 1982, a designation the species still holds today. A wolverine photographed using a remote camera. Wolverines are enticed to visit the camera location using bait affixed to a tree. ALBERTA ENVIRONMENT AND PARKS

The classification of “Data Deficient” is only supposed to be used when the available data are insufficient to determine the degree of threat faced by the species. But it seems clear to me that, given all the research done over the past 20 years, the threats are sufficiently clear. And there is certainly no doubt about the contraction of the wolverine’s range across all of Alberta — a hallmark for identifying species at risk.

Perhaps the Alberta government is reluctant to list the wolverine because only southern populations are in decline and northern populations appear stable. However, a range contraction of any degree is evidence of a significant threat to the species. It indicates a local decline in abundance, which reduces the population’s chance of persistence. It also points to a potential loss of genetic diversity because wolverines living in the foothills and mountains likely carry unique genetic adaptations not found in the northern populations. This means the impact of range contraction in the Rockies is more than a loss of numbers.

I believe the available evidence is sufficient to warrant immediate protective measures for the southern wolverine population. I fear that while we wait to gather more data, wolverines will continue to experience mounting pressures from industrial development and continue to decline. Let’s not forget about the government’s recent proposal to expand mining in the Eastern Slopes. A lack of complete data should no longer be an excuse for inaction. Wolverines are the largest terrestrial member of the weasel family, weighing up to 18 kg. MAIA C.

A Call on Alberta to Protect These Wilderness Icons

I believe Alberta has a responsibility to conserve wolverines throughout their historical range. If you share my concerns, I encourage you to send a message to the Minister of the Environment (aep.minister@gov.ab.ca) and tell him to re-assess the protective status of the wolverine in Alberta. It should be emphasized that:

My thoughts return to Murie’s sentimental words about wolverines exciting the imagination. These days, instead of picturing an amazing encounter with a wolverine in the mountains, I am a little more sombre. I wonder if in 50 years, some young woman will have those same wistful thoughts about spotting a wolverine, or if her thoughts will be of a different kind. Will she instead wonder why no one did anything as wolverine disappeared from the mountains? I try not to dwell on those thoughts. Instead, I think of all the passionate and dedicated people that care so much about Alberta’s wildlife. And I know that they will not let wolverines become another bygone beast.

Gillian Chow-Fraser is a Director-At-Large with Nature Alberta. She is also the Boreal Program Manager at the Canadian Parks and Wilderness Society (CPAWS) Northern Alberta where she leads on conservation work in the boreal forests of Alberta to protect their wilderness and the wildlife that depend on it.