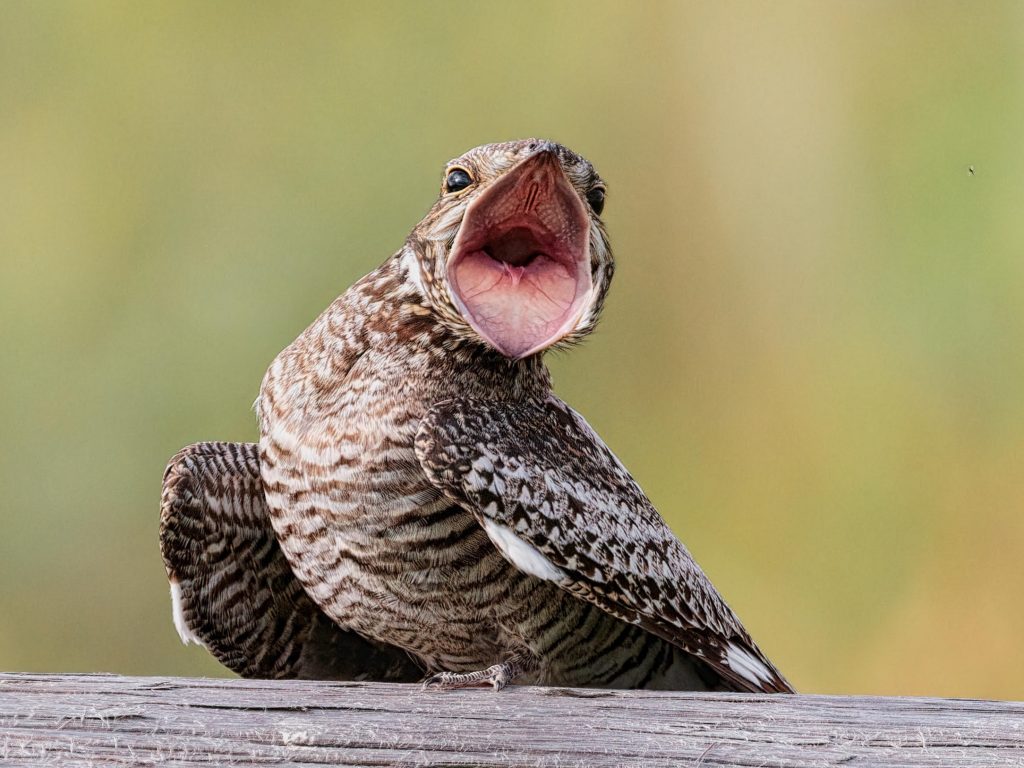 By Doris May and Steph Weizenbach

BOOM! The first time I heard this loud, unnerving sound, it reverberated through the ravine where my prairie home lies nestled along a meandering creek. The sound was ominous, like a sound effect you might expect in a tense scene from a Jurassic Park movie. I was even more alarmed when I saw the reaction of our small flock of sheep, who were frozen in place with their heads fixated in the direction of the sound. They looked as startled as I felt. For years, I heard this mysterious sound on midsummer eves, without any visual clues as to the source.

Decades later, I finally solved this spooky mystery while hiking through a riparian woodland, following a game trail to higher ground. I was abruptly stopped in my tracks by a tremendous BOOM just above my head. I recognized that unmistakable sound, closer than ever. My heart raced but I gathered my nerve and carried on to find the mysterious culprit perched on a branch of a coniferous tree. I immediately recognized it as a common nighthawk. 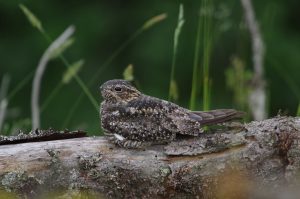 At first glance, the common nighthawk is an unremarkable, mottled brown bird, but your jaw will drop when you uncover their extraordinary adaptations. DORIS MAY

The common nighthawk is an extraordinary bird. At first glance, it looks like an unremarkable, mottled brown bird with a tiny beak. But if you are lucky enough to see it open its mouth, your jaw will drop almost as far as this bird’s beak can open. Its enormous gape serves as an adaptation for catching bugs in flight. Its wide mouth is surrounded by bristles that help knock flying insects into its wide sweeping face. Its face effectively turns into a bug net while it feeds on the wing at dusk and at dawn. It also sports a set of wide eyes that help it spot moths, mayflies, grasshoppers, beetles, wasps, and caddisflies in low light. Sometimes it can be seen feeding on clouds of insects attracted to bright lights in urban environments. The nighthawk’s jerky flight resembles a bat in flight more than a typical bird, although it is easily distinguished from below by bright white patches on its long, pointed wings.

The mystery sound the nighthawk makes does not, as you might expect, come from its gaping mouth. It’s actually a type of “sonic boom” made by male birds to impress the ladies during a daredevil stunt. In the middle of a feeding sweep, the male will suddenly plunge to the ground, swinging back up at the last moment for a dramatic finish. The impressive sound is created by air rushing through the bird’s feathers as the wings sweep into a braking position. Recent research in Alberta has determined that this wing boom marks the nighthawk’s exclusive territory.1 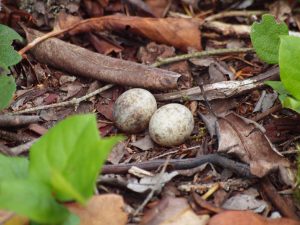 Another bizarre behaviour of the common nighthawk involves nesting. Rather than hiding their nests or making them inaccessible like most birds, nighthawks typically lay two eggs on a bare patch of ground. I was lucky to find a nest site close to the game trail I followed that fateful day when I solved my decades-old mystery. Curiosity brought me back to the area and my heart raced once again when I spotted a nighthawk on the ground with her mouth gaping widely open, hissing at me, performing the injured wing act. I knew there was a nest nearby. I carefully tiptoed around and spotted two creamy white, lightly speckled eggs on a bare spot of ground.

Common nighthawks incubate their eggs for 19 days before semi-precocial, downy nestlings hatch. The awkward fluffballs are tended by both parents with the female keeping them warm and the male bringing food. They fledge and attempt short flights at 23 days and become entirely independent by 30 days old. What an incredible transformation! 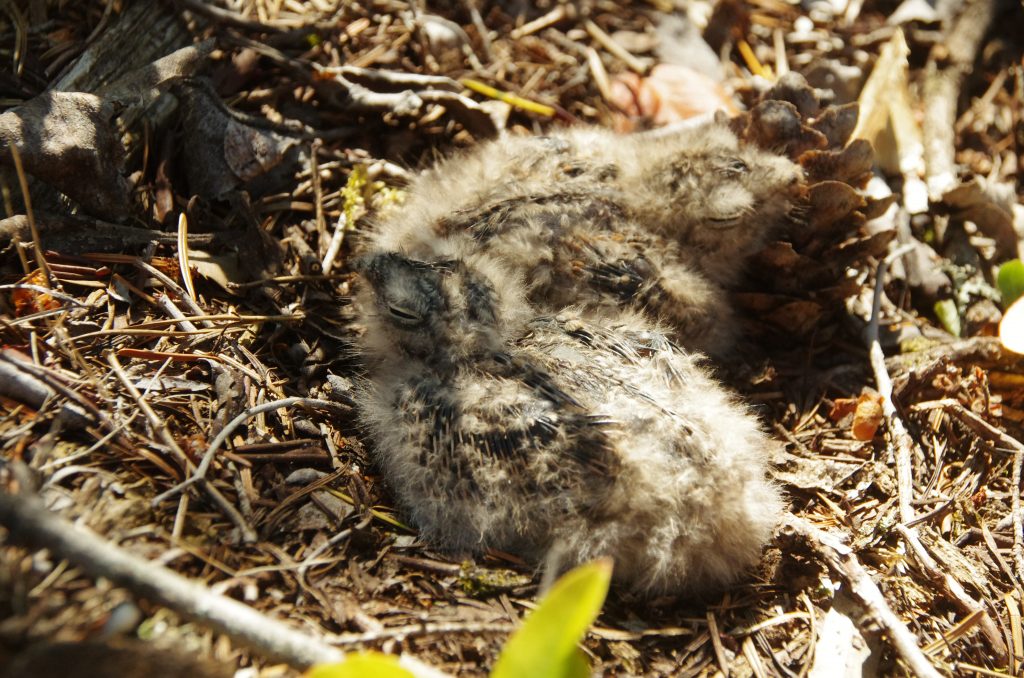 Nighthawk nestlings hatch semi-precocial (capable of some independent activity), sparsely covered in down, with their eyes open. DORIS MAY

Fully feathered fledglings with mom, ready to leave the nest at just over three weeks of age. It takes them one week to learn how to fly and catch their own food. DORIS MAY

I was very careful not to disturb the eggs and only stayed in the area long enough to snap a couple photos. I return to the area each year and found a nest in the exact same location four years in a row. Over a three-year span, I photographed the full life cycle. I found the nest disturbed in the fourth year, with one egg gone and the other egg several feet away, broken. I still hear them every year, but they have relocated to a different nesting spot.

Common nighthawks are listed as Threatened under the federal Species at Risk Act. The Atlas of Breeding Birds of Alberta: A Second Look reported a decline in nighthawk abundance in Alberta,2 which is consistent with declines in abundance across Canada reported by the Breeding Bird Survey. Their decline has been associated with habitat loss, reduced food availability because of increasing pesticide use, and increased predation.

Additional information on nighthawk distribution, abundance, and population trends is needed to support conservation efforts. If you have good hearing, a vehicle, and an inclination to wake up before the sun rises, you can participate in the Canadian Nightjar Survey in Alberta. Nightjar surveyors are assigned a route where you listen carefully for the common nighthawk’s “peent” call. This is a very distinctive call that a novice birder can quickly learn by listening to recordings online. Your survey begins 30 minutes before sunrise and can be done any day between June 15 and July 15. At each of the 12 roadside stops, you quietly listen for the telltale “peent” call. Visit naturealberta.ca/citizen-science to learn more about contributing important data to conserve this amazing, jaw-dropping species. 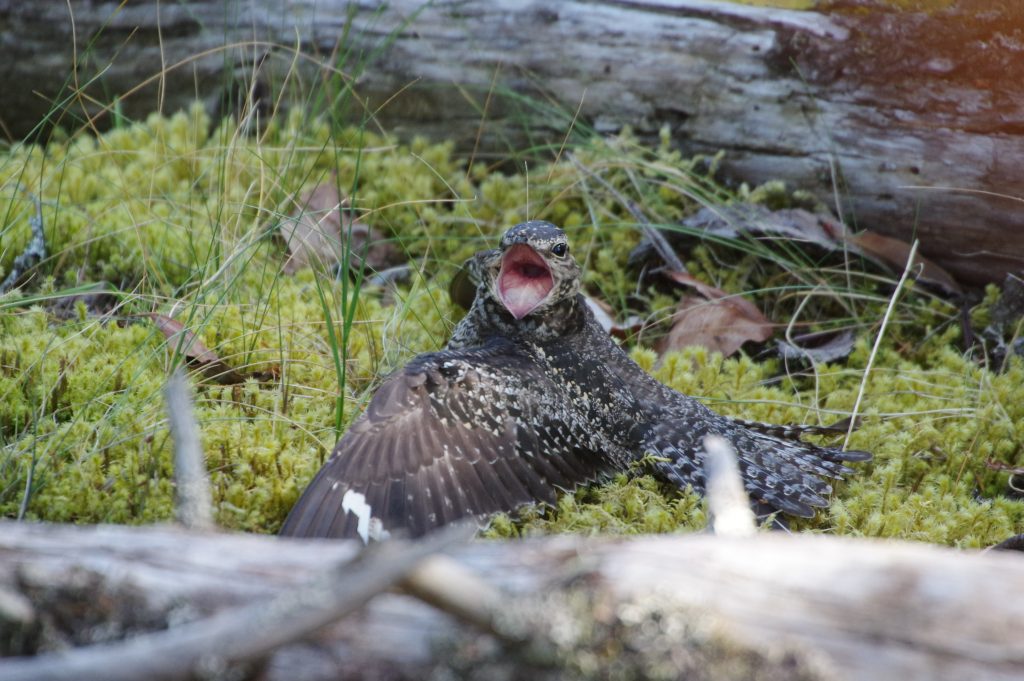 Common nighthawk performing a diversion by opening its wide gape, hissing, spreading its wings out, and hopping around to lure me away from its nest. DORIS MAY

Doris May is a lifelong amateur nature photographer and naturalist who inspired her daughter, Steph Weizenbach, to pursue a degree and career in Conservation Biology. Steph is the Program Director for Nature Alberta.