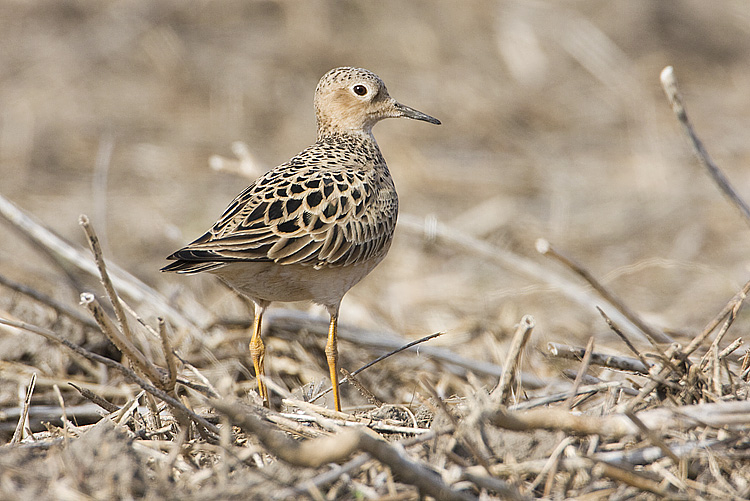 Ecosystems change over time without any tampering by humankind. Human impacts, however, have caused massive changes over a short period of time that have resulted in serious environmental concerns, including loss of biodiversity.1 We are all aware of the global issues of habitat loss and wildlife extinction around the world, which call for intervention and leadership from governments, academics, and researchers. However, we do not need to look so far as the destruction of tropical forests of Brazil or Borneo; we can see these issues right here in Alberta.

Anyone who has lived in Alberta for 50 years or so will have witnessed extensive declines in biodiversity and abundance of wildlife in our province. I came to Alberta in 1964 and was only away for a short interval (1972–1974) to complete my PhD in Toronto. My five-plus decades in central Alberta gave me ample opportunities to explore the outdoors in and around the Edmonton area. I have witnessed great changes. Some of the declines I have observed over the years are deeply troubling.

Younger people who have not experienced the abundance of yesteryear generally tend to be accepting of what we have today. The new normal is, quite simply, normal. If one does not know what was, one has no reason to fret over what is. This continual resetting of what is considered normal is known as benchmark shifting, or a shifting baseline, as coined by Daniel Pauly in 1995.2 Even some veteran biologists are inclined to accept these changes. Many accomplished biologists (who inspire generations of students), and some nature enthusiasts, consider Aldo Leopold, the widely respected icon of conservation, to have been “off-track” when he mused about valuing pristine wilderness settings. They feel that advocacy detracts from their enjoyment of that nature which remains. I am of a decidedly different opinion.

In the 1960s, spring was a time when every large waterbody around Edmonton was teeming with waterfowl and a multitude of other aquatic birds. Urban sprawl has destroyed much of that. Great blue herons once nested near the town of Tofield, but no longer. At Beaverhill Lake (itself mostly gone), eared grebes would breed in huge colonies, and shorebirds filled the sky in May and then again in mid- to late summer. Buff-breasted sandpipers were common every spring at the south end of the lake; I remember marveling at the courtship display of these colorful little birds. But no longer. Buff-breasted sandpipers now only make a rare appearance in the Edmonton area while migrating to their arctic breeding grounds. This species is threatened worldwide and could soon join the passenger pigeon on the extinct list. 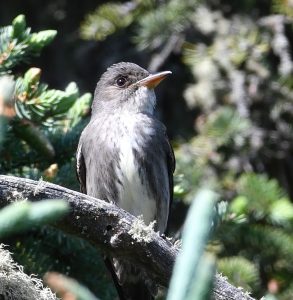 Olive-sided flycatchers were once common in the boreal forests. Numbers have plummeted since 1976, when the first May Species Count took place. The Committee on the Status of Endangered Wildlife in Canada (COSEWIC) lists the species as Threatened. LU CARBYN

Olive-sided flycatcher, rusty blackbird, and common nighthawk numbers have plummeted to near extinction in central Alberta. Local birding experts say they used to see flocks of migrating snow buntings numbering half a million or so winging their way to their arctic breeding grounds; now these experts say they are lucky if they see a thousand. Annual Christmas Bird Counts have recorded a 64% decline in snow buntings over 40 years.

Some 44% of migratory bird species that breed in the boreal forests, and winter in South America, have experienced declines in numbers.3,4 The thick-billed longspur is down by 90% from its 1996 numbers in Alberta’s mixed grass ecosystems.5 Some species that nest in the mixed grasslands of the Canadian prairies have undergone even greater losses in the last 40 years. To quote retired Alberta Fish and Wildlife biologist Lorne Fitch, “yesterday’s abundant species can become tomorrow’s imperiled ones.” We have refused an ounce of prevention and now the situation calls for well more than a pound of cure, as we struggle with recovery efforts of endangered species.

Sharp-tailed grouse were once found throughout Alberta. They have become almost extirpated (a few seen here and there) in vast areas of the central portion of the province, resulting in recent hunting closures in some regions. My wife and I took our grandchildren on a trip some time ago to Wainwright, where we watched sharp-tailed grouse at a lek. My grandkids got to witness something that most modern kids never will. The distribution of this grouse species has been relegated, by default, to southern and northern corners of the province, where it is able to survive, well away from intensive industrial agricultural practices.

Agricultural areas have been heavily impacted through large-scale industrial farming. Modern agricultural chemicals (especially neonicotinoids) further impact survival of grouse and many other bird (especially shorebird) and invertebrate species. Grouse still existing on private lands are more vulnerable to habitat losses than those on public lands. Traditional farming practices had been much more favourable to these birds. In previous decades, small fields with cover along fence lines, hedges, copses of woodlands, and wetlands provided habitat. Barn swallows once nested in buildings on every family farm, but these have been mostly taken over by commercial farming operations. 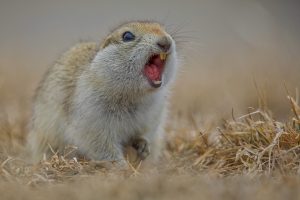 Richardson’s ground squirrels have undergone massive reductions in both numbers and distribution in central Alberta, resulting in the loss of an important prey species for a number predators. Modern agricultural practices have been the major reason for these declines. TONY LEPRIEUR

Drive in any direction from Edmonton and you are unlikely to find the once ubiquitous Richardson’s ground squirrel, a.k.a. gophers. Until recently you could walk into almost any county administrative office and be eagerly provided with strychnine to exterminate ground squirrels. I understand that rodents can be a headache for rural residents, particularly at high densities, and we cannot always be protectionist in all places and at all times. However, should there not be limits to large-scale use of poisons, shooting, drowning, and habitat destruction of these animals? A question frequently asked by those who destroy the archaically designated “vermin” is, “Why not kill them all?” Hardy Pletz, a longtime hawk specialist, can explain the consequences. He used to see dozens of nesting pairs of red-tailed hawks while driving from Edmonton to Wetaskiwin; now he claims to be lucky to see one or two individuals. One rarely sees a long-tailed weasel in agricultural areas anymore. Gophers are at the base of the food chain for many other avian and mammalian predators, and that makes them an important element in healthy ecosystems.

In contrast, introduced, opportunistic birds have increased in numbers, which is another outcome of the new-normal paradigm. These species include urbanized crows, ravens, and seagulls, and European introduced species, such as Eurasian collared doves, starlings, and house sparrows.

Lest I risk losing you to despair, I must identify some positive stories as well. Given all the damage that has been done over the years, habitat restoration, along with habitat protection, is critical. Groups like Ducks Unlimited have been at the forefront of habitat restoration efforts. Since 1938, Ducks Unlimited has been working with landowners to restore wetlands across Canada. It is no coincidence that waterfowl are one of the few groups of birds that have shown increasing population trends (after initial major declines) over the past 50 years. Driving these efforts is the duck-hunting community, whose financial support for conservation is unparalleled. It makes me wonder what could be accomplished if we could harness similar levels of financial and political support for conservation from the birdwatching community. 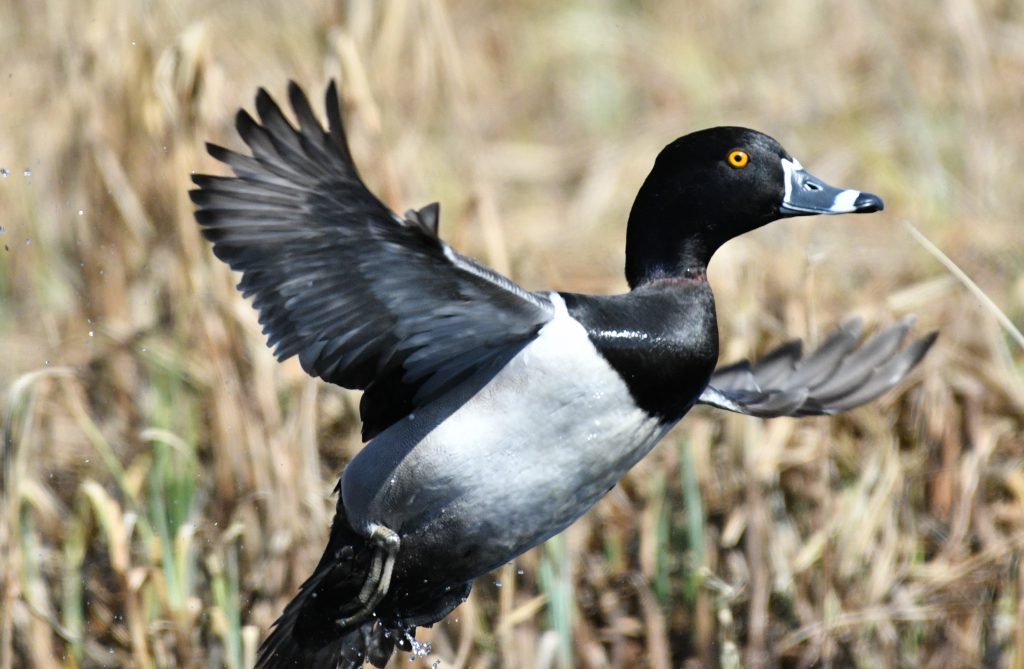 Despite losses of wetlands, some duck numbers, such as the ring-necked duck, have increased. Ducks Unlimited has been effective in promoting waterfowl conservation in western Canada. LU CARBYN

We also need to redouble efforts to directly support species, especially those that are threatened. In past decades, we’ve had great success in reintroducing species that had been lost from Alberta, such as the swift fox and peregrine falcon. Such conservation efforts are critical, and the public should be demanding that they occur, because some species recovery efforts at the provincial level, woodland caribou for example, have waned over the years.

The recent creation of several new parks adjacent to Wood Buffalo National Park, resulting in the world’s largest boreal protected area, is something to be celebrated. Will these areas be protected from logging in the future? Habitat protection in the grasslands and parkland regions is much more challenging because most of the land is privately owned.6 Here, the efforts of the Nature Conservancy and other land trusts have been invaluable and need to be supported. Each year, these groups protect a bit more of our prairie landscapes through landowner bequests, conservation easements, and land purchases.

It was heartening to see tens of thousands of Albertans write to the UCP government last year, opposing ill-conceived plans to allow coal mining in previously protected parts of the Eastern Slopes and to remove parks from the provincial parks system. The protection of biodiversity requires proactive management and must be a top-of-mind issue all the time, not just when a crisis arises. Maintaining public support for biodiversity conservation is critical.

In my opinion, leaders in today’s academic community are often disinclined to step out of the comfort zones of peer recognition, citation indices, and high-profile, high-dollar research grants. Instead of emphasizing rapid fibre production in forests, tree genetics, and high-yield silviculture practices in order to squeeze every possible dollar out of our natural resources, university departments need to motivate the next generation to have a more balanced approach to resource management.

There are some good initiatives in place. For example, the Ecosystem Management Emulating Natural Disturbance (EMEND) Project is a large-scale, variable retention harvest experiment designed to test effects of residual forest structure on ecosystem integrity and forest regeneration. It is a long-term project that began in 1998 and is forecast to run for one stand rotation, or approximately 80 to 100 years. The project is centred at the University of Alberta and is a collaboration between numerous research agencies, governments, and industry. Education is important. We need conservation training at university levels to promote qualified science teachers who are committed to conservation education at every level of learning, from early school years to post-secondary.

Positive stories can be traced to the efforts of passionate people, whom I call “shin kickers.” My generation of shin kickers is disappearing: now passed are Douglas Pimlott (1920–1978), a founder of the environmental movement in Canada; William Fuller (1924–2009), prominent Canadian ecologist and my mentor; David Schindler (1940–2021), whose groundbreaking research linking industry to water pollution placed him in the Order of Canada and awarded him many international accolades; Stan Rowe (1918–2004), founding member of the Canadian Council on Ecological Areas and author of many books on ethics and conservation; and so many others from their era. Are new people stepping up to replace these leaders from the past? Will you be among the ranks of the next generation of passionate shin kickers?

Baselines continue to shift when conservation objectives are reset with each passing generation based on existing conditions, locking in losses that have already occurred. To prevent shifting baselines, new value systems must evolve. I believe that it is not only critical for a new generation of shin kickers to take up the torch and carry on the fight, but they must also ensure that the history, the documentation, the stories and anecdotes, the memories of the way things were do not get tucked away into dusty archives or lost altogether.

Dr. Lu Carbyn, Past President and current Vice-President of Nature Alberta, is a retired research scientist from the Canadian Wildlife Service. He has written six books, one of which, The Buffalo Wolf, won the Canadian National Geographic Society’s Best Wildlife Book of the Year award in 2004. He is currently an adjunct professor at the University of Alberta. Lu thanks Erin McCloskey for adapting this article from The Life and Times of Grandpa Lu, A Biography, Volume 6.