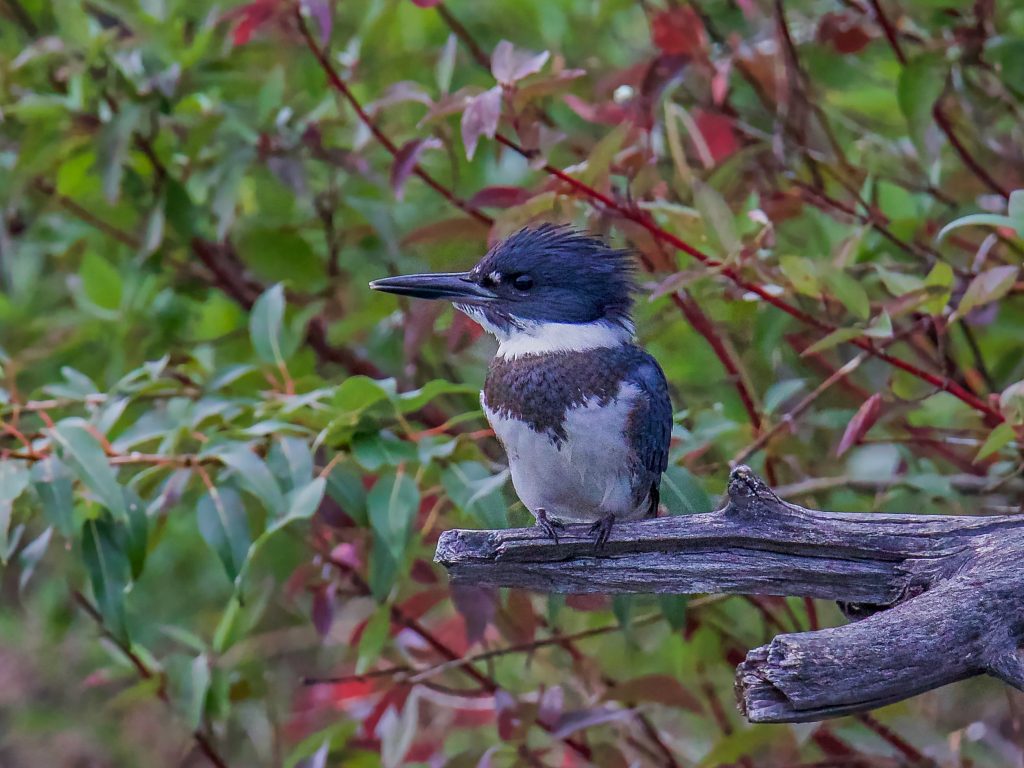 If you spend time along rivers or small lakes this summer, you may be lucky enough to spot a kingfisher. There are many kinds of kingfishers in other parts of the world but in Canada we only have one species: the belted kingfisher.

The belted kingfisher is a striking bird with a blue back and head and a white breast broken by a blue collar. Their large heads have a distinctive ragged crest and a long, thick bill. The females have red in the neck band and along their sides. The kingfisher call is a repeated rattle that they use when both flying and perching.

You will most often see kingfishers hovering over the water or sitting on a shoreline perch. When they spot a small fish, they plunge down to grab it and then return to the perch. There they whack the fish against a branch before swallowing it head first. In addition to fish, kingfishers also eat frogs and large aquatic insects.

Kingfishers are one of only a few birds that actually nest in burrows. The nest cavity is an enlarged space at the end of a one- to eight-foot-long tunnel in a steep bank. Most often they nest along rivers, but they will also use banks along roads and even in gravel pits. Kingfishers are very territorial and the nesting pair will defend both stream and bank for as much as a kilometre.

By June, five to eight white eggs are laid in the burrow on the bare ground. Once they hatch, chicks are fed by both parents for a month before leaving the nest. It isn’t easy diving for your dinner, so the youngsters spend another few weeks with their parents learning the tricks of the trade.

Like most birds that feed in the water, kingfishers stay in Alberta until around the middle of October. Some may over-winter in areas where the water stays open. Migrating birds travel as far as Central America to spend the cold months either along the coast or on inland rivers and lakes. 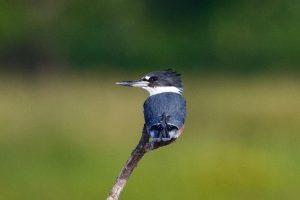 The biggest threat facing kingfishers is loss of shoreline habitat, but populations seem to be stable. They are also sensitive to disturbance and avoid areas with lots of human activity. Kingfishers don’t have many predators, but hawks do kill some young birds and minks occasionally make their way into nest burrows.

The next time you visit a riverbank, listen for the rattle of the kingfisher. It is always a pleasure to watch a real master catching fish.

Margot Hervieux is a founding member of the Peace Parkland Naturalists, an honorary member of Nature Alberta, and a longtime Nature Alberta board member. A version of this article originally appeared in her “Naturally Yours” column in the Peace Country Sun, which she has been writing for 15 years. You can read more of her archived columns at peacecountrysun.com.