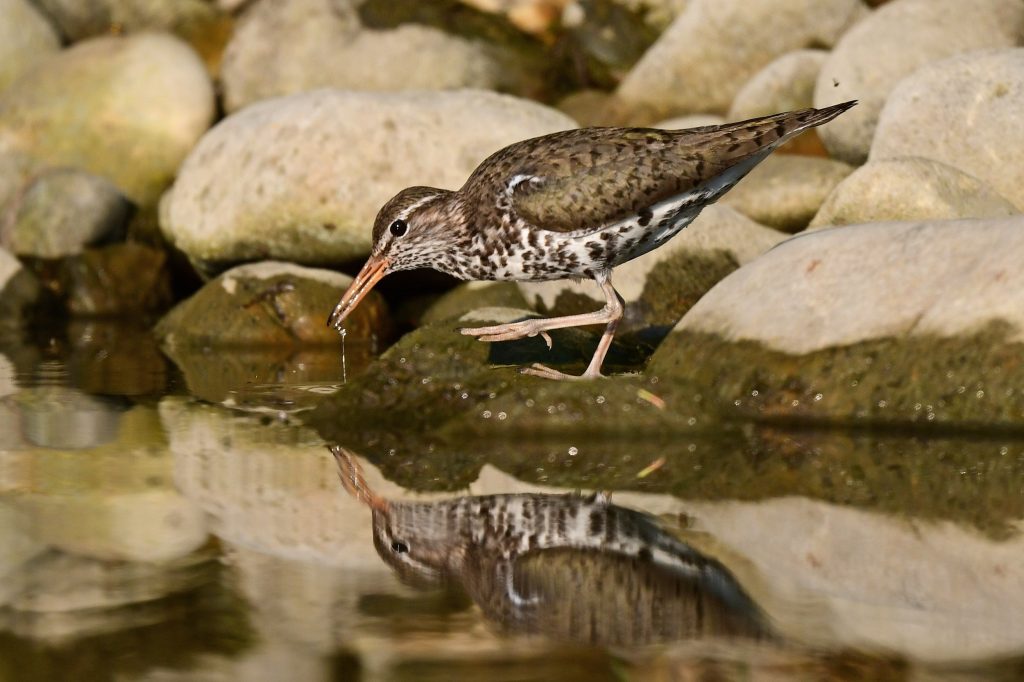 One beautiful June morning, I savoured a spectacular Sylvan Lake sunrise from the seat of my kayak. As I approached the west shoreline, I noticed a pair of spotted sandpipers bobbing along a small stretch of beach. As I paddled closer, two little fluffballs suddenly materialized! An adult, alarmed by my approach, sent the young scurrying back into the thick shoreline grass. I noted the location and paddled on.

I returned to the same spot on my way back. This time, there were two adults, but neither were overly alarmed. I let the kayak drift closer and, with camera in hand, hoped to catch another glimpse of the young. Suddenly, four tiny sandpipers emerged! Daintily tiptoeing on garishly long toes and bobbing their shaggy little tails, these balls of fluffy feathers, oblivious to my presence, pecked and poked for edible tidbits, stretched, groomed, and sipped dewdrops from the undersides of leaves. One even had a short nap. After several glorious minutes, they retreated into the grass and disappeared. I backed away quietly and paddled home. What an awesome (and “awww”-some) way to start a day!

Unlike most other Alberta shorebird species, which often nest in the north and can be difficult to identify, spotted sandpipers are common and can be easily recognized by their dark chest spots, teetering gait, and shallow, stiff flight pattern. Juveniles, which lack spots, can be identified by their dark eyeline, white eye ring, short yellow legs, and a white spur at breast sides.

Spotted sandpipers can breed in a variety of locations, as long as three habitat requirements are met: a stretch of freshwater shoreline for foraging, bathing, drinking and displaying; some semi-open areas for nesting; and patches of dense vegetation for brood cover.

Spotted sandpiper nests are usually located close to water, under the shade of a plant. If predators are numerous, nests are tucked into protected areas such as patches of nettles or raspberry thickets. Several nests are usually started but then abandoned. Once a pair is bonded, the final nest — consisting of a shallow depression scraped out of the soil and lined with dead grass — is started by the female and finished by the male.

Sandpipers lay eggs in clutches of three to five, which are then incubated for about three weeks, usually by the male. Some females are monogamous and tend their young jointly with their mate. Others will mate with up to four males and leave it to the males to incubate the eggs and tend the chicks. Amazingly, females can store sperm for up to a month and, because they have so many mates, the young in each clutch may have different fathers.1 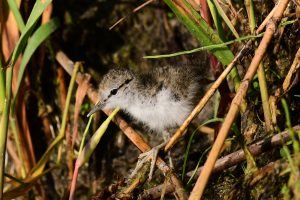 The young are precocial — at two hours old they can peck, preen, and eat, and by four hours they can stretch and walk. Nevertheless, they stay in or close to the nest until a few hours after the last egg hatches. The young can lift off the ground at about 11 days and are capable of sustained flight by 18 days of age. It is not known at what age they become independent.

Some other interesting spotted sandpiper facts:

I returned to the same area almost a month later, this time on a smoky, overcast morning. Lo and behold, there was another batch of little sandpipers patrolling the same stretch of beach. Based on what I have learned about this species, I suspect that Mrs. Sandpiper had handed her first brood off to Dad and then, with Husband Number 2 (or perhaps 3 or 4), mothered another batch. Whatever the circumstance, my summer paddle was greatly enriched by encountering and watching these interesting and engaging little shorebirds.

Nature Alberta has published a helpful guide to Shorebirds of Alberta. It can be downloaded at naturealberta.ca/guides-checklists

Myrna Pearman is a retired biologist, and a keen nature writer and photographer. She has written several books, which can be ordered from www.myrnapearman.com. She can be reached at myrna@myrnapearman.com