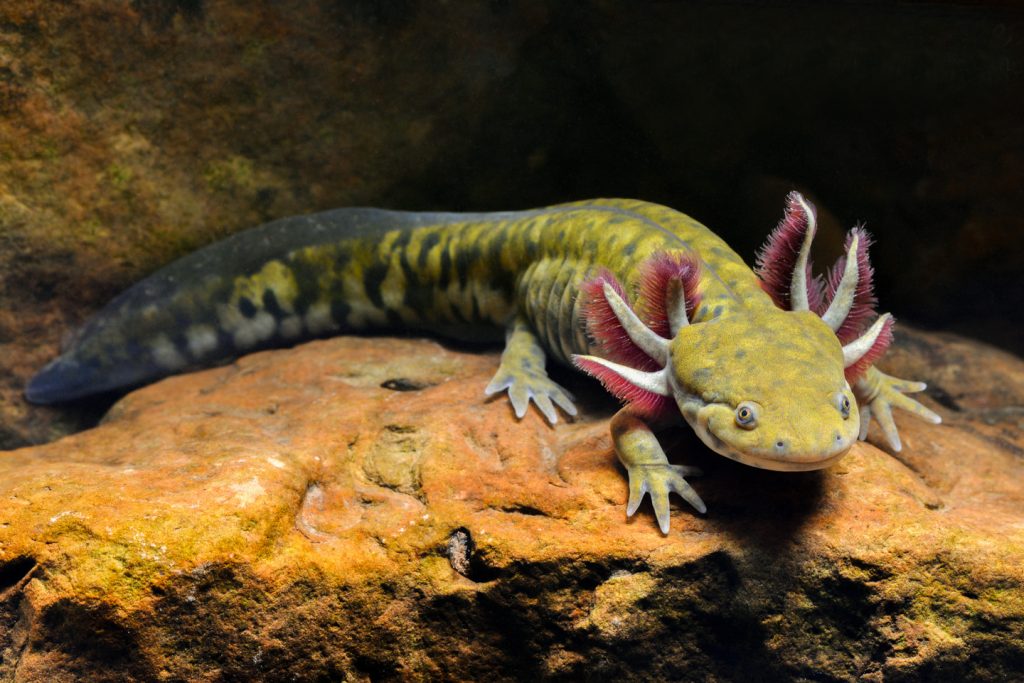 I was seven years old when I first saw Alberta's elusive tiger salamander. Nearly six inches long and smooth, I can still remember its richly colored body: black stripes and splotches contrasted against olive green. It was easy even for a child to see how this salamander's coloration was reminiscent of its big-cat namesake. But stripes were not the only tiger-like feature it possessed: tiger salamanders have a voracious appetite and a wide mouth that allow them to feed on a wide range of prey, including subterranean worms, beetles, and the occasional small vertebrate.

This particular salamander I encountered, however, fed on pet-store crickets and was affectionately named “Speedy” by my Grade 2 classmates. Despite the occasional nipped finger (due to their superficial similarity to worms) he was a beloved classroom pet, and more importantly, he was our glimpse into the lives of Alberta's lesser-known amphibians.

The tiger salamander is one of only two species of salamander in Alberta, the other being the long-toed salamander found in alpine habitats. Tiger salamanders are widely distributed across the central interior of North America, as far south as Texas. Within Alberta, they are found in short-grass prairie, aspen parkland, and southern regions of boreal forest.

The tiger salamander's exotic coloration and impressive size are not typical of northern amphibians. From the tip of their snout to the tip of their tail, an adult salamander can grow to nearly nine inches long. Young salamanders have brighter coloration than older individuals, whose spots and stripes may fade into a uniform olive, brown, or black color.

Adult tiger salamanders spend much of their time in underground burrows and therefore are seldom seen. In early spring, they return to permanent and fishless water bodies to mate. Like frogs, salamander eggs hatch into aquatic larvae (i.e., tadpoles) that later metamorphose into terrestrial adults. But unlike frogs, they possess a set of fringed gills as tadpoles (see photo) and they retain their tail into adulthood. Development from egg to adult typically occurs in just three to four months, and they must leave their shallow wetland to seek shelter underground before the winter freeze.

Although capable of digging, tiger salamanders will often exploit abandoned tunnels of burrowing mammals. In urban areas, tiger salamanders use man-made water bodies for breeding, and shaded damp areas along river valleys provide them with plenty of suitable prey and fallen debris for cover. Urban residents are often surprised to learn that they share their city with tiger salamanders. Encounters are uncommon but do happen on occasion. Tradesmen and laborers have reported seeing tiger salamanders unearthed during excavations. And residents living near aquatic habitats sometimes find themselves assisting in a morning rescue mission to free a hapless salamander that toppled into a window well the night before.

Despite their wide distribution and seemingly stable population, tiger salamanders are listed as a “special concern” species by the Canadian Species at Risk Act. Threats to amphibian populations are steadily increasing worldwide, and compounded perils could see the decline of even the hardiest of amphibians. In Alberta, tiger salamanders are affected by the loss and degradation of their habitats due to industrial development. Expanding residential areas and their subsequent road developments are causing more salamander road mortality as adults attempt to cross to fragmented wetlands to breed. Outdoor cats and recreational fish stocking are increasing predation, and the spread of disease such as rana viruses and chytrid fungus can devastate local populations. Clearly, there is a need for studies that not only monitor population trends but delineate favorable habitat for future land conservation.

Speedy the salamander may have been my first encounter with Alberta's tiger salamander, but he was not my last. Over the years I have been lucky to witness wild salamanders in their natural environment where they occupy a unique ecological niche. In shallow water bodies that cannot support fish, tiger salamanders are the largest aquatic predator and influence the composition of aquatic food webs. Their presence, like that of frogs, is indicative of a healthy aquatic ecosystem. 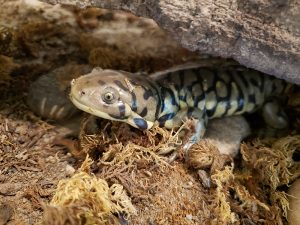 Looking back, I recognize that Speedy's original captor had good intentions of teaching our class about this unusual animal. But tiger salamanders are not meant to be pets. Speedy eventually came home with me after class let out for the summer. He was treated to evening romps in the backyard by my mother, whose deep appreciation for Alberta's wildlife preceded my own. By “accident” one night, Speedy evaded her notice and disappeared into the brush of the garden. I have no doubt he eventually returned back to the river valley across our quiet street. I couldn't stay sad about his departure for long. After all, it was summer. His job of teaching was done.

Cheryl Tebby is a long-time amphibian admirer and the treasurer of the Alberta Amphibian and Reptile Conservancy. Questions and comments can be directed to aarceducationandoutreach@gmail.com